Donald Trump tops The Hill’s rankings of 2016 GOP candidates for the first time, as the race cranks up to a new level of intensity with debate season underway.

Trump has utterly transformed the race, challenging conventional wisdom every step of the way. The Hill did not even rank Trump when we first assessed the field in May, and he came in eighth in our most recent version in early July.

Elites continue to scoff at Trump, but he is unarguably the front-runner for the nomination at this point. Trump has held the lead in national polling averages since mid-July and has not come close to relinquishing it. He also tops polls in the first three states of Iowa, New Hampshire and South Carolina. His ratings were not dented by the furor that surrounded his performance in the first GOP debate on Aug. 6, his subsequent attacks on Fox News anchor Megyn Kelly or any number of less prominent controversies.

The bad news: Trump could easily come undone. GOP insiders fret about his chances in a general election, he is likely to face sharper attacks as time goes on and, for many Republican voters, the novelty of his candidacy could simply wear off.

Bush holds the No. 2 spot despite having had an unimpressive stretch in his campaign. The fact remains that one of the 17 candidates running will emerge as the choice of the GOP establishment, that candidate will be formidable and Bush — with his last name and prodigious fundraising capacity — remains the best fit for the role.

The bad news: His performance at the first debate was widely criticized as insipid. He has grappled with how to deal with Trump. Perhaps most worryingly for his backers, his propensity to commit unforced errors remains: In late August, he offered the awkward explanation that the term “anchor babies” was more relevant to “Asian people” than other ethnicities. 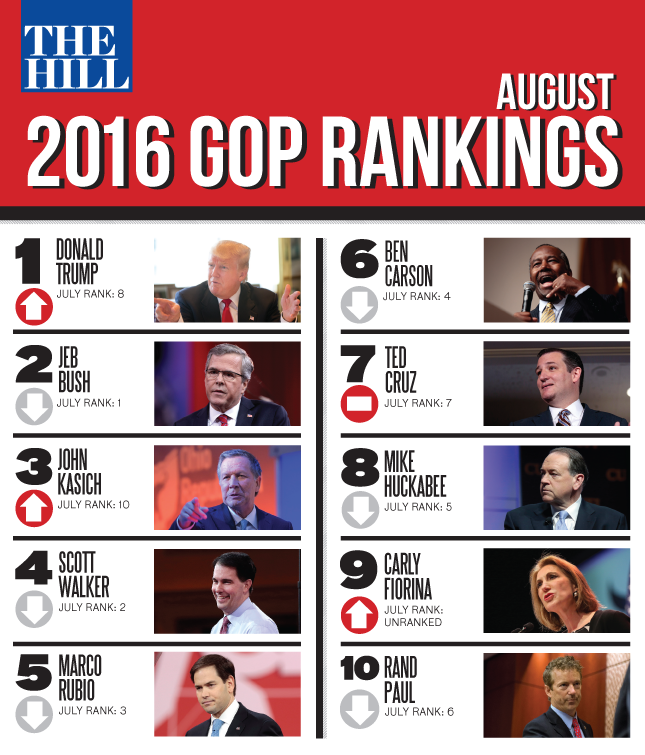 Kasich has come from the margins of the race to pose a serious challenge — particularly to Bush, whose overall strategy the Ohio governor would destabilize if he won the New Hampshire primary. Kasich is second in the RealClearPolitics average in the Granite State at the moment, behind Trump but, crucially, ahead of Bush. Kasich’s status as the popular governor of a critical battleground state also impresses those GOP voters desperate to find a winner next November. He has momentum on his side.

The bad news: Bush is better-resourced and better-known, while more avowedly conservative candidates than either him or Kasich could be more closely in step with the GOP grassroots. The calendar is also forbidding for Kasich, front-loaded with trenchantly conservative electorates in Iowa, South Carolina and in the “SEC primary” on March 1, when a number of Deep South states vote.

Walker is currently one of the most difficult candidates to rank, because he has sharply declined yet remains competitive in overall polling averages. Walker can draw upon a reservoir of goodwill among conservatives because of his battles with labor unions in Wisconsin, but he needs to turn things around quickly.

The bad news: Walker has lost his early polling lead in Iowa and has fallen in New Hampshire as well. Part of his problem was a bland performance in front of the 24 million people who watched the first debate. But a days-long process of flip-flopping over birthright citizenship in mid-August also deepened the skepticism of those who doubt that Walker can play at the highest level.

On paper, the Florida senator has formidable strengths: charisma, oratorical skill, a Cuban heritage that could appeal to Hispanic voters and a relative youth and freshness that would contrast strongly with Democratic front-runner Hillary Clinton. He delivered a polished performance at the first debate.

The bad news: Is he one of those Republican presidential candidates who is more beloved by media pundits than by actual voters? He’s going nowhere fast in the polls: tied with two others for fourth in the RCP national average, tied for sixth in Iowa and 10th in New Hampshire. Any serious candidate needs to notch at least one victory early on, and it is not obvious where that will come for Rubio.

Carson continues to perform well in many polls, currently sitting second in the RCP national average. There is a case to be made that he got a slight bump out of the first GOP debate in Cleveland. Carson was also second to Trump in the most recent poll out of South Carolina, suggesting real strength in the Palmetto State.

The bad news: There are still big question-marks over Carson’s lack of political experience and the strength of his campaign infrastructure. It’s easy to see him rack up some impressively high finishes; it’s a lot tougher to see outright victories — or a plausible path to the nomination.

Cruz seemed to enjoy a slight uptick in the polls after the first debate. He is canny in appealing to conservative voters, as seen in his efforts to defund Planned Parenthood. He has also been more generous in his comments about Trump than many of the other contenders, presumably hoping to become the second-choice of many people currently backing the mogul.

The bad news: Concerns over his capacity to appeal to voters beyond the most conservative wing of the GOP loom large, as do fears in some quarters that he would be unelectable in November 2016.

Huckabee clearly has a constituency within the GOP, centered upon evangelicals. He also has considerable retail-politicking skills. The former Arkansas governor had a solid debate performance, but others with ideological similarities to him, such as Carson and Cruz, seemed to benefit more from the encounter.

The bad news: Huckabee is only eighth in the RCP average in Iowa. The state is a virtual must-win for him since the less ideologically hospitable territory of New Hampshire follows immediately afterward. Huckabee’s very narrow path to overall victory depends upon his becoming the clear choice of social conservatives. He has lost ground to Cruz in that regard since the last Hill rankings.

The former Hewlett-Packard CEO, the sole female contender in the GOP field, clearly helped her cause with a very strong performance on the day of the first debate in Cleveland. Fiorina was widely seen as the stand-out in an earlier forum featuring candidates who were polling outside the top 10 nationally.

The bad news: Fiorina is polling at a respectable level almost everywhere, but she does not seem to have a realistic chance of winning anywhere. Furthermore, it’s not obvious what ideological niche she would fill that is not already occupied by higher-profile contenders.

A candidate who attracted considerable media attention, particularly in the early days of his bid, Paul has drifted gradually downward in the polls.

The bad news: There is no strong reason to believe he can reverse his decline. The RCP averages have Paul 10th nationally, ninth in Iowa, ninth in New Hampshire and a dismal 12th in South Carolina. Paul is a known quantity, and GOP voters simply aren’t buying what he’s selling.