IOWA CITY, Iowa – Political observers may be interesed in whether state Sen. Joni Ernst (R) can turn the U.S. Senate red — but on Saturday, most Iowans seemed more concerned about how the black-and-gold Iowa Hawkeyes would fare against their arch-rival, the cardinal-and-gold Iowa State Cyclones.

Ernst, an Iowa State alum who hails from the pro-ISU western half of the state, refused to pick sides in the civil war battle, though she’d joked to man in a Cyclones sweatshirt the evening before at the GOP victory office that she had a lot of gear that “looks a lot like that.”

“Today I am neutral, may the best team win,” she told reporters. “It’s just fun for everyone.” 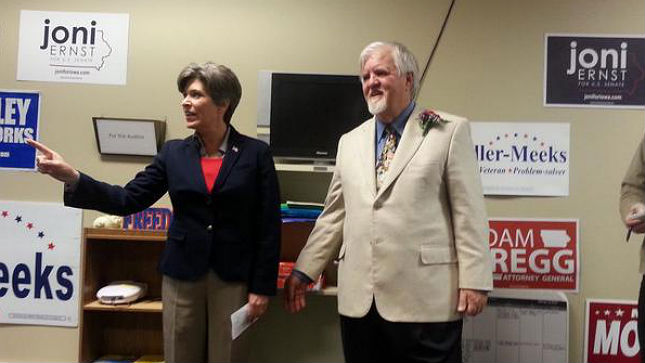 The state senator and Iowa National Guard lieutenant colonel is locked in a tight race with Rep. Bruce Braley (D-Iowa) that could decide the fate of the Senate. Braley, who went to Iowa State for undergrad and got his law degree from Iowa, was nowhere to be found on Saturday.

Ernst was focused on meeting voters at the tailgate, but despite the best efforts of her campaign she kept getting stuck talking to national reporters in town for former Secretary of State Hillary Clinton’s first appearance in the Hawkeye State since her 2008 presidential bid.

“It is going to be extremely competitive, we are running neck-and-neck,” she told reporters of her own race. “But I can tell you as a southwest Iowa farmgirl from one of the most rural parts of the state that’s up against big-time incumbent Congressman Bruce Braley, and we’re neck-and-neck, so I feel very good about where we are and where we’re going.”

Branstad, a big Ernst backer, touted her record as a commander in the national guard, her agriculture background and her support for his budget-balancing initiatives in the state. He admitted Democrats’ advantage in outside group spending had done some damage and tightened the race, but pointed out that she won her primary despite being vastly outspent and said the spending gap would close as election day neared.

“Joni Ernst will win, but it’s going to be a very close race,” Branstad said. “If you look at what happened in the primary she was very heavily outspent… she’s going to be able to come close, maybe not spend as much money as Braley but it’s not just money, it’s also the individual and their stand on the issues and whether they’re in tune with Iowa.”