Burger King mocks Trump over misspelled tweet: ‘We’re all out of hamberders’

The fast food chain Burger King took aim at President Trump on Tuesday over his mention of “hamberders” in a recent tweet.

“Due to a large order placed yesterday, we’re all out of hamberders,” the chain said in a tweet from its verified account on Tuesday morning. “Just serving hamburgers today.”

due to a large order placed yesterday, we’re all out of hamberders.
just serving hamburgers today.

The jab arrives on the heels of a tweet shared by Trump hours before in which he boasted about the number of “hamberders” he served Clemson University’s championship football team during their visit to the White House on Monday.

“Great being with the National Champion Clemson Tigers last night at the White House. Because of the Shutdown I served them massive amounts of Fast Food (I paid), over 1000 hamberders etc,” Trump said in the since-deleted tweet.

{mosads}“Within one hour, it was all gone. Great guys and big eaters!” he added. 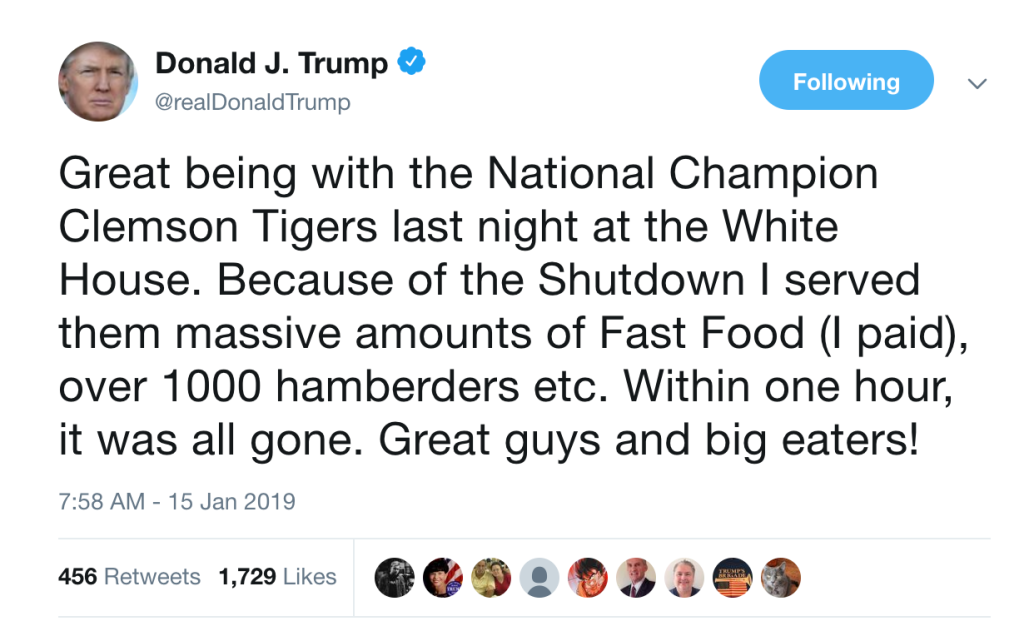 During the Clemson University Tigers’s visit to the White House on Monday, Trump not only served food from Burger King, but also from other fast food chains McDonald’s, Wendy’s and Domino’s Pizza.

The White House said in a statement later on Monday that the president wanted to host a “fun event to celebrate” the team’s victory, but “because the Democrats refuse to negotiate on border security, much of the residence staff at the White House is furloughed.”

“So the President is personally paying for the event to be catered with some of everyone’s favorite fast foods,” the statement read.

Cheney amps up pressure for Cipollone to testify