Ensuring every community in America has access to high-quality broadband

As we video-call people across the world, access eBooks at our fingertips, and integrate online activities into our everyday lives, we often take for granted the underlying broadband transport that enables them.  Wireless antennas fill the airwaves above the earth with digital code, and fiber optic cables weaving below our soil make this interconnected communications possible. Even though people use elusive terms like “the cloud,” broadband networks are just as physical an infrastructure as our nation’s bridges, roads, and sewers. In fact, broadband is a “meta-infrastructure” that enhances transportation, electricity, and agriculture.

{mosads}The recent “Infrastructure Week” showed that broadband is finally receiving the attention it deserves. Panels ranged from “The Future of Smart Cities” to “The Future of Agriculture and Broadband.” It is no coincidence that when experts discuss the future of our nation, Internet access is the first bullet point. Smart cities, agriculture, digital learning, telehealth, civic engagement, and even self-driving cars all rely on robust broadband.

Unfortunately, we do not have that robust broadband yet. According to the Federal Communications Commission (FCC), more than 30 million Americans lack access to adequate broadband. These numbers are even worse in our heartland where 39 percent of rural Americans (23 million people) lack access to 25 Megabits per second (Mbps). The number jumps up to 41 percent on Tribal lands.  The U.S. ranks 23d in terms of number of consumers connected to fiber optic networks, right behind Mexico. 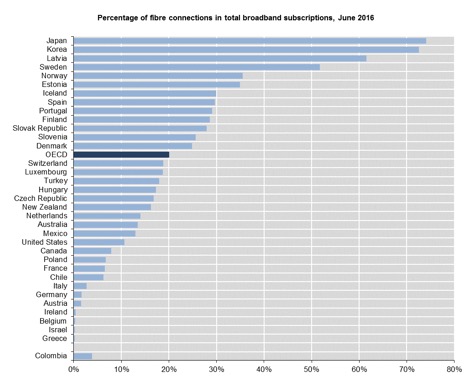 Two bills have been proposed recently to address this shortage of broadband connectivity.  Sen. Shelley Moore Capito (R-W.Va.) introduced the Gigabit Opportunity Act or GO Act, and the Democrats on the Energy and Commerce Committee introduced the LIFT America Act, a broad infrastructure package.

Both of these bills recognize that broadband access is key to economic growth and job creation and attempt to solve the problem through targeted government action.  Yet they diverge on how to get there.

The GO Act, based on FCC Chairman Pai’s Digital Empowerment Agenda, would amend the Internal Revenue Code by proposing tax changes to give private sector companies a greater incentive to deploy broadband in low-income areas called “Gigabit Opportunity Zones.” GO Zones are defined as geographically concentrated areas that are facing obstacles to economic and broadband development.

Tax changes, however, may not move the broadband needle in rural areas.  Due to geographic barriers and lower population density, rural areas have significantly higher upfront costs and may not generate any return on investment. Since there is no profit to tax, tax credits become irrelevant. Instead, direct funding is needed to connect high-cost areas to high-capacity broadband.

The LIFT America Act proposes $40 billion over five years for deploying secure and resilient broadband networks. Three quarters of the funding will be used for a national reverse auction for unserved areas of the country. The other $10 billion will be directed towards separate state-wide reverse auctions. If there are no unserved areas in a state, those funds can be used to connect schools and libraries or deploy a Next Generation 9-1-1 network.

The reverse auction model, which was used successfully by the FCC to allocate spectrum, guarantees an open application process. The government would not be able to give preference to certain types of providers but instead encourage competition amongst traditional telecommunications carriers, cable companies, wireless companies, municipal networks, research and education networks, and other non-profit providers.

In addition, the LIFT America Act recognizes that schools, libraries, clinics, hospitals and other community anchor institutions are essential to closing the digital divide. Connecting to and through our anchors is the most efficient and cost-effective way to ensure that every community in America has access to high-quality broadband. While residential deployment connects one household at a time, deploying broadband to a school or library with a network that is open to interconnection and sharing benefits an entire community.

The Schools, Health & Libraries Broadband (SHLB) Coalition, along with 30 companies, schools, libraries and other organizations, sent a letter to President Trump last week summarizing these recommendations. The letter urged the Trump administration to recognize the role of anchor institutions as gateways to the community, include direct funding toward rural markets, and implement an open application process that does not pick winners and losers.

There are many solutions to broadband deployment – tax credits, direct funding, public-private partnerships, state matching, “Dig Once,” etc. No one solution is the answer.  Connecting  Americans coast to coast requires coordination and a combination of funding and best practices. Broadband is a bipartisan issue, and Republicans and Democrats are both developing proposals to connect our nation. Now is the time to GO, to LIFT, and to ACT to build future-proof networks that will boost our nation into the digital age.

John Windhausen is the Executive Director of the Schools, Health & Libraries Broadband (SHLB) Coalition. SHLB is the leading advocate for open, affordable, high-capacity broadband for our nation’s anchors and their communities. Its upcoming conference “United States of Anchors,” May 31 – June 2 in Crystal City, Va., will present a deep-dive on issues of broadband deployment, digital inclusion, and more. Learn more at 2017conference.shlb.org.

The views expressed by this author are their own and are not the views of The Hill.

Action to break up ‘Big Tech’ will mean price hikes

Proposed US crackdown on ‘Big Tech’ has one winner: China