The White House turkeys have officially arrived in Washington, D.C., for the pardoning ceremony, which is set to take place on Tuesday.

The White House announced the news on its Snapchat and Instagram accounts.

The White House confirmed to The Hill that the two birds will be staying in the Willard Intercontinental Hotel, where rooms reportedly can cost between $200 to $3,500 per night. 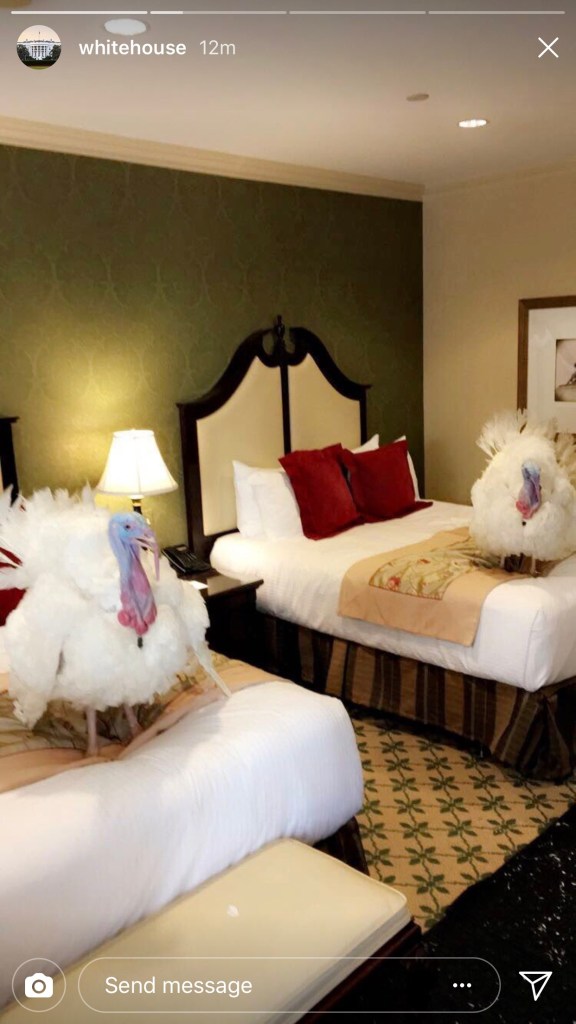 The National Turkey Federation will foot the bill for the birds’ lodgings, as it has in the past, according to the White House.

This is not the first time turkeys have stayed in the luxury hotel before they are pardoned by the commander in chief.

Birds have stayed in the hotel while they were prepped for the traditional Thanksgiving ceremony at the White House in past years.

{mosads}Past birds have stayed in the W Hotel before being sent to Mount Vernon after they are pardoned, according to Time Magazine.

The National Turkey Federation first presented a turkey to President Harry Truman in 1947, making this year the 70th anniversary of the tradition.

However, former President George H.W. Bush started the tradition of pardoning turkeys in 1989.

This year’s birds were raised in western Minnesota under National Turkey Federation Chairman Carl Wittenburg, according to the White House.

The turkeys will reside at “Gobbler’s Rest” on Virginia Tech’s campus after the ceremony, where they will join last year’s birds that were pardoned by former President Obama.

The names of the birds will be released on social media shortly before the ceremony on Tuesday.

In Brazil’s election, democracy and the future of our planet are on the ballot