The 29-year-old musician who for years stayed mum about her political leanings has begun speaking out against inequality, sexism and President Trump.

Swift burst onto the country music scene, a genre historically popular with many southerners and conservatives, even before she was legally old enough to vote and has slowly evolved to become a political powerhouse.{mosads}

The all-American country star never publicly talked about current events or politics but acknowledged supporting former President Obama in 2008 — her first election as a voter.

“I’ve never seen this country so happy about a political decision in my entire time of being alive,” she told Rolling Stone a year later.

However, the singer was noticeably quiet during Obama’s reelection in 2012 despite a long list of singers like Beyoncé, Katy Perry and Lady Gaga who endorsed him.

Swift, then 22, maintained that she was following the election to keep herself “as educated and informed as possible.”

“I don’t talk about politics because it might influence other people,” she told Time magazine. “And I don’t think that I know enough yet in life to be telling people who to vote for.”

Swift’s long-standing feud with rapper Kanye West escalated in July 2016 when his wife, Kim Kardashian West, posted a secret recording of a conversation between the two regarding controversial lyrics in his song, “Famous.” West has since become an outspoken Trump supporter and Kardashian has worked with the Trump White House on criminal justice reform measures.

After the fierce fallout on social media, Swift stepped away from the limelight and took a break from posting online.

As then-business mogul Donald Trump rose to more prominence in conservative circles, white supremacists joined the Swift fandom and latched onto a theory that Swift supported him.

The blonde-headed girl from Pennsylvania was dubbed a “pure Aryan goddess” by neo-Nazis, Vice reported in 2016.

Andrew Anglin, the writer of the white supremacist blog The Daily Stormer, guessed that Swift was “waiting for the time when Donald Trump makes it safe for her to come out and announce her Aryan agenda to the world. Probably, she will be betrothed to Trump’s son, and they will be crowned American royalty.”

The election came and went without Swift making a formal endorsement for either Trump or former Secretary of State Hillary Clinton, the first woman to be nominated for the White House by a major political party.

Swift did, however, post a photo at a polling station. 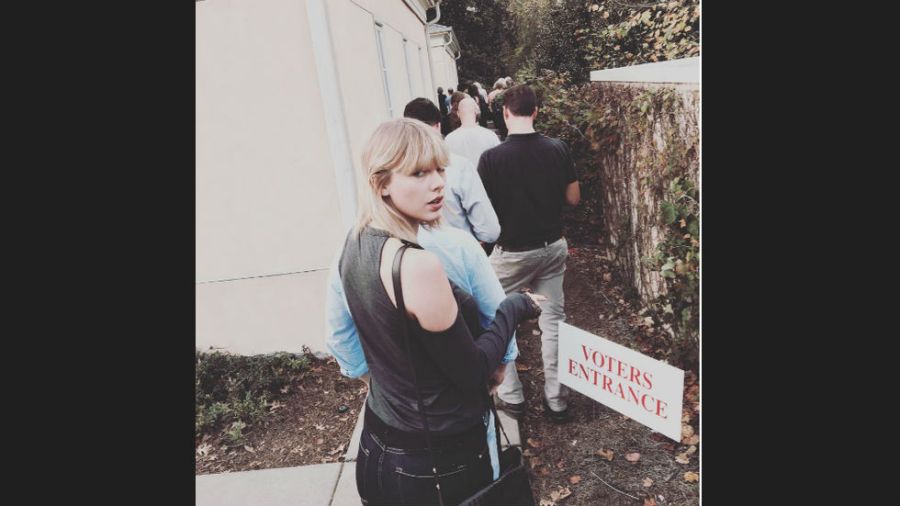 As a pop star who embraced feminist titles and hung out with a glamorous “girl squad,” Swift was slammed by critics for not attending any of the inaugural Women’s March events in January 2017 as other A-listers Madonna, Miley Cyrus, Rihanna, Ariana Grande and Demi Lovato did.

“So much love, pride, and respect for those who marched,” she wrote in a tweet that was deleted when she scrubbed her social media platforms for the “Reputation” album release. “I’m proud to be a woman today, and every day. #WomensMarch.”

In August of that year, months before the rise of the “Me Too” movement, Swift won a public battle against a former radio host she accused of sexual assault.

Swift said DJ David Mueller groped her during a Denver meet-and-greet with fans. He sued her after being fired by the radio station and the star countersued for sexual assault, asking for a symbolic $1.

Her sharp rebuttals under questioning from Mueller’s attorney went viral.

“I am not going to allow your client to make me feel like it is any way my fault, because it isn’t,” she fired back when asked about Mueller losing his job. “I am being blamed for the unfortunate events of his life that are a product of his decisions and not mine.”

Shortly after, dozens of women came forward to accuse Hollywood mogul Harvey Weinstein of sexual misconduct. His fall from grace captured media headlines and encouraged women to come forward with their allegations against powerful men in several different industries including politics, media and business.

Swift was on the cover of Time magazine’s 2017 Person of the Year as one of the “Silence Breakers.”

While the “Shake It Off” singer never publicly acknowledged the buzz in alt-right internet circles about her, she legally went after those who compared her to white supremacists.

Meghan Herning, the executive editor for Popfront, wrote an article that accused Swift of using white supremacist rhetoric and imagery in the lyrics and music video for her “Look What You Made Me Do.”

“Many on the alt-right see the song as part of a ‘re-awakening,’ in line with Trump’s rise,” Herning wrote. “At one point in the accompanying music video, Taylor lords over an army of models from a podium, akin to what Hitler had in Nazis Germany. The similarities are uncanny and unsettling.”

Swift and her attorney responded with a cease-and-desist letter, according to a letter obtained by the American Civil Liberties Union (ACLU).

“The notion that Ms. Swift supports white supremacy is utterly fabricated and a reprehensible falsehood, and it attempts to portray Ms. Swift in a false light. Let this letter stand as a yet another unequivocal denouncement by Ms. Swift of white supremacy and the alt-right,” the letter reads. “Moreover, Ms. Swift has not remained silent regarding this issue, and she has made clear that she does not approve of any association with such repugnant groups or their beliefs.”

The letter reiterated that Swift has no obligation to campaign for a candidate or talk politics.

Herning contacted the ACLU, which argued that the blog post was opinion protected by the First Amendment. She said in a statement that she would not be “bullied” by the megastar.

The post was never taken down and it does not appear that Swift’s team took the case to court.

Swift’s lawyer, J Douglas Baldridge, in 2013 sent a similar letter to a Pinterest user who falsely attributed Adolf Hitler quotes to the songstress, according to a copy obtained by Broadly. The social media site reportedly refused to the posts take down.

Swift made her first public call for gun control in March 2018, donating an undisclosed amount to the March for Our Lives rally organized by survivors of the Parkland, Fla., school shooting.

“No one should have to go to school in fear of gun violence,” the previously apolitical Swift wrote in an Instagram caption. “Or to a nightclub. Or to a concert. Or to a movie theater. Or to their place of worship.”

“I’ve made a donation to show my support for the students, for the March For Our Lives campaign, for everyone affected by these tragedies, and to support gun reform,” she added. “I’m so moved by the Parkland High School students, faculty, by all families and friends of victims who have spoken out, trying to prevent this from happening again.”

She wrote that then-Rep. Marsha Blackburn’s (R) voting record “appalls and terrifies” her.

“She voted against equal pay for women. She voted against the Re-authorization of the Violence Against Women Act, which attempts to protect women from domestic violence, stalking, and date rape. She believes businesses have a right to refuse service to gay couples. She also believes they should not have the right to marry.”

In addition to the endorsement, Swift listed her stance on a number of political issues.

“I always have and always will cast my vote based on which candidate will protect and fight for the human rights I believe we all deserve in this country,” Swift wrote. “I believe in the fight for LGBTQ rights, and that any form of discrimination based on sexual orientation or gender is WRONG. I believe that the systemic racism we still see in this country towards people of color is terrifying, sickening and prevalent.”

“I cannot vote for someone who will not be willing to fight for dignity for ALL Americans, no matter their skin color, gender or who they love,” she added.

⬆️These two Tennessee women⬆️ voted for the candidate who has proven himself to be reasonable and trustworthy. We want leadership, not fear-based extremism. Early voting goes til Thursday and Election Day is November 6. Please don’t sit this one out.

Blackburn ultimately won the race but the far-right denounced Swift as a “traitor,” according to a report from The Washington Post.

Despite the backlash from conservatives, Swift reportedly saw a bump in album salesafter endorsing Democrats.

Swift charged ahead by sharing her political views in 2019, writing in an essay for Elle magazine that she is now “finding [her] voice in terms of politics” and wants to “do more to help” ahead of the 2020 presidential election.

“I took a lot of time educating myself on the political system and the branches of government that are signing off on bills that affect our day-to-day life,” Swift wrote. “I saw so many issues that put our most vulnerable citizens at risk, and felt like I had to speak up to try and help make a change.”

She donated $113,000 to an advocacy group working against the “Slate of Hate” in the Tennessee legislature before promoting LGBTQ rights in a star-studded music video.

The “You Need To Calm Down” video, released in June, featured a plethora of LGBT activists such as Ellen DeGeneres, RuPaul and Billy Porter.

Gay rights opponents depicted in the video are seen carrying misspelled protest signs like “Get a brain, morans!”

“You just need to take several seats and then try to restore the peace / And control your urges to scream about all the people you hate / ‘Cause shade never made anybody less gay,” she sings.

The video urged viewers to sign a petition supporting the Equality Act. The bill, which would enshrine protections for LGBT Americans in federal law, passed the House in May but hasn’t been taken up in the Senate.

She gave a nod to the bill during her Monday performance at the 2019 MTV Video Music Awards, where she snagged the coveted title of “Video of the Year,” and knocked Trump for ignoring her Change.org petition.

The half a million signatures is more than “five times the amount needed to warrant a response from the White House,” Swift said while miming tapping a watch.

The White House responded, with deputy press secretary Judd Deere telling CNN that the administration rejects discrimination but does not support the bill.

The “Me!” songstress has also put to rest theories she is secretly harboring support for Trump: She recently accused him of “gaslighting the American public.”

She elaborated in an interview with Vogue on why she didn’t publicly stand with Clinton.

“Unfortunately in the 2016 election you had a political opponent who was weaponizing the idea of the celebrity endorsement. He was going around saying, ‘I’m a man of the people. I’m for you. I care about you,’” Swift said. “I just knew I wasn’t going to help.”

She noted how the election happened while thousands were calling her “calculated,” “manipulative” or a “snake” online.

“These are the same exact insults people were hurling at Hillary. Would I be an endorsement or would I be a liability?” Swift said. “Look, snakes of a feather flock together. Look, the two lying women. The two nasty women. Literally millions of people were telling me to disappear. So I disappeared. In many senses.”

Swift’s latest album “Lover” was released on Friday and scored the highest sales week of 2019 in just one day, according to Forbes.

Despite being the highest-paid celebrity with $185 million in pretax income in the past year, Swift sings that she wouldn’t face as much negativity if she were a man.

“They’d say I hustled, put in the work / They wouldn’t shake their heads and question how much of this I deserve / What I was wearing, if I was rude / Could all be separated from my good ideas and power moves,” she sings in the track “The Man.”

Biden gets the best of GOP