It’s the “most talked about movie of the year … that no one’s actually seen,” according to the tagline for “The Hunt,” the controversial new film released Friday where “deplorables” and “liberal elites” kill each other.

Filmmakers deny the satirical movie was meant to be divisive, but experts say “The Hunt” will do more to inflame the partisan divide than skewer it.

“It’s one thing what a movie-maker intends … in this particular case … ‘a dark horror film satire,’ ” Gene Del Vecchio, an adjunct professor of marketing at the USC Marshall School of Business, told The Hill. “But it’s another thing what an audience actually perceives. Some are still going to see it as a political statement that’s creating divisiveness in the country.”

President Trump is among those who have criticized the film, saying it was “made in order to inflame and cause chaos,” a motive which filmmakers deny.

The characters in the movie hurl politically laden insults at each other like “snowflakes” and “deplorables,” two terms used to refer to those on the political left and Trump supporters, respectively. It is punctuated with references ranging from “the deep state” and “crisis actors” to “cancel culture.”

The movie’s plot involves rich people who mock an unnamed president and raise concerns about cultural “appropriation” and gendered language while hunting people who are characterized as “rednecks,” own guns and express aspirations to be on “Hannity.” 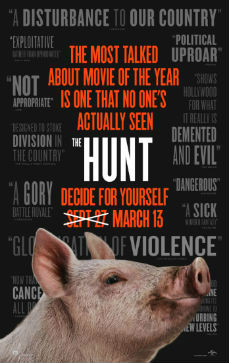 Writers Nick Cuse and Damon Lindelof have said they wanted to explore the way people make quick assumptions about one another in a satirical way. Director Craig Zobel recently told Vulture the film tried “to make every side look bad.” But however playful the filmmakers’ intentions, any political commentary is unlikely to get easy laughs given the current environment, experts told The Hill.

“Our political leaders are more polarized than ever, so any mention of the words ‘liberal elite’ or ‘deplorables’ gets their attention, which spills over to the public’s attention,” Heather Evans, a political science professor at the University of Virginia’s College at Wise, told The Hill.

Last August, the studio behind the film canceled the planned release of the movie a few days after Trump took to Twitter to criticize it.

“The movie coming out is made in order to inflame and cause chaos. They create their own violence, and then try to blame others,” Trump said in a series of tweets. “They are the true Racists, and are very bad for our Country!”

Universal said the movie’s release was delayed due to mass shootings in Texas and Ohio last summer. Both the hunted and hunters in the film use guns, among other weapons.

“We understand that now is not the right time to release this film,” the studio said in a statement.

The movie has been characterized by critics as “The Purge” for MAGA country, a reference to a 2018 horror movie about a society that makes mass crime, including murder, legal for one night every year. Fox News said it “glamorizes the killing of Trump supporters.”

But the movie released Friday follows the template of a revenge story, with Crystal, portrayed by Betty Gilpin, fighting back against the people who kidnapped and hunted her.

Producer Jason Blum told The Associated Press “not one frame, not one line” of the movie has been changed since its delayed release date.

However, the studio has revamped its marketing for “The Hunt” this time around.

“The original marketing was more of a red state [versus] blue state,” Del Vecchio said. “Right now what it looks like is they’re trying to go for horror fans, introducing it on Friday the 13th.”

The movie is bloody, with dozens of characters meeting gory ends. Some of those deaths are framed as punchlines, such as one character who denies she should be shown mercy just because she’s female.

The film currently has a 55 percent rating on the film review aggregator Rotten Tomatoes, with most critics panning its attempt at social satire.

Critics said that might be because it paints its targets with a broad brush.

“I don’t think this film is going to unsettle anybody’s [positions], in part because the positions that it paints are so caricatured and hyperbolic,” Elisabeth Anker, an associate professor of American Studies and Political Science at Columbian College of Arts and Sciences, told The Hill. “It doesn’t seem to me that the film will be able to open people’s minds as much as to potentially skewer their own latent prejudices in a certain way.”

Blum also co-produced “Get Out,” the 2017 race satire that won an Oscar. In production notes for the film, Blum explained the relationship between the movies.

“Jordan Peele’s ‘Get Out’ is about race,” he said. ” ‘The Purge’ is largely about gun control. ‘The Hunt’ is about first impressions.”

Anker said “Get Out” isn’t an ideal comparison for the new movie.

“‘Get Out’ had a really consistent message as a way of challenging the kind of racial violence behind white, moderate, liberal positions and I think this film is much less consistent,” said Anker. “So I’m not sure it will actually have that long-term biting edge effect that a film like ‘Get Out’ has, which is being taught on college campuses across the country.”

“The Hunt” is still an interesting case of freedom of speech running into commercial concerns, according to Del Vecchio.

The studio might be betting on pre-release publicity to generate downstream revenue, for example on streaming channels. But Del Vecchio says it’s facing steep odds at the box office this weekend — and tough horror competition from “The Invisible Man” is only one reason.

“It really comes down to bad timing,” he said. “The divisiveness is still going to exist; now they have to deal with people wanting to stay away from the theaters due to coronavirus.”

Debra Messing on White House call: I got Joe Biden elected, what’s the point to voting

Sharpton presses for visit with Brittney Griner in Russia

Brittney Griner to Biden: ‘I’m terrified I might be here forever’

Graham plans to challenge subpoena: ‘This is all politics’