A new book is helping readers see the light when it comes to one of “the least offensive” things that Congress does all day: prayer.

“When Rabbis Bless Congress: The Great American Story of Jewish Prayers on Capitol Hill” takes a look at the hundreds of guest chaplains who have opened the House and Senate in prayer since 1860.

“This book is very much an outgrowth of my watching Congress on TV for a living in working at C-SPAN,” says Mortman. “I’ve always been intrigued by the prayer that opens each session of Congress. It looks like nothing else that happens during the legislative day.”

Unlike some of the unholier moves by lawmakers on the chamber floors — where both mudslinging and gridlock can be commonplace — the prayer, Mortman says, offers a rare anodyne act on the Hill.

“There’s nothing controversial about it. Even if the chambers are empty, the messaging it seems like goes beyond the people in the chamber, and to the outside world, the TV audience, to America,” Mortman, 53, tells ITK. “The prayer precedes the Pledge of Allegiance, so really the first thing Congress does when they gavel in is pray.”

Six years ago, the idea came to Mortman to turn his fascination into a research project.

“I put on my propeller hat and geeked out. I just started researching, digging up every rabbi who’s ever given a prayer in Congress.” 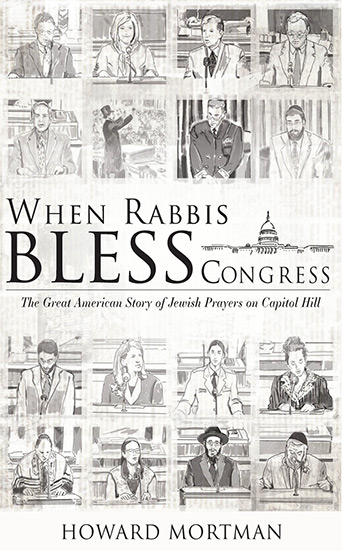 What he found was more than 440 rabbis — or “guest chaplains” as they’re often referred to, sponsored by lawmakers on both sides of the aisle — have opened Congress over the years with more than 630 prayers.

Mortman says his book, out this week and published in partnership with the Washington Hebrew Congregation, tells more than just a tale of congressional prayers.

“It’s a never-told story of Jewish history in America — and being able to be Jewish and pray in the center in the legislative branch, basically the center of democracy, is a milestone accomplishment in the Jewish experience.”

But the political junkie says the book can speak to a broader audience than a single religious group: “I am a Congress geek, so I wrote it in a way that it would appeal to non-Jews that are just enthusiasts for the history of Congress.”

“If you watch Congress all day long,” as he does, Mortman says, “it gets pretty raucous on the floor and acrimonious. And none of that exists when there’s a prayer. It’s like a safe space for the legislative day.”

Jon Stewart: Supreme Court is ‘the Fox News of justice’