A response to the Historically Black Colleges and Universities dashboard

As researchers committed to providing robust, data-driven analyses that Historically Black Colleges and Universities (HBCUs) can use to better serve their students, we appreciate the thoughtful use of well-contextualized data and rigorous evidence when considering these oft-maligned institutions. In September, the White House Initiative on HBCUs issued an “HBCU Dashboard” at its annual conference.  We have several concerns about the “Dashboard” and we outline them below.

Our first concern with the report is its reliance on IPEDS as its sole data source. There’s no question that IPEDS is a fount of information on HBCUs, but such data on their own, with no further context, fails to provide a useful understanding of these institutions. Although the authors of the “Dashboard” note that IPEDS is not a perfect measure and remind readers that “it is important to engage institutions directly to understand the deeper context of the data,” they nonetheless base the report exclusively on this imperfect data, with little rationale for their choices.

We also found a number of troubling inconsistencies in the use and interpretation of data, not to mention a few questionable assumptions, which we detail below.

The use of seemingly arbitrary analytical timeframes makes us wonder whether they were chosen randomly or for the startling findings they generate:

For instance, all institutions have seen at least two consecutive years with positive gains in enrollment. Though not all of them have been able to sustain these increased enrollments, of the institutions listed as the lowest-performing in the report, three of them (Talladega College, Le Moyne-Owen College and Miles College) have either maintained or increased total enrollment since 2003. 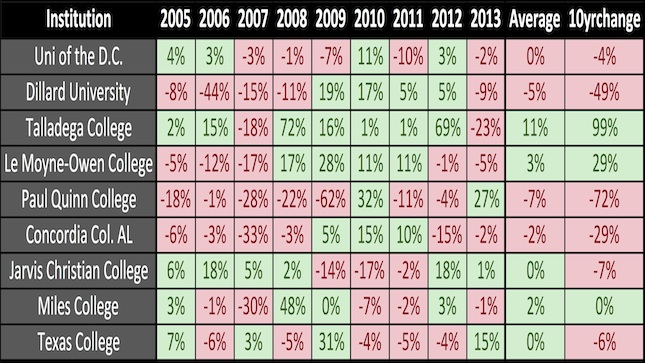 (The table above shows the percentage increase/decrease in total enrollment using the preceding academic year as a baseline for estimations. It then lists the average percentage change from 2004 to 2013 and the total change between 2003 and 2013.)

Some of the comparisons in the report are wholly misleading:

In several places, the authors fail to tease out critical details:

Given the influence of the White House Initiative on Historically Black Colleges and Universities and that of the U.S. Department of Education, we hope that the authors will reach out to all HBCUs and ask them for the most up-to-date data to include in this report. Making this effort would have given readers a more realistic and current view of the state of HBCUs than IPEDS can provide.

Although one could view the “HBCU Dashboard” as merely a reporting of IPEDS data, it is crucial to consider the power of influence that any report issued by a White House Initiative can have on the higher education community, funders and policymakers.

This piece has been updated from a previous version. The authors recently learned that the “Dashboard” is a working document despite being distributed at a national conference and lacking a statement noting the intermediate state of the document. We hope that our comments assist with future iterations of the “Dashboard” as it is improved for the good of HBCUs.

Gasman is professor of higher education at the University of Pennsylvania and director of the Penn Center for Minority Serving Institutions. Samayoa, Nguyen, Commodore and Boland are Ph.D. candidates and research assistants at the Center.