Public opinion on climate change: Is the glass half-full or half-empty for policymakers?

In all the discussion about the Environmental Protection Agency’s (EPA) new climate change rule and power plants, there has not been much thought given to the poll numbers. Since policymakers are presumably in office to represent the public, let’s take a look at the numbers from a variety of polls and see what they say.

First, provided below is a graphic that provides a long-term perspective on climate change from a number of polls. It indicates that the majority of Americans have believed, for an extended period of time, that global warming is happening. Of course, the naysayers might well look at this data and say, that at some points in time, according to the Gallup Poll, half do not believe global warming is happening. So is the glass half-full or half-empty when it comes to public support for EPA’s proposed power plant rule? 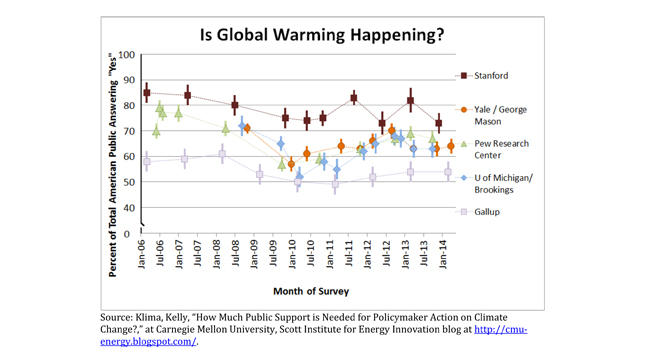 (Note: The vertical bars give the polling error indicated by the survey authors.)

Let’s now look at some of the focused polls that have been conducted in the past month. Here are some key quotes from the reporting of those polls (in date order):

My conclusions from this overview of poll data are the following:

So, what do you think? If you were a policymaker, is the glass half-full or half-empty when it comes to public opinion on mitigating greenhouse gas emissions?

Stine is associate director for policy outreach at the Scott Institute for Energy Innovation and professor of Practice, Engineering and Public Policy at Carnegie Mellon University.