Observations on the US-China climate announcement

The beginning of wisdom with respect to the U.S.-China joint announcement on climate change is straightforward: Even if implemented fully, it will have virtually no effect on global temperatures or attendant climate phenomena in this century, even as it would impose large economic costs on the world economy generally and that of the U.S. in particular.

The narrow specifics: The U.S. “intends to achieve an economy-wide” reduction in greenhouse gas emissions (GHG) of 26 to 28 percent below 2005 levels by 2025. (The current policy of the Obama administration is a reduction of 17 percent by 2020.) In contrast, “China intends to achieve the peaking” of GHG emissions “around 2030 … [and] to increase the share of non-fossil fuels in primary energy consumption to around 20 [percent] by 2030.”

{mosads}The U.S. reduction is more or less concrete, while the path of Chinese GHG emissions is wholly unclear, as emissions before the peak “around 2030” are undefined, the peak itself is undefined and the same is true for the trajectory after that year: Would Chinese emissions remain at the peak or decline? More centrally, that China now is planning around 50 coal gasification plants and about 360 coal-fired powerplants by 2030 does not bode well for any prospect of actual reductions in Chinese GHG emissions over, say, the first half of this century.

Quite to the contrary: The goals declared in this joint announcement, if embodied in an actual agreement, would provide China with powerful incentives to increase GHG emissions as much as possible before 2030, so as to make the “peak” constraint as nonbinding as possible. Moreover, the promised increase in the share of non-fossil fuels in Chinese primary energy consumption, ironically, will have the effect of increasing GHG emissions, perhaps counterintuitively, because as a modernizing economy China will strive mightily for an electric power system that is reliable. This means that the “non-fossil fuel” energy — which obviously means wind and other “renewables” — will have to be backed up by conventional power generation, so as to avoid the blackouts threatened by the unreliability of wind flows and sunlight. As engineering studies have shown, that kind of system is likely to result in an increase in conventional pollutants and GHG emissions, because the backup units have to be cycled up and down — that is, operated inefficiently.

But let us ignore that. Let us instead apply the MAGICC/SCENGEN climate model developed at the National Center for Atmospheric Research (NCAR) — used by both the Environmental Protection Agency (EPA) and Intergovernmental Panel on Climate Change (IPCC) — to the prospective reductions in GHG emissions. With respect to the new U.S. commitment — an additional GHG reduction of approximately 10 percent between 2020 and 2025 — the NCAR model predicts under standard assumptions that the additional temperature reduction by 2100 would be about one one-hundredth of a degree. (The standard deviation of the temperature record is about a tenth of a degree; accordingly, that effect is unlikely to be measurable.) The prospect of any actual reduction in Chinese emissions after 2030 — let alone between now and then — again is very poor, but let us assume for discussion purposes a 20 percent reduction by 2050. The temperature effect: about an additional two-tenths of a degree.

In sum, a rough but unbiased estimate of the prospective effect of an actual implementation of the announced U.S.-China GHG emissions goals would be slightly more than one-fifth of a degree. If we add to that the effect of the current policy of the Obama administration, we get another fifteen one-thousandths of a degree, for a total of less than a quarter of a degree.

The United States and China hope that by announcing these targets now, they can inject momentum into the global climate negotiations and inspire other countries to join in coming forward with ambitious actions as soon as possible.

As a general proposition, it is far less useful to base analysis upon what nations are “inspired” to do as distinct from the effects of their incentives. As the U.S. and China reduce (by assumption) their GHG emissions, thus increasing the economic costs of a vast array of productive activities — there really is no free lunch — others will be driven powerfully to take advantage of this shift in relative cost conditions by increasing their reliance on relatively cheap fossil fuels, thus improving their own competitive positions. This incentive will be reinforced by the trivial temperature effect of any GHG reductions that they implement: If we again apply the NCAR model to the prospect of, say, a 30 percent reduction in GHG emissions by the rest of the industrialized world by 2050, the additional temperature reduction by 2100 would be less than two-tenths of a degree.

Accordingly, the total effect of the hoped-for GHG emissions worldwide, under very generous assumptions, is less than one-half of a degree. The following table summarizes these predicted effects. 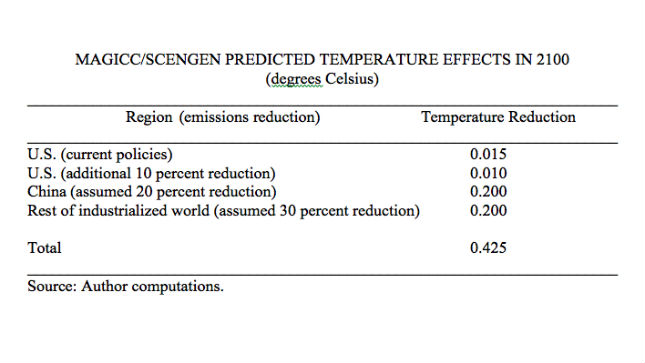 How much is that effect worth? The joint announcement does not tell us, but it does allow that “technological innovation is essential for reducing the cost of current mitigation technologies.” This is an implicit admission that the costs are significant, and is inconsistent with a previous assertion that “smart action on climate change now can drive innovation, strengthen economic growth and bring broad benefits.” Apart from the reality that resources consumed in an effort to reduce GHG emissions cannot be used elsewhere, what, precisely, are those benefits? The joint announcement claims, without referencing any actual evidence, that “accelerating” climate change is “caus[ing]” [such] “serious impacts [as] higher temperatures and extreme weather events,” resulting in “damag[ed] food production, rising sea levels and more damaging storms.”

Really? Let us review the evidence briefly. The number of undernourished people has been declining more or less monotonically since 1993, and world production and consumption of cereals, meat and dairy products have been increasing for years. There has been no temperature trend for well over a decade (or more, depending on how we adjust for the 1998 El Niño and other phenomena). This actual record has belied the predictions of the climate models.

The past two years have set a record for the fewest tornadoes ever in a similar period, and there has been no trend in the frequency of strong (F3 to F5) tornadoes in the United States since 1950. The number of wildfires is in a long-term decline. It has been almost nine years since a Category 3 or higher hurricane landed on a U.S. coast; that long a period devoid of an intense hurricane landfall has not been observed since 1900. The 2013 Atlantic hurricane season was the least active in 40 years, with zero major hurricanes. The 2014 season also has been quiet. There has been no trend in the frequency or intensity of tropical cyclones, and tropical cyclone energy is near its lowest level since reliable measurements began by satellite in the 1970s.

There is no long-term trend in sea-level increases correlated with increases in GHG concentrations. The record of changes in the size of the Arctic ice cover is far more ambiguous than often asserted, because the satellite measurements began at the outset of the warming period from roughly 1980 through 1998. Moreover, the 2014 Arctic ice cover does not differ from the 1981-2010 average by a statistically significant amount, and the 2014 Antarctic ice cover exceeds the 1981-2010 average by about two standard deviations. The Palmer Drought Severity Index shows no trend since 1895. Flooding in the United States over the last century has not been correlated with increases in GHG concentrations.

China as a rising power presents a number of national security challenges. The Chinese support for the Democratic People’s Republic of Korea (North Korea) despite the various depredations of the latter is deeply problematic. The overall Chinese military buildup — increased nuclear and ballistic missile capabilities, anti-satellite weaponry, the first blue-water naval force in six centuries — presents real problems for U.S. national security planning, and more generally seems to be engendering an arms race in Asia. Chinese aggressiveness in the South China Sea similarly is a problem, as are (reported) cyberattacks and espionage directed at the U.S. Etc.

And yet what is the issue central to the Obama administration’s view of China? Climate change! The willingness to elevate this above other issues, by accepting large costs for the U.S. not similarly to be confronted by China, suggests a fanaticism similar to that characterizing some religious movements. Logic and evidence are unlikely to prove effective as antidotes; only political accountability for the costs of such policies can serve that end.

Zycher is the John G. Searle scholar at the American Enterprise Institute.