Are we doing better today than on the first Earth Day?

Hard to believe it, but we’re now at the 45th anniversary of Earth Day. The question is: Are we doing better today than on the first Earth Day 45 years ago? This is particularly important as, according to The Hill, the House begins working on an energy bill this week. The Senate is busy as well, holding hearings next week on the administration’s Quadrennial Energy Review and several proposed energy efficiency bills.

{mosads}When Earth Day is discussed, speeches and articles often focus on pollution and natural resources without recognizing that producing and using energy is a major source leading to that impact. For example, the president has focused his remarks this week on the impact of climate change on national parks like the Everglades and the economic activity associated with these special landscapes. Behind that impact, however, is the daily production and use of energy that provides the essential elements of our lifestyle.

This month, the Energy Information Administration (EIA), the primary source of reliable statistical information on energy activities in the United States, released its Annual Energy Outlook 2015 providing both the current state of affairs as well as projections into the future. Predicting the future is challenging and depends on technical innovation, economic growth and other actions, but this annual snapshot provides a good overview of how we are doing. So, based on this report, how are we doing?

Overall, as shown in the figure below, this leads to a reduction in “energy intensity” — how much energy is used by each person and per dollar of gross domestic product in the United States — as well as in a reduction in the related emissions from that energy intensity. Looking toward 2040, the EIA expects energy consumption for space heating, lighting and computers to substantially decline, as well our use of gasoline for transportation, while our use of renewable energy and natural gas will increase, leading to a decline in carbon intensity (carbon dioxide emissions per unit of gross domestic product) of 2.3 percent per year from 2013 to 2040. In addition, for those concerned about energy security, the EIA expects that, due to increased oil and dry natural gas production, the United States will end its importation of energy. 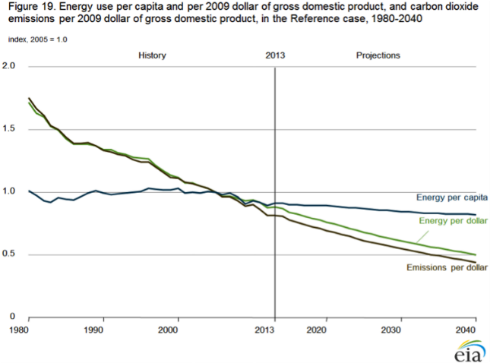 Does this mean that enough progress is being made that no further action is necessary? No. From an emissions standpoint, here are the challenges we still face:

So, are we doing better today than on the first Earth Day 45 years ago? Yes. Might it take another 45 years to achieve our Earth Day goals related to energy? The answer to that question is “yes,” as well.

Interested in knowing more about energy issues? This contribution to The Hill was based on the first episode of a new 90-second radio program called “Energy Bite.” This program, answering the public’s questions about energy technology related issues from Carnegie Mellon University’s Scott Institute for Energy Innovation and 90.5 WESA, Pittsburgh’s National Public Radio station, is available at no cost nationally via the Public Radio Exchange. At the program’s website, you can hear the answer to the question addressed in this contribution from Granger Morgan of Carnegie Mellon, one of the nation’s leading scholars on energy technology and policy. And you can answer the program’s poll question: How much more would you be willing to pay to have all your electricity made without releasing carbon dioxide to the atmosphere? What is your answer? No more than you’re paying now? Or $1 per month, $5 per month, $20 per month or $100 per month? It’s certainly an issue facing today’s society — locally, nationally and globally.

Stine is associate director for policy outreach at the Scott Institute for Energy Innovation and professor of the Practice, Engineering and Public Policy at Carnegie Mellon University.