Which coal-fired plants can use carbon capture to meet EPA goals?

As reported in The Hill, the Environmental Protection Agency (EPA) is entering the final stages of approval for its Clean Power Plan. On June 5, 2015, the Energy Information Administration (EIA) provided their projection of how the nation’s power plant mix will change due to the Clean Power 111(d) Plan. Might carbon dioxide capture, utilization and storage (CCUS) be an option for some of these plants? 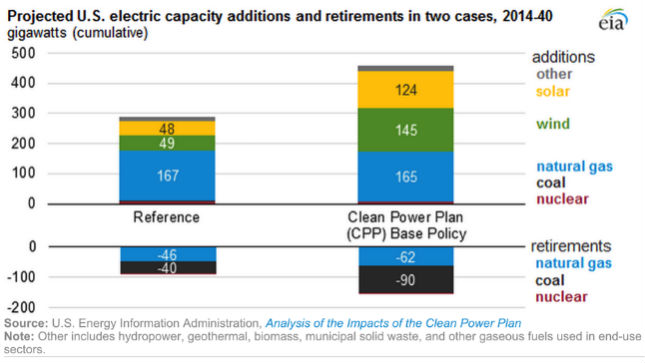 The answer, according to a study from Carnegie Mellon University Scott Institute for Energy Innovation researchers Haibo Zhai, Yang Ou and Edward S. Rubin, is “yes.” Their study, published in the prestigious journal Environmental Science & Technology, found that CCUS is a viable technical and economic option for some coal plants, which would allow them to remain in operation under the emission limits of the Clean Power Plan. Because of the way the plan is designed, however, CCUS is not a mitigation “building block” for coal-fired plants since, while recognizing the potential viability of partial CCS at some plants, the EPA concluded that it was neither technically or economically feasible due to concerns about space limitations and high cost. In partial CCUS, some, as opposed to all, of the carbon dioxide emissions are captured.

{mosads}The Carnegie Mellon research analysis shows that this is not a correct conclusion in some situations. Using EPA data in a Carnegie-developed power plant modeling tool, the researchers identified 60 gigawatts of existing U.S. coal-fired electric generating units, known as EGUs, where unit-level emission rates could be reduced by 30 percent through the use of partial CCUS without significant increases in the cost of electricity generation. They found that CCUS is not feasible for the remaining coal-fired power plants, approximately 190 gigawatts, which may or may not include some of the plants expected or projected to retire.

According to the study, the key unit characteristics where CCUS is likely to be economically feasible for existing coal-fired plants when compared to natural gas combined cycle (NGCC) plants, depending on fuel prices, are when units are “fully or substantially amortized, relatively efficient, have net capacities of more than 300 MW [megawatts] with high utilization, and can operate for 20 years or more.” Retrofitting existing plants with CCUS is not economically feasible when units are “only slightly or modestly amortized, or much older, with lower efficiencies and smaller capacities needing extensive upgrades.”

Other technical actions that can be taken to reduce costs are the use of auxiliary gas-fired power systems to reduce energy costs and serving several EGUs with a large CCUS system.

Another policy options to enhance economic feasibility of CCUS in coal-fired plants is a carbon dioxide emission trading system, possibly in combination with an Enhanced Oil Recovery (EOR) market. This would increase the likelihood and speed of power plants deploying CCUS and lower electricity generation cost while reaching the carbon dioxide emission reduction goals of the Clean Power Plan.

Because this analysis is a model, it is important to understand that costs will vary from one plant to another, so a site-specific analysis should be conducted before a final decision is made to retrofit a plant with CCUS. The issue of space and water availability for CCUS operations is also site-specific and not considered in this analysis. Finally, power plants do not operate independently of one another, so the specific context as to how a plant fits into the grid in that region is yet another site-specific factor that should be taken into consideration.

The EPA indicated in their proposal that they would consider use of CCUS. Based on this analysis, partial CCUS is an option that states and operators can consider for approximately 25 percent of coal-fired power plants in the United States. Doing so may result in a change in the power plant mix projected in the EIA analysis above.

Stine is associate director for policy outreach at the Scott Institute for Energy Innovation and professor of the practice, Engineering and Public Policy at Carnegie Mellon University. Zhai is assistant research professor of engineering and public policy and project manager of Integrated Environmental Control Model (IECM) Development.

These companies will cover abortion travel costs for employees