For poverty solutions, looking beyond Congress

Tomorrow, Rep. Paul Ryan (R-Wis.) will host another hearing on the U.S. War on Poverty. It is unlikely to generate any meaningful solutions to the economic insecurity of America’s low-income families. But Ryan’s is not the only conversation on poverty taking place tomorrow. Just a few blocks from the capital, academics, activists and policymakers will gather for Inequality Begins at Birth: Child Poverty in America, where they will discuss the causes and conditions of poverty and highlight tried solutions for sustainably reducing the U.S. poverty rate.

Today, 46.5 million people in the United States live in poverty, more than a third of them children. The U.S. child poverty rate, at 22 percent, is the highest of any rich country. The seemingly incurable inertia with which Congress regards poverty makes it seem like a creeping and intractable problem to which there is no solution.

Participants at the Inequality Begins at Birth conference — co-hosted by the Roosevelt Institute, the Century Foundation and the Academic Pediatric Association (APA) — will discuss the complex drivers and outcomes of poverty: the impact of toxic stress on young children; the challenges facing single and working mothers; the need for paid sick and family leave policies; and the importance of safety net programs for poor children. A number of panelists will speak about their own experiences with poverty — a perspective the Ryan hearings have woefully neglected.

Tomorrow’s conference will reflect on the critical links between low-wage work and child poverty. “It is impossible to talk about child poverty without talking about low-wage work,” said Dr. David Keller, immediate past president of APA and conference speaker. After all, single mothers represent nearly 60 percent of minimum-wage workers and account for 75 percent of all workers in the 10 lowest-paid occupations.

Conservatives like to lay blame for continued cycles of poverty on single mothers, who they accuse of draining state and federal coffers by mooching off the social safety net. But 30 percent of poor children live in households with at least one parent who works full-time year-round. These jobs, however, offer tenuous security, as full-time work at the minimum wage fails to put a family of three above the federal poverty line. Further, without paid family leave, a few days of missed work to care for a sick child can push a woman off the payrolls. In single parent homes, the parent is often forced to choose between an unreliable job and caring for a child.

Research from other countries shows us that being born into or living in a single-parent household is not a predetermined road to poverty. Scandinavian countries with more generous safety-net programs and similar rates of single parenthood have child poverty rates as low as 3 percent. If single moms in Finland, Norway and Sweden were supported by the same safety net available in the U.S., their child poverty rates would rise by roughly 20 percent. 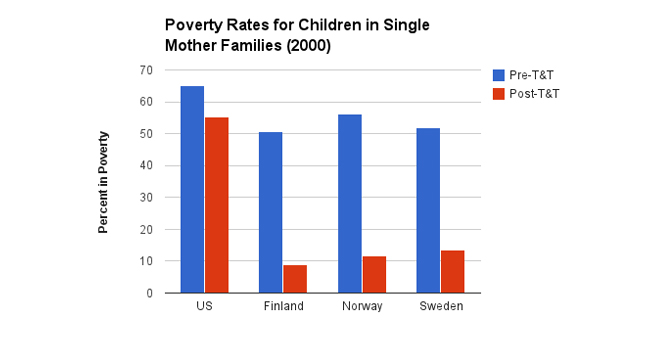 Advocates and policymakers have long argued that strengthening — not tearing down — the safety net is critical to improving the U.S. poverty crisis. There is now ample evidence to prove it. Tomorrow’s conference participants will highlight solutions that have been piloted at the state and local level and are showing promise.

These are just some of the solutions before us. You probably won’t hear about any of them at Ryan’s hearing tomorrow. But the individuals and advocates who know firsthand what is needed to combat our nation’s poverty crisis will not be deterred by congressional roadblocks. It’s time to follow their lead.

Inequality Begins at Birth will be livestreamed. For more information about the conference, click here.