FBI Director James Comey is unpopular across the political spectrum, according to a new poll that finds voters have a negative opinion of Comey by a more than two-to-one margin.

According to data from a Harvard-Harris Poll survey of registered voters provided exclusively to The Hill, only 17 percent have a favorable view of Comey, compared to 35 percent who have a negative view of him.

Forty-one percent of Democrats have an unfavorable view of Comey, with only 12 percent saying they view him positively.

That could change for the worse, as the Harvard-Harris Poll survey was conducted prior Comey’s testimony on Monday before the House Intelligence Committee that frustrated many Republicans. Chairman Devin Nunes (R-Calif.) lamented that Comey had cast “a big, gray cloud” over the Trump administration. 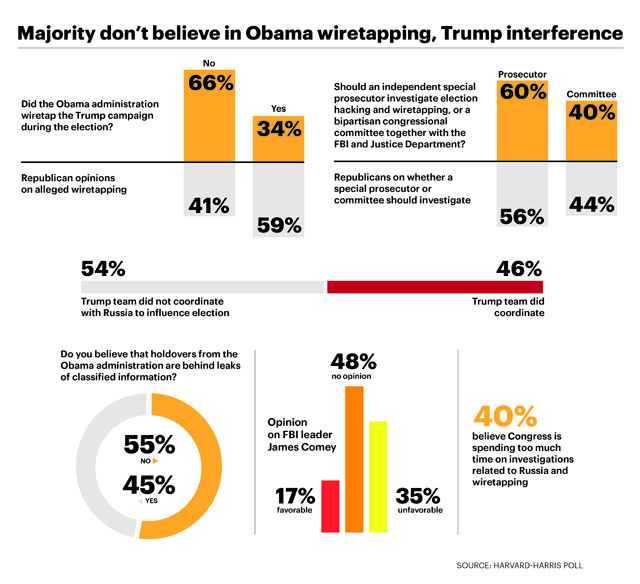 Among independents, Comey has an overall negative rating, with 17 percent holding a positive view compared to 36 percent with a negative view of the FBI director.

“Even in 1953, the height of McCarthyism, Gallup had 78 percent saying J. Edgar Hoover, Jr. was doing a good job and only 2 percent a poor job,” said Harvard-Harris Poll co-director Mark Penn. “Comey’s ratings, which are two-to-one negative, suggest a crisis of confidence in his leadership as top law enforcement officer.”

On Monday, Comey swatted down President Trump’s assertion, presented without evidence, that former President Obama had him wiretapped during the 2016 presidential race. Comey also revealed that the FBI is investigating potential links between members of the Trump campaign and Russia, following reports that Moscow-backed hackers attempted to influence the election in Trump’s favor.

Democrats have seized on the investigation as a way to slow the GOP agenda in Congress. Republicans are furious that Comey wouldn’t confirm whether the FBI is investigating leaks of classified intelligence information, like those that led to the ouster of Trump’s national security adviser, Michael Flynn.

Comey’s bruising testimony agitated Republicans, but it was payback for many Democrats who blame Comey for Hillary Clinton’s election loss.

About a week before Election Day, Comey announced that the FBI had discovered emails potentially relevant to the Clinton investigation, only to say a few days later that the investigation had been completed.

The FBI director did not give any further details about who in the Trump campaign was under investigation or how long the investigation might take.

A majority of registered voters — 60 percent — say in the poll that they’d like to see an independent special prosecutor investigate Russian meddling in the election and Trump’s wiretapping claims. Only 40 percent are content with the matter being handled only by bipartisan congressional committees, the FBI and the Justice Department.

The proposed independent investigative board, which proponents have likened to the 9/11 Commission, has majority support among Republicans, Democrats and independents in the poll. It is unlikely to happen anytime soon, though, as the Republican-controlled Congress would have to create the commission in legislation that Trump would then have to sign into law.

The Harvard-Harris Poll survey found that 54 percent of voters don’t think members of the Trump team illicitly colluded with the Russians over the campaign.

Much of the early focus surrounding Russian meddling has been on White House officials that met with Russian Ambassador Sergey Kislyak during the campaign.

Flynn, the former national security adviser, resigned for misleading Vice President Pence and other senior White House officlas about the contents of a phone conversation he had with Kislyak. And Attorney General Jeff Sessions recused himself from all Russia-related investigations after it was reported that — contrary to his congressional testimony — he had met with Kislyak during the presidential race.

Sessions, a former Republican senator from Alabama, has said the meetings came in his role at the time as a member of the Senate Armed Services Committee and not as a surrogate for Trump’s campaign.

A majority of voters — 60 percent — say that they believe the meetings with Kislyak were part of normal contact with a foreign government, compared to 40 percent who said the meetings were arranged to collude over the campaign.

On the issue of Trump’s insistence that Obama wiretapped Trump Tower — a claim that has been rejected by Comey, as well as many GOP leaders in Congress — 66 percent of voters say that they don’t believe the former president spied on the current president.

“They neither believe that Obama wiretapped Trump, nor that Trump coordinated with the Russians — a majority does not agree with either position,” said Penn.

Still, those questions break sharply along partisan lines, with 59 percent of Republicans saying they believe Trump’s wiretapping claims and 83 percent of Democrats saying the Trump campaign colluded with the Russians.

The White House has been on edge over what it describes as nefarious “deep state” actors — lifelong bureaucrats and holdovers from the Obama administration — leaking classified information about Trump and his inner circle to the media in an attempt to damage the new administration.

Many Republicans believe that’s how a transcript of a conversation Flynn had with Russian officials found its way to the media, ending with him being fired.

A plurality of voters — 40 percent — say Congress is spending too much time on Russia and Trump’s wiretapping claims.