Share Tweet
More
Share
Twitter
Facebook
LinkedIn
Whatsapp
Email
Fewer than half of Americans are white Christians, a precipitous decline fueled by rising ethnic diversity and a new generation far less likely to affiliate with any religious group, a new landmark survey finds.
As recently as 1976, more than eight in 10 Americans were white and Christian, and a majority of the country consisted of white Protestants. Today, only 43 percent of Americans are white and Christian, and just 30 percent are white Protestants.
{mosads}Appalachian and Midwestern states are much more dominated by white Christians than Sun Belt and West Coast states. More than 60 percent of residents of North Dakota, South Dakota, Iowa, Kentucky and West Virginia are white Christians.
In California and Hawaii, fewer than a quarter of residents are white Christians. That group makes up less than 40 percent of residents of Nevada, Arizona, New Mexico, Colorado, Texas and Florida. New York, Maryland and New Jersey are all less than 40 percent white and Christian.
The poll of more than 101,000 Americans, conducted by the Public Religion Research Institute, found white Christians have an older median age than those who adhere to other religious faiths, meaning the decline is likely to continue in coming years. 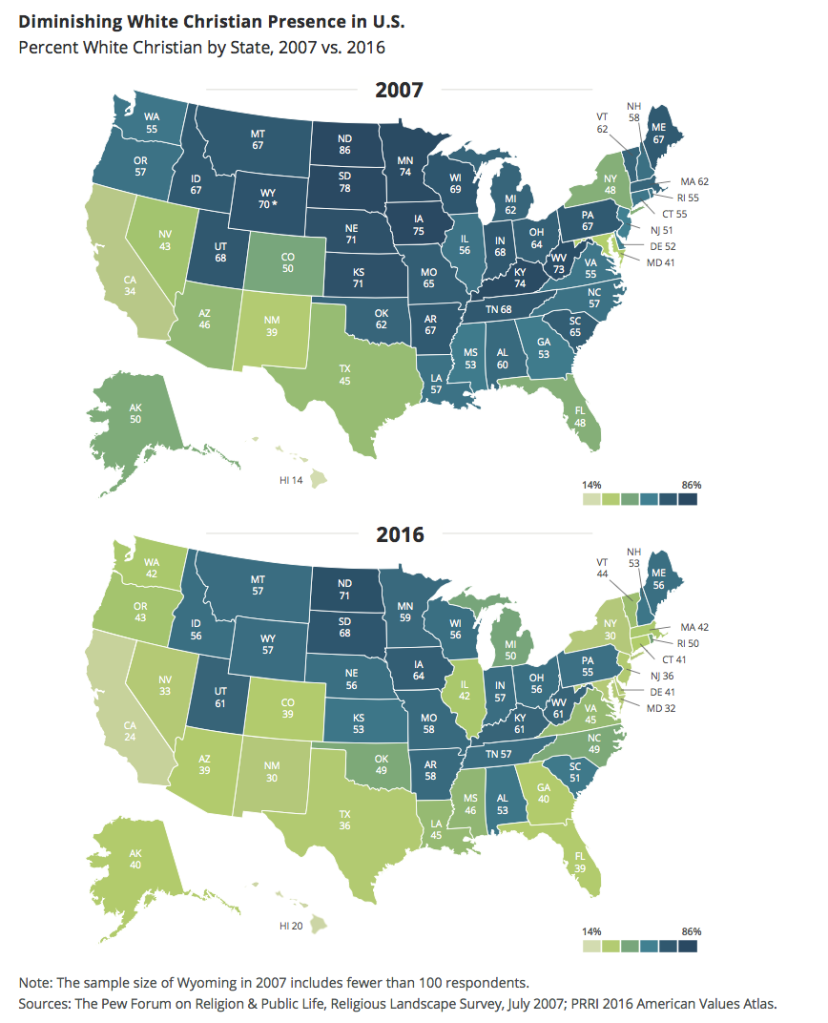 About 60 percent of white Catholics and Protestants are over the age of 50. The only Christian denomination in which most adherents are younger is Mormonism.
Muslim, Hindu and Buddhist Americans are on average far younger than their Christian counterparts. And the millennial generation is much more likely to identify as unaffiliated with any religious group than any previous generation: More than one third of those between the ages of 18 and 29 say they do not belong to a specific religion.
Older generations are much less religiously diverse. Among those over 65 years old, almost two thirds are white Christians. Among millennials, just under a quarter are white Christians.
Americans’ shifting religious affiliations have dramatically changed the face of one of the nation’s two largest political parties. Just 29 percent of self-identified Democrats say they are white Christians, down from half of all Democrats a decade ago.
The Republican Party remains dominated by white Christians: Just under three quarters of self-identified Republicans are white Christians, and more than a third, 35 percent, call themselves evangelical Protestants.
Almost half of white evangelical Protestants identify as Republicans. Nearly half, 44 percent, of Mormons are Republicans. Younger Christians tend to align more with the Republican Party, while older Christians, which still lean to the right, are nonetheless more likely to favor Democrats.
Religious preferences vary widely between ethnic groups, as well. Two-thirds of black Americans identify as Protestants, while nearly half, 48 percent, of Hispanics are Catholic. About one in five blacks and Hispanics are religiously unaffiliated, the report found.
Among Asian and Pacific Islander Americans, religious practices are much more diverse. About the same number call themselves Hindu as Protestant or Catholic, and a substantial number also identify as Muslim and Buddhist. A third of all Asian Pacific Islanders are unaffiliated with a religion.
Around the world, much of the growth within the Catholic Church has taken place in Africa and Latin America. In the United States, the Catholic population is becoming increasingly diverse. A quarter century ago, 87 percent of American Catholics were white. Today, a third are Hispanic, and just 55 percent are white.
Catholicism increased in America as Italian and Irish immigrants landed in states along the Northeastern seaboard. Even today, those states — Rhode Island, Massachusetts, Connecticut and New York — are the most heavily Catholic states in the union. But a majority of American Catholics now live in Southern and Western states, while only a quarter live in the Northeast.
The number of Americans who identify as religiously unaffiliated has grown sharply since PRRI began testing American religious views 40 years ago. Then, just 7 percent of Americans said they were religiously unaffiliated; today, 24 percent of Americans decline to identify with any particular religion.
Twice as many unaffiliated Americans say their politics are liberal, 43 percent, than those who say they are conservative, 21 percent.
Unaffiliated voters make up a plurality of the population in 20 states. Nine of those states — Alaska, Montana, Idaho, Wyoming, Nebraska, Arizona, Michigan, Kansas and Florida — voted for President Trump last year. All thirteen states in which white evangelical Protestants make up the largest religious group favored Trump in 2016.
Just three of the eleven states in which Catholics make up the largest bloc — Louisiana, Pennsylvania and Texas — voted Republican in last year’s election.
Men are more likely to identify as unaffiliated, or as members of the Hindu or Muslim faiths. Women are more likely to identify as Jewish or virtually every denomination of Christian than are men. 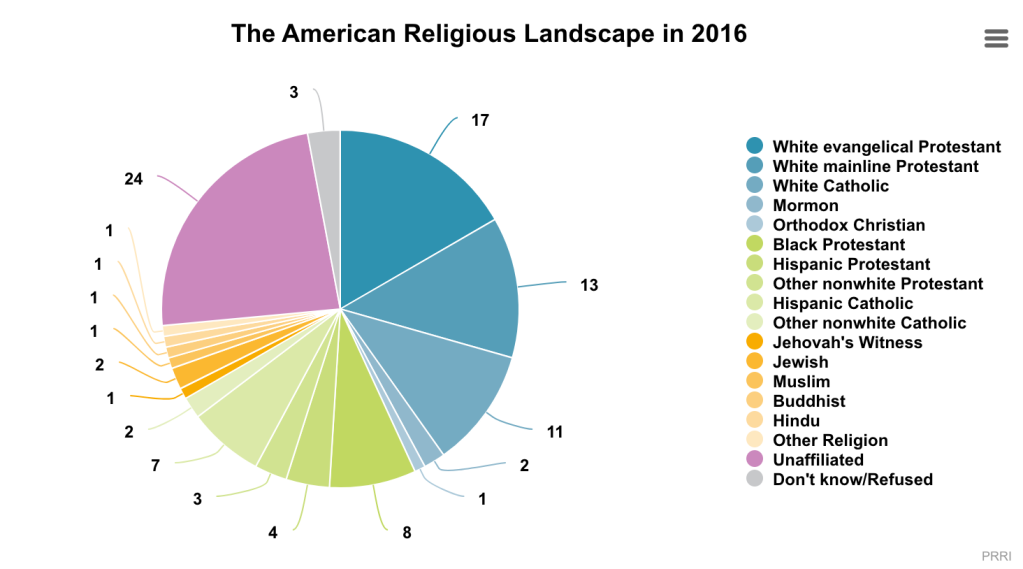 by Brett Samuels 1 day ago
Administration  /  1 day ago
Campaign