Employee satisfaction across the government improved by an average of 2.1 points in 2017 in the months after President Trump took office, compared to the same time last year, according to a new survey of federal workers.

Federal government agencies, large and small, reported an average score of 61.5 points in employee engagement on the 100-point scale, an increase from 2016, according to data compiled by the Office of Personnel Management (OPM).

“The three-year increase in employee engagement follows a concerted effort by agencies across government to improve how employees view their leaders and their jobs. Building on this momentum will require a strong commitment from the Trump administration to continue improving the employee experience — from training and developing leaders to ensuring employees have a positive work environment and the resources they need,” said the analysis of OPM data by the nonprofit Partnership for Public Service and the audit and consulting firm Deloitte, the groups which conducted the survey.

{mosads}Still, the jump was not uniform across the government, as workers at the FBI, State Department and the White House’s Office of Management and Budget (OMB), among others, reported being less happy at their jobs than they were the year before.

Overall, 22 of the 200 agencies surveyed had a drop of 2 or more points in their overall satisfaction and employee engagement.

The top-line numbers of the survey, which rank the best places to work in the federal government, take 10 categories into consideration — including pay, views of senior leaders and their effectiveness, teamwork, work-life balance, innovation, and support for diversity, among others. Support for diversity was the category with the greatest improvement across government agencies.

“It’s important to recognize the positive story here, the overall engagement numbers went up, and they went up in a big way: 2.1 percent is a big increase for an entity this size, the whole government,” Max Stier, the president and chief executive of the Partnership for Public Service, told The Hill. “This is a red warning light for an agency heading in the wrong direction.”

“They’re heading in the wrong direction when everyone else is going right. Where are things that are going up a lot, and what can we learn from them? Where are they going down?”

The survey was conducted in the early months of the Trump administration, between April and June. The rankings are split among large agencies, which have 15,000 or more employees; mid-size agencies, with at least 1,000 workers; and small agencies. 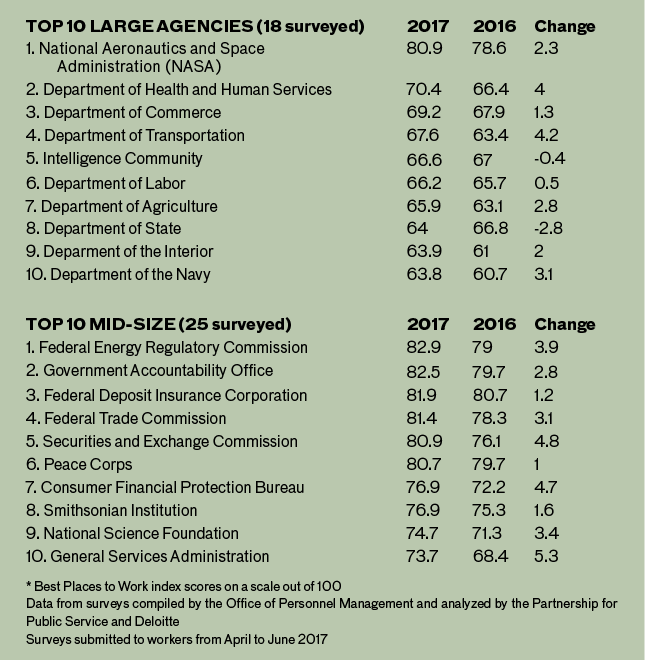 Unlike previous years, the OPM had only provided data for agencies with more than 300 employees, rather than those with 50 or more employees. Under the new criteria, there are only seven small agencies and 150 agency subcomponents. However, it later reversed the decision, and the Partnership for Public Service will analyze those numbers next year.

The point of the survey, Stier said, is to provide transparency to agency heads and show them areas in which they can improve.

Of 18 large government agencies, NASA employees ranked their engagement the highest, with an overall score of 80.9. The Department of Homeland Security (DHS) ranked last, with 52 points. However, DHS was the most improved among the large agencies, boosting its score by 6.2 points.

The State Department, which ranked No. 8 among the large agencies in employee satisfaction, dropped its overall score 2.8 points to a score of 64. The Justice Department, No. 11, dropped 2 points to 63.7.

State Department employees’ view of senior leadership dropped 9.2 points, the report says, putting it in the bottom half of the responses to those specific questions. The views on the effectiveness of leadership dropped 2.1 points.

Secretary of State Rex Tillerson, the former chief executive of oil giant Exxon Mobil Corp., has taken heat for his management style. Critics say he has been sequestering decisions to a small inner circle of advisers even as he proposes to make cuts to the department’s budget and push out nearly 2,000 diplomats and civil servants.

The State Department’s scores did improve in the areas of teamwork, the matchup of employee skill sets to the mission of the agency, teamwork between workers, commitment to diversity and rewarding employees for coming up with innovative solutions. Other scores, like pay and employee training and development, decreased slightly.

In the private sector, the average employee engagement score for employees this year is 77.8 out of 100, according to data provided by employee research firm Mercer | Sirota.

The highest-ranked mid-size government agency was the Federal Energy Regulatory Commission, which scored 82.9 points, a 3.9-point increase over the previous year.

The Securities and Exchange Commission, Consumer Financial Protection Bureau, U.S. Agency for International Development (USAID), Small Business Administration (SBA) and General Services Administration each boosted its scores by at least 4 points, with USAID jumping 6.8 points and SBA — which still ranked second to last, at No. 24 — improved by an overall 7.3 points.

The score for employees at the Broadcasting Board of Governors, No. 25, averaged the lowest score among mid-sized agencies — at 50.8 — though the number increased 2.8 points over last year.

The Environmental Protection Agency (EPA) ranked No. 18 in terms of mid-size agency employee satisfaction, with its score dropping almost 1 point. The satisfaction of employees at some of the regional and sub-offices remained mixed, with some dropping dramatically and others increasing as much as 2.9 points. The Office of Air and Radiation at EPA ranked 113 out of the 150 sub-components surveyed, dropping 7.3 points.

The largest decrease among mid-size agencies, though, came from the National Credit Union Administration. Its overall score was 69, a 2.9-point slump.

The Overseas Private Investment Corporation ranked No. 1 among employees at small agencies surveyed, with 79.9 points, but decreased its overall score by 4.9 points.

The OMB, which is responsible for coming up with the administration’s federal budget proposal and reviewing regulations, saw its employee engagement drop by 7.3 points to 75.4 but maintained its spot at No. 2.

The Millennium Challenge Corporation, an independent bilateral foreign aid agency, improved its scores the most, increasing by 13.8 points to 73.8. The Commodity Futures Trading Commission ranked last in the bunch, with a score of 58.6 points.

There were 150 components within agencies surveyed by the OPM, and the Office of Inspector General for the Tennessee Valley Authority, a federally owned corporation, scored at the top, with 92.1. The Secret Service, part of DHS, ranked at the bottom, with an overall score of 33 out of 100.

Employees at the FBI reported a 2.1-point decrease. President Trump fired former FBI Director James Comey on May 9, a date that occurred during the survey process.

The Justice Department’s Environment and Natural Resources Division, Federal Bureau of Prisons, and the EPA’s Office of Enforcement and Compliance Assurance and Office of Water each saw scores drop more than 5 points.

The largest increase occurred within Immigration and Customs Enforcement (ICE), also under the DHS umbrella, which saw employee engagement increase by 11.5 points. The agency has attracted criticism for how aggressive it has been in immigration enforcement.