Corporations are considering sitting out the Democratic National Convention this summer for fear of looking partisan if they decide to skip the GOP’s event because of Donald Trump.

Major companies that have budgeted money for the quadrennial events are sitting on their cash and weighing their options, with just over three months to go until the Republican convention in Cleveland and the Democratic one in Philadelphia.

{mosads}“Corporations don’t want their name or brand near Trump, and if they don’t participate in Cleveland, that means they can’t play ball at the Democratic convention. They have to do both or nothing,” said a person planning events at both conventions.

“People who have typically been a part in a big way are just saying no,” the person added. “They’re sitting this one out.”

Businesses have long kept a big presence at the nominating events, cutting checks for the festivities and sponsoring branded parties where their executives hobnob with the biggest names in the political world.

But raising money for this year’s conventions is proving difficult, with many corporations wary of associating themselves with Trump — the front-runner for the GOP nomination — and his controversial campaign for the White House.

“It’s my sense that companies were already dialing down their convention expenditures for both parties, and Trump is a convenient excuse,” said Michael Hacker, a partner at consulting firm HDMK, who has advised clients on political convention planning. “That being said, the chaos in Cleveland is not making it easier to convince companies to commit resources in Philly.”

While Trump is affecting the GOP’s fundraising, Democrats are feeling the pinch as well, with many corporate donors fearing a backlash if they give to one party but not the other.

“As I’m reaching out for people to support what we’re doing, there are a lot of people who say they haven’t made up their minds yet,” said a lobbyist at a trade association, though he added that a “standard core” of companies have already pledged to be involved.

The Hill spoke with roughly a dozen consultants, lobbyists, fundraisers and corporate officials involved in planning for the conventions for this story. None was able to speak on the record because of the sensitivity surrounding the issue and because they are still working on deals related to the events.

The insiders contacted by The Hill said intense discussions about corporate sponsorships for the conventions are well underway, though many remain reluctant to make commitments.

Some companies have suggested they would like to sponsor events at the conventions but keep their corporate branding out of it, many of the sources said.

Another factor playing into the lack of involvement is the ban on corporate donations imposed by Democrats during the last two presidential election cycles.

During the 2008 campaign, Barack Obama pledged that the party committee and convention accounts would not take money from political action committees run by companies, trade associations or unions. The policy was kept in place during his reelection bid in 2012.

Last year, the Democratic National Committee (DNC) said it would begin taking money from corporate and union PACs again. But companies have not been rushing to give, several people said.

“I think there was a little bit of, ‘We have taken that out of our budget … these packages are pricey … did we miss anything by not going?’ ” the consultant said.

Another lobbyist added, “The days of all these huge amounts of money at conventions, like back in the Clinton-Kerry era, are gone.”

The reluctance about donating is putting the planners both inside and outside the national party committees in a bind.

While nonprofit host committees in Cleveland and Philadelphia are bearing many of the basic convention costs — including things like the venue, security and electrical wiring — the two parties must pay the rest.

The weeklong events are enormously expensive. In 2012, the Democratic National Convention in Charlotte, N.C., cost $66 million, which included a $10 million loan from Duke Energy, whose CEO sat on the host committee. The company ultimately wrote off the loan. Republicans spent $74 million on their 2012 convention in Tampa, Fla.

The need for corporate cash is even more acute this year, after Congress passed a law in 2014 that diverted taxpayer money for the conventions to pediatric medical research, blowing an $18 million hole in the convention funding of each party.

The host committee for Philadelphia says its fundraising efforts are progressing.

“We are not specifying our fundraising numbers to date; however, we feel very good about our progress and are hitting all of our benchmarks,” said Anna Adams-Sarthou, spokeswoman for the Philadelphia Host Committee, adding that it would not disclose specifics about contributions.

The Cleveland Host Committee ­released a similar statement, saying it had reached 85 percent of its $64 million fundraising goal.

The Democratic National Committee, meanwhile, had $3.15 million in its convention account through February. Political action committee donations to the account are capped at $45,000 per PAC per year.

A similar account run by the Republican National Committee (RNC) has about $10.7 million in it, according to federal records.

Aside from the official party events, the conventions typically feature a slew of parties, panels and concerts that give guests additional face time with party bigwigs and companies another branding opportunity. In the past, the parties have featured acts such as the Foo Fighters, Kid Rock and the rapper Common.

Although some people involved in planning for the convention are anxious about how much money will come in, most expect that Democrats will ultimately reach the fundraising levels they need.

“I think the money will be there, but it won’t be as robust,” the Democratic consultant said. “We’re still going to have a fine convention, but are you going to have as many parties with Pitbull? Maybe you have one or two less concerts with Pitbull.”

Several people who are trying to organize events around the conventions said corporate sponsors have been slower to make decisions this year.

“You have leverage sitting on the sideline, waiting to make a decision, because the DNC and the RNC have not hit their fundraising goals,” said a fundraiser who is doing events in Philadelphia. “If you’re a big company, you can still come in later and drop a pot of money and get what you want because they haven’t reached their benchmarks yet.”

Trepidation about the conventions cuts across industries, according to corporate lobbyists.

“It’s really universal,” said a Democratic lobbyist with dozens of blue-chip clients. “Of all my clients, there is only one seriously asking me for a plan for the conventions.”

“A lot of people just don’t find that it’s worth it,” the lobbyist said. “What do you even get for it anymore?” 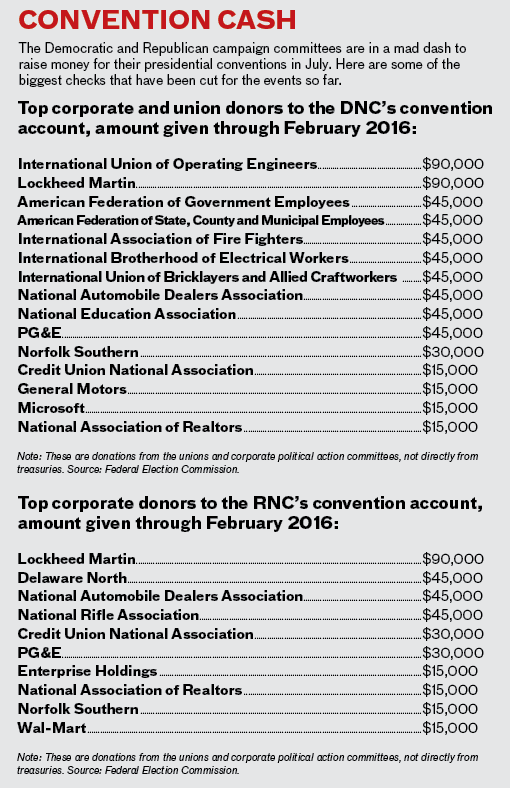