That total represents almost a quarter of the $3.34 billion that was spent overall on lobbying and a modest increase over the amount the top 50 organizations spent in 2016.

Groups representing big business — the U.S. Chamber of Commerce and the Business Roundtable — finished in the top three for 2017, while large tech companies continued to climb in the rankings, according to figures provided to The Hill by the Center for Responsive Politics.

{mosads}Google last year surpassed Boeing and AT&T to become the top corporate spender on lobbying efforts in Washington. The internet giant spent more than $18 million, an 18 percent increase over 2016.

Facebook’s spending increased by 32 percent, while Amazon’s jumped by 14 percent.

The growing dominance of Silicon Valley in the lobbying sphere is a shift from the early years of the Obama administration, when defense contractors, energy and health-care companies, and industry groups were the biggest spenders. Google, despite having lobbyists since 2003, didn’t break into the top 20 spenders until 2012.

That said, health-care groups remained steady in the higher echelon of spenders on advocacy last year, with the Pharmaceutical Research and Manufacturers of America (PhRMA), Blue Cross Blue Shield, the American Hospital Association and the American Medical Association all making the top 10.

“This is just the tip of the iceberg,” said James Thurber, a professor at American University who studies government and lobbying. “We’ve got shadow lobbying going on, we’ve got dark money, things that don’t get recorded. There’s lot of gambling going on in this city, like in ‘Casablanca.’ ”

To be sure, the lobbying figures do not provide a complete picture of the money that is spent influencing Washington. The figures only include the work of registered lobbyists who cross certain thresholds, such as spending 20 percent or more of their time making lobbying contacts on behalf of a client. That bar has been easy for influencers to bypass.

Yet the figures provide the fullest picture available of the lobbying cash that flows into Washington.

Last year proved to be a busy year for corporations, as big priorities such as deregulation and tax reform progressed in the first year of a Republican-controlled government.

“This is the first two years of a new administration. For most administrations, that’s like the legislative happy spot,” said David French, the senior vice president of government relations at the National Retail Federation. “That’s the only time they get things done.”

The National Retail Federation’s lobbying spending increased by 81 percent over 2016, rising to nearly $13 million. The trade association achieved a big victory when it killed a provision in tax reform that would have taxed imports at a higher rate, known as a border adjustment tax (BAT).

“Last year was a perfect storm for us. We had three major campaigns going on at once, between the BAT campaign, swipe fee reform and moving on to tax reform,” French said. “Our spending ticked up a lot as a result.”

The last time lobbying spending increased from year to year was during President Obama’s first two years in office, when Democrats controlled Congress. In both 2009 and 2010, the lobbying industry doled out about $3.5 billion to influence federal officials.

Another notable data point that emerged from 2017: The number of registered lobbyists increased from the year before, the first time that’s happened since 2007, when the Jack Abramoff scandal, new ethics laws and tough rules imposed by the Obama administration spurred the industry to move into the shadows.

“When Obama said he was going to change the way Washington works, it was an attack on lobbyists. He really thought he could bring people together in the middle and break gridlock — he didn’t. I don’t think [President] Trump is as thoughtful about it,” Thurber said.

“It’s wide open to the flow of money and old-fashioned lobbying in Washington that [Trump] was theoretically against in the campaign and has gone the other way or hasn’t looked at it at all,” he added.

More than half of the organizations in the top 50 increased their influence spending last year. The Business Roundtable, a group that represents CEOs of the largest American companies, increased its spending by 74 percent over 2016, jumping to more than $27 million.

The American Petroleum Institute, which spent roughly $8.5 million in 2017, doled out 40 percent more than it did the year before on lobbyists. Airlines for America had big issues before Congress, such as reauthorizing funding for the Federal Aviation Administration, and bumped up its spending by 34 percent.

Although disclosures look exactly the same, some filers use the so-called IRS method that factors in other advocacy spending, including political advertisements and sometimes state-level lobbying.

Several trade groups and corporations on the top 50 list use the IRS guidelines for their disclosures, including the Chamber of Commerce, the National Association of Realtors, the newly merged DowDuPont, Koch Industries, Oracle, the Business Roundtable and several defense contractors.

When Dow Chemical merged with DuPont last year, the combination created a lobbying operation that had spent more than $15.8 million.

The organization says that the figure represents multiple six-figure grants given to other groups — such as Amnesty International, Americans for Tax Fairness and the Leadership Conference on Civil and Human Rights, among others — to perform their own lobbying.

The center has also been heavily involved in Puerto Rico, both before and after a hurricane ravaged the island in the fall, working on issues related to its fledgling economy, government accountability and access to health care.

Although the midterm elections are likely to spur gridlock as 2018 progresses, lawmakers still have a significant number of policy issues to tackle. Lobbyists are looking forward to work on an infrastructure spending bill, immigration reform and more tinkering with ObamaCare and the tax code. 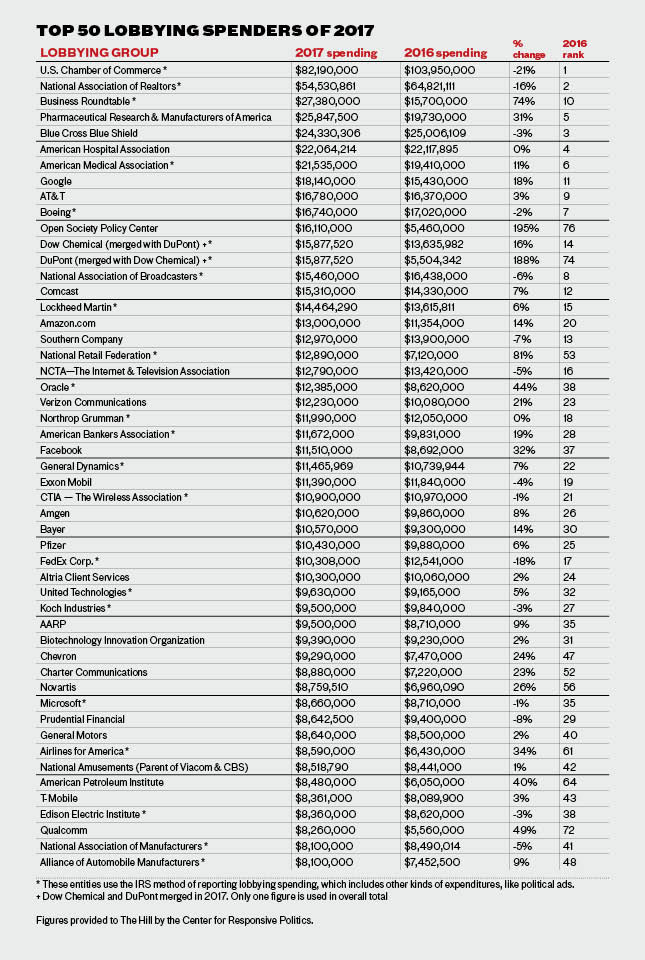 Why companies think paying for abortion travel is worth it