Thousands of papers, some documenting the auction and sale of enslaved Black Americans, were headed for the auction block themselves before Black historians and community members stepped in to reclaim ownership over their past. 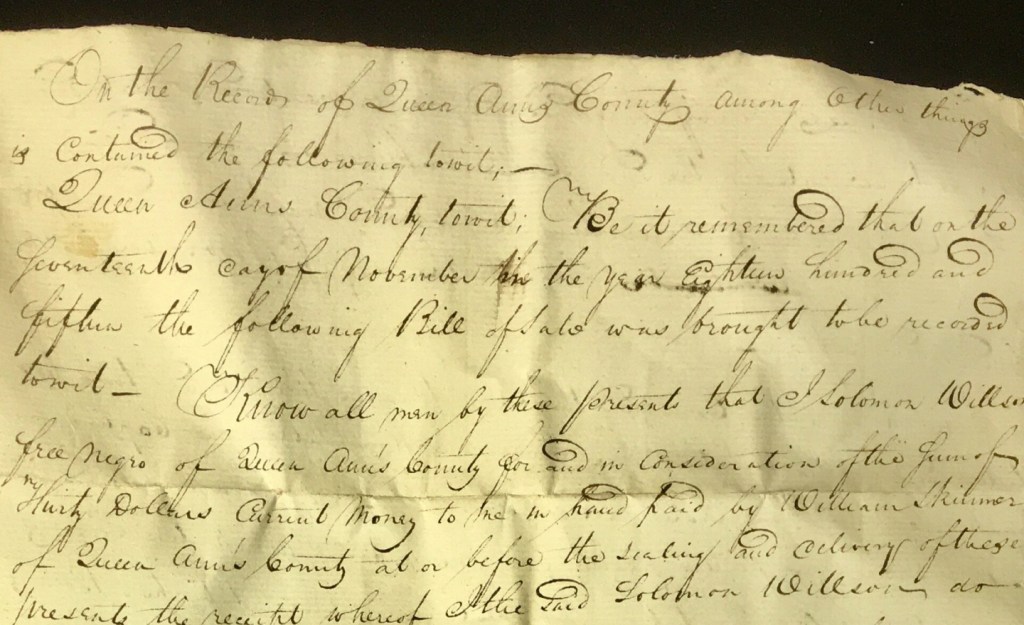 “It was important to the community because this will connect the dots for people and the younger generation, to let them know how things were. To move forward, you have to see what the past was like,” said Carolyn Brooks, a community historian with the Chesapeake Heartland Project.

About 2,000 pages dating from the late 1600s to early 1800s were found in a plastic trash bag in the attic of a 200-year-old house near Chestertown, Md., as the owner, Nancy Bordely Lane, was cleaning it out this spring. The foundation of the house, built in 1803 on property that had remained in the family since 1667, was reportedly damaged and the structure was going to be demolished. The documents were headed for the garbage, but were rescued and delivered to Dixon’s Crumpton Auction in waxed seafood boxes, John Chaski, an antique-manuscript expert, told the Washington Post.

Darius Johnson, a Washington College alum, was one of several people who saw pictures of the documents up on the auction house’s Facebook page. After moving back to Kent County from Baltimore, Johnson became part of the Chesapeake Heartland project at Washington College, in collaboration with the Smithsonian’s National Museum of African American History and Culture and local partners. For him, the documents couldn’t have shown up at a better time.

“This project has started to give me pieces of myself and who I am and it’s something I couldn’t be more grateful for,” said Johnson, who also works with a local homeownership initiative for low-income residents, many of whom are Black. Among the papers was a contract taking over a 50-acre farm originally purchased by Solomon Willson, a free mixed-race man, in 1802.

“Tying in the historical narrative has been critical because I want the Black people of Kent County to know that, just a generation or two away, our people owned something – and within that generation or two, we lost that. It’s not that far out of reach, it’s attainable,” he said.

Lane didn’t know how the collection of documents from several different families that were interwoven through marriage ended up there or how long it had been there. But while she may not have recognized their significance, members of the Black community did, banding together with the college to raise funds and purchase the entire collection. Washington College alumnus and trustee Norris Commodore — the first African American from the local community to graduate from the college and after whom part of the collection is named — and his wife, Terry, were among several Black donors that pitched in to buy the whole collection for a price “in five figures.”

“I love it,” Lane told the Washington Post after learning of the sale. “History should be acknowledged.”

Part of what makes the documents so rare is that these were ordinary families, said Adam Goodheart, director of the Starr Center for the Study of the American Experience at Washington College — small farmers, shoemakers or carpenters rather than elite or wealthy plantation owners.

“These were people for whom slavery was smaller scale, in a sense more intimate,” said Goodheart, adding, “but I think these documents make it clear that the system was no less cruel.”

IN BOMBSHELL INTERVIEW, OBAMA SAYS SOME MEDIA ‘STOKING THE FEAR AND RESENTMENT’ OF WHITE AMERICA

‘CHILDREN ARE DYING’: ACTIVISTS COMPARE RESTRAINTS ON SCHOOLCHILDREN TO KILLING OF GEORGE FLOYD

Several documents record the sale of enslaved men, women and children. Others, such as a financial statement for a young white child, reveal more subtle cruelties, such as the purchases of fabric, shoe and school books she made on income from the stolen labor of three enslaved workers.

At the same time, the documents also contain stories of free Black people, some who escaped slavery, and even their relationships with white landowners.

“When you talk about history in this area, it’s colonial history, which is white history and then Black history is always separate,” said Airlee Ringgold Johnson, a community historian with the Chesapeake Heartland Project. “Hopefully at some point this country will get to the point where it can recognize that history is history and combine the two stories.”

Arie Ringgold Johnson, who is related to Darius Johnson, went to the auction house to comb through the documents with Goodheart. Her own family history in the area dates back to at least the 1800s, but the records stop there.

“There’s a lot of American history that’s still tucked away in people’s attics, including some incredible African American history, because African American history in particular wasn’t really valued by historians and cultural institutions until recently,” Goodheart said. “It was considered to be extraneous…so these kinds of documents that show the ordinary everyday workings of enslavement were considered either to be unimportant or in some cases to be actively something to be suppressed, especially by descendants of families of enslavers.”

For the nearly 3,000 Black residents of Kent County, however, that history is deeply personal. Amid the documents, Airlee Ringgold Johnson saw the name “Wilson” — a name that ran in her family as well as several others on the Eastern Shore. Sherry Wilson, a free man of color whose name was on an inventory found among the papers, was later convicted and imprisoned under a state law that prohibited any Marylander from circulating “inflammatory” antislavery publications.

“It’s so disheartening actually when we look at what we fought for — and we’ve been fighting since we’ve been in this land — to come out of slavery, what we fought for in reconstruction, Jim Crow, civil rights and now it’s coming back. It continues to go on, the fight that we have in this country,” said Airlee Ringgold Johnson.

Taking ‘ownership of our history’

Much has changed in the centuries since, but the legacy of slavery and systemic racism continues to disenfranchise Black Americans. After the police killing of George Floyd last year reignited civil rights protests, renewed interest in this history has put a premium on such discoveries.

“We’re in a moment when there’s sort of a Gold Rush on Black history going on. A lot of museums and libraries and universities are discovering that they really need to expand those parts of their collections – and that’s wonderful, but it also means that large amounts of money are changing hands for Black history in transactions that don’t involve Black people at all,” said Goodheart.

“I think that moments of acquisition of Black history should also be opportunities for restitution and reparations and empowerment,” he added.

To rectify this, the deed for the documents, which are being digitally archived for the public, was handed over to a Black-run nonprofit, Sumner Hall, which operates as a museum, educational site, performance stage, social hall and gallery in Chestertown. The college is also planning to raise an amount of money equal to the purchase price towards funding African American History Education for local youth.

“In the context of Black ownership in Kent County, for me it’s always seemed to have just been about what’s been lost,” said Darius. “For these papers to come about in the way that they did and to have ownership, the collection named after Commodore…that perception of ownership is just really, really powerful to me. It also shows people that we can take ownership of our history and subsequently our situations and our future.”

Darius, Airlee Ringgold Johnson, Brooks and others at the Chesapeake Heartland Project are passionate about educating their local community, especially the youth, of stories like that of Congo Mango, who was born in Africa, enslaved in Maryland, gained his freedom and helped others become free. The collection includes a document recording his purchase of an enslaved man named Cato Daws in order to grant his freedom.

Ultimately, many were relieved that their history would not be auctioned off like their ancestors once were and instead would return to them. Doncella Wilson, a board member of Sumner Hall, still remembers the Saturday morning she saw the collection in a post on Facebook. After seeing the documents in person, she felt the full range of emotions: sadness, anger and connection. Now, she’s ready to share the story with the next generation.

“For some families being able to fill in the puzzle pieces, to be able to see the documents, connect families and gain a sense of self with the documents and a sense of being on the Eastern Shore and knowing that we have great significance,” she said. “I just hope it continues education and opens dialogue…that youth and elders are able to participate in.”

IN WAKE OF CHAUVIN TRIAL, US DEPARTMENT OF JUSTICE INVESTIGATING PATTERN OF UNCONSTITUTIONAL POLICING IN MINNEAPOLIS