A mama black bear and three cubs were found napping in a tree in a coastal Virginia neighborhood early Monday morning, later descending on their own accord late that evening, according to local wildlife officials. 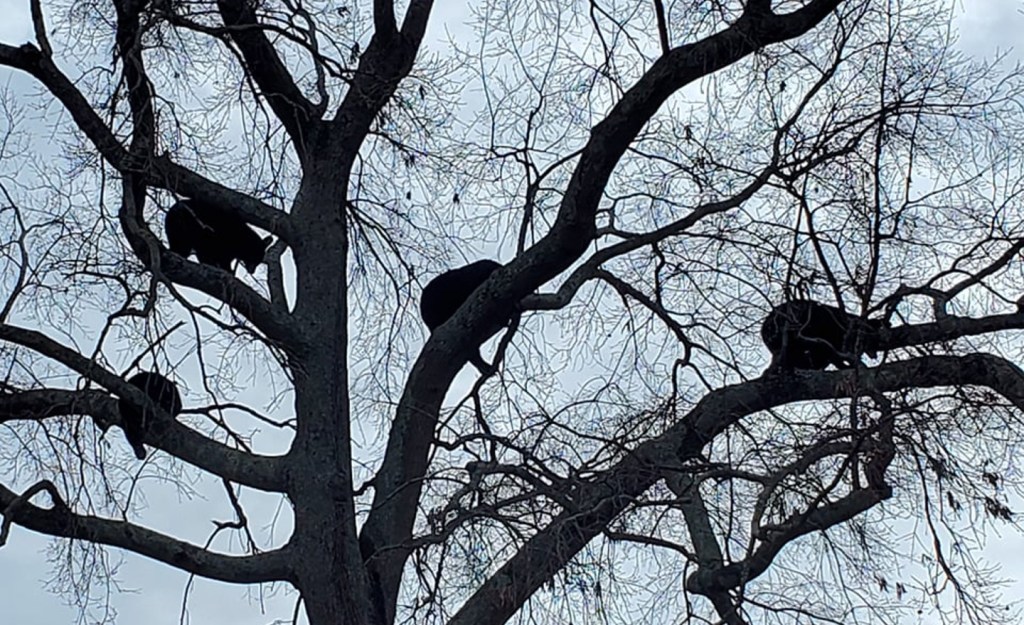 Police officers blocked nearby streets throughout the day and members of the Virginia Department of Wildlife Resources remained close by in case any action was needed, Chesapeake Animal Services said Monday in a Facebook post.

The animal services unit, which operates under the city’s police department, advised neighborhood residents to remain in their homes until the situation was properly assessed.

“Black bears can be unpredictable, especially when sows (mothers) have cubs. This is an extremely stressful situation for the bears, so it’s important to stay away from the area. That includes driving past the site,” Chesapeake Animal Services wrote on Facebook.

Roads were also blocked off to “give them space and encourage them to move along,” the department wrote, and added that “the bears will come down when it is quiet and calm and people stop trying to get close to them.”

Reporters and onlookers reportedly got as close to the bears as they could without breaking police safety barriers.

Authorities were first notified of a possible bear sighting on aptly named Bruin Drive in Chesapeake, Va., around 2 a.m. Monday, The Virginian-Pilot reported.

“It’s not uncommon at all for bears to climb trees,” Gray Anderson, chief of wildlife for the Virginia Department of Wildlife Resources, told The Virginian-Pilot. “It’s also against popular belief for bears to enter a hibernation phase in coastal areas like this one.”

“Our expectation is, if we leave them alone they’ll climb down and go back to their natural habitat,” he added.

In a second Facebook post Monday evening, Chesapeake Animal Services said the bears had descended the tree safely around midnight.

“Update: Mama Bear and three babies came down from the tree on their own and moved on around midnight,” the department wrote. “Life’s a Bear Sometimes.”

Bear sightings in the area are not uncommon, but the bears’ appearance in Chesapeake, a busy residential area, is unusual.

Last year, two bear sightings were reported in nearby Virginia Beach, and another was reported to frequently roam a Suffolk, Va., neighborhood “at least twice a day.”