Can Africa’s last lions be saved from human greed?

“The so-called civilized people? They had no excuse. They hunted for what they called ‘trophies,’ for the excitement of it, for pleasure, in fact.” —Romain Gary, “The Roots of Heaven,” 1956.

Ever since I heard my first lion roar in the outback of the Chyulu Hills in Kenya in 1975, I have been haunted by the regal splendor and majestic presence power of the lion. Its voice answered that of the thunder’s in the mystifying outback of Africa, the only sound that was louder than theirs.

A global warning needs to be sounded and action taken against big game hunters while there is still time. The licensing of murder begs the question, why are they killing? The lion of Africa is in peril. It is so endangered that it could be gone in our lifetime. Can the world possibly imagine a world without Lion Kings?

We no longer need to kill to survive as our ancestors once did. The recent slaughter of Cecil the lion must serve an admonition to what we are doing to the natural world as a whole.

The elephant crisis and the demand for ivory continues but the drop in the lion population is even more staggering. Canned hunting incites trophy hunters, which in turn attracts poachers. Within a few days of Cecil’s killing, five poachers went into Tsavo in Kenya and killed five elephants — news which hardly reverberated in the world’s conscience for what humanity is also doing to the largest land mammal on Earth.

Henry David Thoreau once wrote, “What if a greater race of beings were to make flageolets and buttons out of our bones?” Indeed.

The lion’s roar is ineffable, a sonic detonation, a reverberant spell, a guttural eruption discharged into the entire outback of Africa. We should all feel privileged to live in an age when one can still hear that unique sound calling out to the rest of creation, but for how long?

There used to be well over 100,000 lions in Africa a little more than a generation ago, but due to habitat loss, trophy hunting, inbreeding and poaching their numbers have dwindled to perhaps 20,000 today. There may be as few as 3,000 male lions in all of Africa according to the conservationists Dereck and Beverly Joubert. Over 600 lions are killed every year. Lions have already disappeared in 26 range states in Africa. Only a few countries, such as Tanzania, Kenya, Zambia, Namibia, Botswana, Zimbabwe and South Africa, harbor populations of at least 1,000 lions. The lynch pin in the ecology of the African savanna walks on the tightrope of survival. 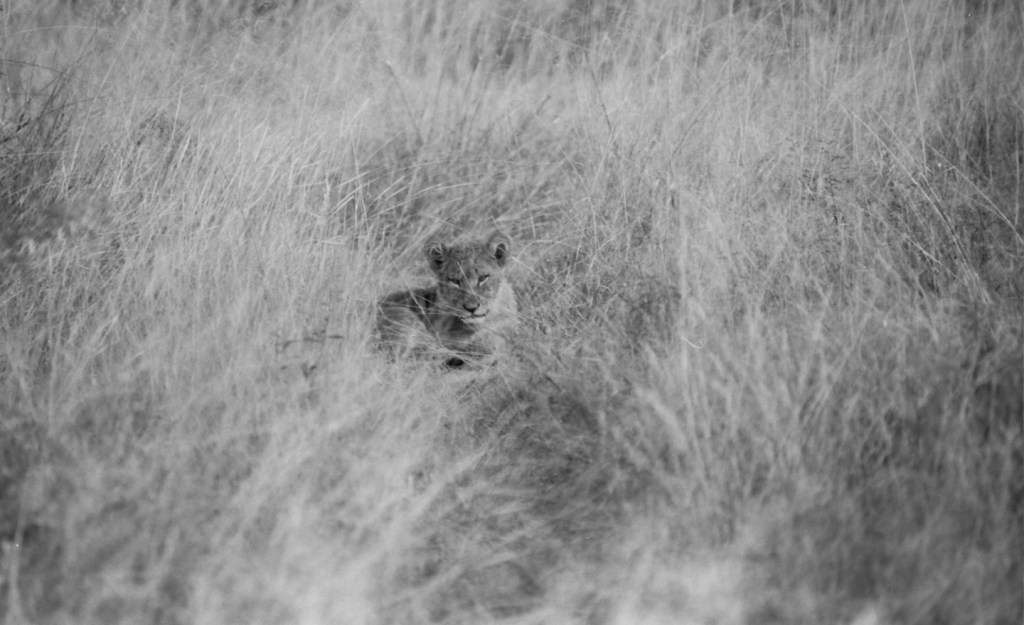 The next ten years are crucial in bringing back a being both stigmatized as vermin and considered symbols of nobility. Lions haunted early man’s dreams since the time of the cave dwellers in Chauvet, France millennia ago.

Koni, a former elephant hunter in Kenya of the Waliangulu tribe, told us perhaps the greatest story concerning a lion. Forty years ago, his father was in the outback and late at night was befriended by a large lion with a porcupine quill entrenched in his paw. Koni’s grandfather took out his knife and gingerly took out the quill, which would have kept the lion from hunting. A few days later the lion and the hunter saw each other. The lion looked at the hunter and slowly lured the hunter into the bush. The hunter followed for several kilometers not knowing what the lion was up to, until he finally came to a clearing. There in a meadow, lay a newly killed giraffe; it was as if the lion had taken to thanking the hunter for having saved his life. It is a miraculous story we will highlight in our film “Silent Pride.” Losing the lion would be a nightmare in our ability to hold onto the ecology and the larger biological immune system of Africa.

In light of the almost unprecedented global outrage against the killing of Cecil, the lion in Zimbabwe, it behooves humanity to rethink the legitimacy of trophy and canned hunting once and for all. Southern Africa is undergoing a severe drought. How will it impact the lions there? Already hundreds of elephants have died due to lack of water.

Cubs, which are regularly taken from the wild, are bred for lion hunts and once they are killed their bones are sold to the increasing Laotian and Vietnamese lion bone trade. Some mistakenly believe that wild lion bone is more potent than captive-bred lions. This practice, which encourages poaching, is taking its toll on the last lions of Africa.

Trophy and canned hunting may not seem like a wayward activity to some. The idle rich and members of the various safari clubs around the world, especially those in the U.S., use broad measures and arguments to convince themselves of their prowess, and the necessity to hunt the great species of the planet.

Whatever psychologies apply, Elspeth Huxley, the grande dame of African letters, said it best, “You’ve substituted the skill of one man versus one beast for the skill of the whole race of man versus one beast. So you have the brains and resources of every one from geniuses like Priestley and Pasteur to modern big business combines like ICI and Du Pont, pitted against the wits of one poor African lion. It isn’t sporting; it isn’t even exciting. True sport involves equality between rivals, you see. It isn’t sport, it’s murder.”

As Lion Aid in London has exclaimed, trophy hunting from America and Europe has been erroneously proposed as a conservation tool for decades. The charity stated, “It is arguable that strictly regulated, ethical and sustainable trophy hunting offtake of selected African species might justify annual offtakes, but it has been shown time and again that trophy hunting is not regulated, not ethical, and not sustainable at current levels.”

It has been said, as stated in Raymond Bonner’s “At the Hand of Man,” that hunting is the only way for conservation to go forward. Supporters argue that money raised from trophy hunting must go to communities, and certainly without the people of Africa benefiting from the wildlife, the wildlife has nowhere to turn to; it is doomed “as certainly as the dodo.” But most money does not help communities. It helps hunting outfitters.

Can the world in this tested hour find another way? With all the money at the world’s disposal, with all the world’s billionaires, can the human species not find the conservation will to save a being that has taunted childhood’s very imaginations since children first learned to talk?

Lion Guardians in East Africa is near exemplary in employing Maasai warriors and other pastoralists in mitigating human and wildlife conflict, and especially lion conflict in over a million acres in Kenya and Tanzania. It should serve as a model for the rest of Africa.

While Maasai used to pit their bravery and strength against lions in a formal lion hunt called the alamaiyo, their ritual combating of lions was to show off their bravery. Whoever killed the lion then shouted the name of his clan. An entire dance with the life force was enacted and life was never taken gratuitously. Warriors only killed lions to prove their courage or if their cattle were at stake.

Canned hunts are the mark of cowards. Trophies are the carcasses of an abject morality. By contrast, the Bushmen in the Kalahari honored the extraordinary prowess of the greatest hunter. They lived in a coherent pattern of respect they extended to all their prey and even the top predator. The lions would come to the water hole at night to drink while the Bushmen went during the day. That mutual recognition is a model of relationship and one reason why the Bushmen have survived for well over 3,000 generations.

There are those in the U.S. Congress who wish to ban lion trophies. But the profit motive and the iron grip of special interest groups who believe in shooting the most treasured mammals on Earth for prestige, most unfortunately, still has the upper hand. 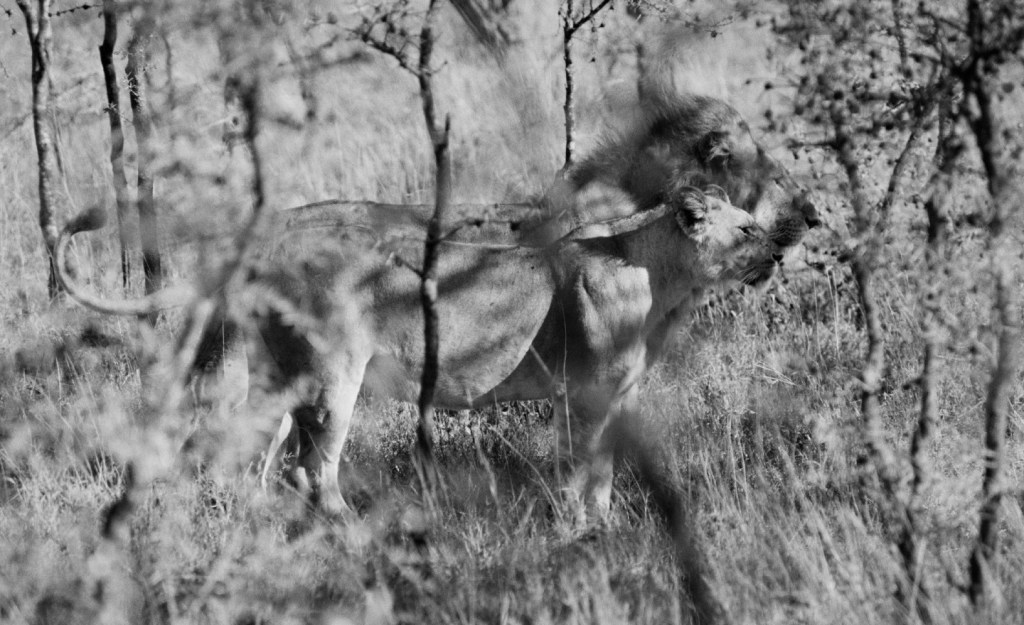 Along with twin threats of poaching and climate change, what is to become of a species that is killed for so-called sport? As long as our civilization deems it worthwhile to forego the principles of non-violence, nature will always bend under the strain of man.

Now is the time to find an alternative before it is too late. Narnia, the Lion King, the MGM lion — the lion is more than an icon, it is the very symbol of freedom in the wild.

How lions fare in the coming years will depend ultimately on how we can stop the onslaught of greed and corruption at all levels, individual and governmental.

It was a major elephant researcher in South Africa who told us that the answer to saving what remains of the natural world would come not through science but through poetry, by which she meant our emotional commitment to life, our ability to draw from our reserves of awe before that which created us.

It was Edward Abbey who remarked that if humanity does not preserve large tracts of the wild — with eagles, wolves, bison, lions, tigers, bears and elephants — it would invite a future that is a high-tech slum. We will have lost the Earth, and no amount of visitations to other planets will remedy the loss of a roar that once sprang from earth’s creatures.

This time will be gauged not by the symphonies, nor art we exult in, nor the skyscrapers we concoct, nor the satellites we launch beyond earth’s atmosphere, it will be remembered by our ability to salvage our relationship to Earth and its biodiversity. 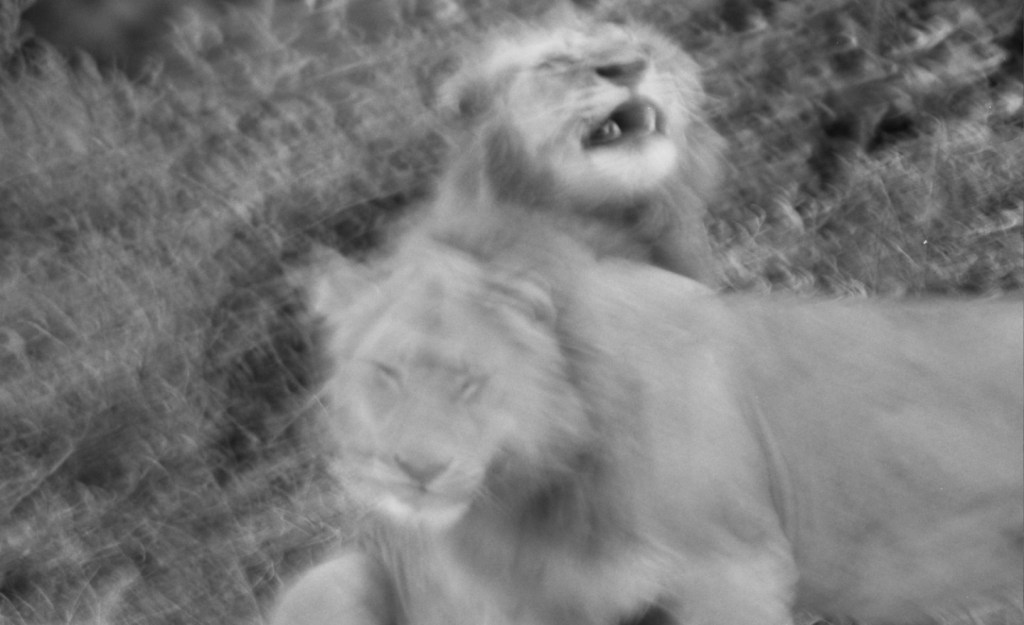 The reality behind the murder and wanton destruction of a beautiful being called Cecil should activate a new and final wave of response, not just for the animals of the world, but also for our children.

The decision Delta, American and United airlines made to ban trophy imports should spread globally and immediately.

Humpbacks are coming back in Australia. There are more mountain gorillas now than 10 years ago. Lions too can come back as the great social cat on Earth, if given a respite from the ignorance and perfidy of our ways.

For in the end, the beast within the human heart does not need more statistics and algorithms to tell it that it has not yet landed on Earth, as our soon-to-be 14-year-old son Lysander once told us. His son must be able to know that lions and tigers and polar bears still roam the hinterlands, not just of the imagination, but also of the wild.