A major dam project threatens a way of life

“There, out there, the aliens were building a dam across the holiest spot on Earth. They were going to flood the sacred gorge of Kariba and drown the ancient graves of the Holy Ones under many feet of water. The whole thing was a sacrilege that must not be allowed to pass unpunished. It was a deliberate challenge to a war of extermination hurled in the teeth of every Black Man by those who lived in Salisbury.”

Over the last generation the World Bank has slated $75 billion dollars for 500 dams in almost 100 countries. Like the Three Gorges Dam in China that displaced several million people, the Grand Coulee Dam in Washington state and the Grand Inga in the Congo are behemoths of environmental degradation. As is the dam that just broke sending catastrophic flooding of toxic waters over Midland, Mich. They are also disasters for local peoples who once thought of rural electrification and localized energy as the answer, and whose lives have now been completely subverted by the giantism of dams.

Years ago, we visited northern Namibia near the Kunene River on the border with Angola. Twenty years ago, we heard of plans to build a megadam 535 feet tall at a cost of $500 million. It was put on hold in 2015. Recently, a new project at Epupa and at Baynes on the lower Kunene River threatens the Ova-Himba, one of the most isolated semi-nomadic tribes in all of Africa who are very vocal in their opposition to the dam and who have, of course, not been consulted. International Rivers, a group in California, believes there are legal measures that can protect the river and keep the people from having to be resettled.

A generation ago, we flew over massive dry river beds, a fantastic swarm of veins encrusted in a sandy landscape extending in every direction in a vast desert, which is the world’s oldest. An extraordinary Dantesque landscape unfolds as sporadic wooden huts spot the dry, almost purgatorial landscape. The sands are a haunting orange and yellow, and the mountains are encased in hundred-kilometer valleys that appear shorn of life except for hardy xeric plants that can withstand the heat.

We were met by a guide, Koos, a former soldier from South Africa who has seen many battles all over southern Africa. He who was doing all he could so the Himba, the Red People — so called because of the red ochre with which they cover their bodies — could maintain their way of life. His dream was to see the once plentiful gazelle and zebra and springbok herds return. Watching a mother from a village in the Marienfluss Valley churning milk in her gourd, which she does for hours on end, was to witness a millennia-old pact with the Earth. Cows graze in the morning and return at sunset. The tempo of the land is slow, the human equivalent of geologic time. The language resonates with the expression of a people bound to the song of the land. In Himba, watwarajinja means a person who takes a story from one to another. Maenjinijeko means, if you are alone anybody can come talk to you.

The potential ravages of a dam would wash away the irreplaceable roots to the Earth the Himba are struggling to hold on to, as are tribes all over the planet. In Himba, the word for year also means rain, which when it falls is god given. In counterdistinction to the rains, is the holy fire which is an embodiment of the ancestors. Some tend to the fire and if people leave the community and the practice of tending to it, they may become ill. When they return to the holy fire, they get healthy again. There is something inexplicable about the flame which quells the fear of darkness and the cold. 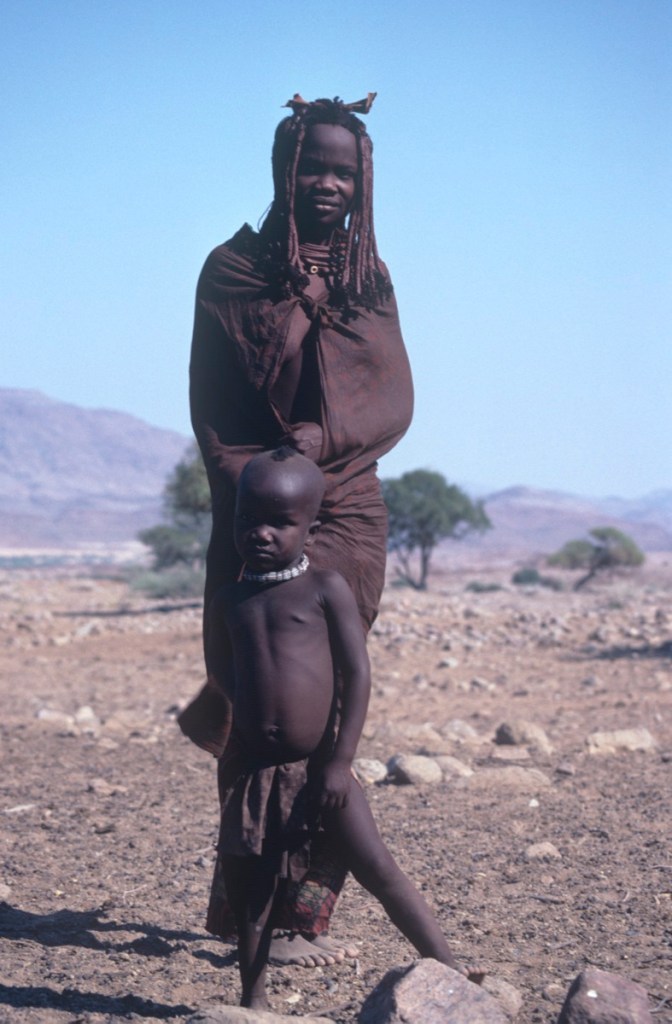 Originally thinking the dam to be small, Himba elders made no substantial objection to the structure, but some Himba as far back as a generation ago, realized that the dam would mean the demise of the Himba, the end of a way of life that extends far back to the beginnings of the nomadic impulse. The technique the Himba used for gathering seeds is a testament to their adaptation to one of the harshest lands on earth. In former times, it is after the rains that the Himba would individually separate grass seeds from the sand and collect them as ants took them out of their nest to dry. Ground meal was made from the seeds. Wild animals and plants provided for everything. Eventually the nomadic lifestyle gave way to herding cattle. Today the round, bare Himba compounds made of dung, earth and wood bear witness to the denuded almost lunar landscape eaten by the sheep and cattle that is the mainstay of the tribe. In the old days, zebras, giraffes and even elephants used to roam these immense valleys whose mountains are coated with fine windswept sand that sweeps from 80 kilometers away on the Skeleton Coast.

As one elder has said, “The Kunene is a living organism and needs to be protected. All will die under the water, the Baynes dam will affect us. It’s our grazing area, farming is our livelihood. Different species, wildlife, most graves will be under water.” Another elder in Epupa has said, “We want to remain in our culture like our forefathers. We feel the dam is our death. We want to live under the trees. We don’t want their promises. Hospitals, schools are promised if we agree to the project, but the existing clinic has no medicine. The land is our bank. We don’t go to the ATM’s, the money is in our land and forest and livestock. We don’t want our bank under water. The holy mountains and all must be treated with respect.”

More than a century ago the Himba’s relatives, the Herero, fought with and were gunned down by German colonialists, the first instance of genocide in the 20th century. The women were made to wear several layers of thick multicolored shirts and dresses to hide their nudity. The Protestants imposed a dress code which endures to this day and which in the light of searing temperatures appear remarkably out of place. The dam, if it were ever to pass, would flood the lush omerungu palm trees, which have always provided the Himba with fruit during time of drought. Will the dammed waters of modernity be stopped in time so a proud people will not be relegated to the margins of society in the name of progress?

Today, the modern state holds sway over almost everything, rendering the last migratory people sedentary. Will the Himba conform to the tax system, power lines, sewer lines and government edicts? Modernity is usurping authority from the fire of the ancestors and those forces invisible to the eye that have always been linked to the natural world. The necessary flow of the waters of life may give way to the inexorable forces of finance. On our last day with the Himba, a blazing meteor descended into the lower atmosphere like the body of a supernatural being presiding over Kaokoland. Or was it an omen that certain worlds should stay clear of the ravages of civilization, an omen guiding the Himba onward? Or perhaps it signaled the coming of irreparable change. Only time will tell whether the powers of modernity and the colossal waters of deluge will win out or whether the holy fire will continue to burn in the slow ritual care for ancestors that assures the maintenance of tomorrow by honoring the earth and the past.

“When all the rivers and valleys and forests and hills of the world have been priced, packaged, bar-coded and stacked in the local supermarkets, when all the hay and coal and earth and wood and water have been turned to gold, what then shall we do with all the gold?”