Saving the last of the largest birds on Earth

Red-necked ostriches are the largest subspecies of the world’s largest bird. iStock

One day, if we are not very careful, like so many other species, there may not be any around. How many times does one expect to see a lion or an elephant and instead one comes across an ostrich, or a small flock or a large aggregation walking or running at full speed across the plains of Africa? Or once, as we were showing our son the Indian Ocean for the first time, we saw an ostrich prancing on the beach amongst algae right there on the South African coastline. They are unlike any other animal on Earth. They are the world’s biggest birds. But unlike the more common ostriches, the Maasai ostrich, the Somali and the Southern African Ostrich, which people usually see in East and Southern Africa, there is another subspecies that is even bigger, the red-necked ostrich in Senegal and it is the biggest bird on the planet. It needs protection and conservation funds. Humans long ago destroyed and caused the extinction of the moa in New Zealand, who were 12 feet tall and about 500 lbs.

Conservation efforts are needed to save the very rare red-necked ostrich because they are unique and the largest bird left on Earth. Bill Clark has been at the forefront of conservation and anti-poaching efforts all across Africa for decades. The following words are his:

There are four subspecies of ostriches alive today. Of these, the nominate subspecies, Struthio camelus camelus, commonly known as the North African red-necked ostrich, is the largest. Adult males grow to 9 feet and 340 pounds, making them the largest birds on Earth.

They’re also among the rarest. The North African red-necked ostrich is classified as “critically endangered” by IUCN, and it’s listed on CITES Appendix I. It once inhabited 18 countries in northern Africa, from Senegal on the Atlantic clear across to Sudan on the Red Sea. Today, remnant populations are identified in only four countries (Cameroon, Chad, Central African Republic and Senegal). These populations are fragmented and there is doubt whether any of them is viable.

The ostriches were exterminated for several greedy reasons. A century ago, their feathers were popular in women’s fashions. More recently, ostrich skin became popular for men’s cowboy boots. Some entrepreneurs hyped ostrich meat as being low in cholesterol. Some artisans thought ostrich eggs (the largest single cell on earth) to be of decorative value. Some herdsmen didn’t like ostriches because they drank some of the ever diminishing surface water.

Senegal’s National Parks Directorate conducted a month-long field survey of ostriches in on 8,000 square miles of the country’s prime ostrich habitat, Ferlo Biosphere Reserve. That survey detected several ostrich footprints, a few fecal samples, and one feather. It concluded that the ostrich still survives in Senegal, but its population could not be more than a dozen individuals. The fecal samples and feather were sent for DNA analysis at The Hebrew University of Jerusalem, which confirmed the bird to be Struthio camelus camelus.

The most promising method of saving Senegal’s ostriches is via “reinforcement” – a process of adding more ostriches of the same subspecies to the existing population to improve its numbers and genetic vigor, and thus enhance its prospects for survival. At present, the Senegal National Parks Directorate is working with the Israel Nature and Parks Authority on “Project Avraham” – the restoration of ostriches to Senegal. This project is being supported by Friends of Animals, a US-based NGO which has worked with both the Senegalese and Israelis for more than 30 years.

The project intends to ship ostrich eggs from Israel’s Hai-Bar Wildlife Reserve to Senegal’s Ferlo North Wildlife Reserve. Those eggs will be incubated and hatched at Ferlo, and the chicks carefully reared so they can be used to reinforce the wild population and help to rescue this largest of all birds from extinction.

This is part of a much larger project to rescue the entire Ferlo. The Ferlo is the Senegalese term for the Sahel. And like the rest of Africa’s Sahel, the Ferlo has been crushed beneath multiple burdens of land and water mismanagement, over-grazing, habitat destruction, climate change and desertification. But each of these is a problem that can be addressed and solved.

Over-grazing by too many livestock is a major problem. This is being addressed by negotiating with the local Fulani people to reduce the sizes of their herds of cows, goats and sheep.  But the Fulani insist on alternatives. Every one agrees – let’s try eggplant, tomatoes, lettuce and lentils.

Decades ago, a Fulani family could keep only as many livestock as there was water available to drink. If a family brought 100 cows into a habitat that could provide water for only 50, there would be a crisis, and many cows would die. But aid agencies wanting to help the Fulani began digging boreholes into the Earth, tapping the water table for large amounts of “ancient” water that had been lying there for centuries. But with abundant water available, the herdsmen grew their livestock to larger and larger numbers.

Before long, there were more livestock than the vegetation could properly feed. Most of the nutritious and palatable plants were consumed first. Large areas of landscape were over-grazed. The hot, dry wind eroded the exposed topsoils and carried them up. But whatever goes up eventually comes down, often sifting into the lowest places on the landscape. The lowest points were the natural basins that formerly held seasonal rains well into the dry season. Some basins were so deep they could store rain water until the next year’s rainy season replenished them. Some water could always be found in the Ferlo. But that was long ago. Silt has filled in virtually all of the depressions, and the only water available at the end of a dry season is at the over-taxed boreholes. That means very little water for wildlife. 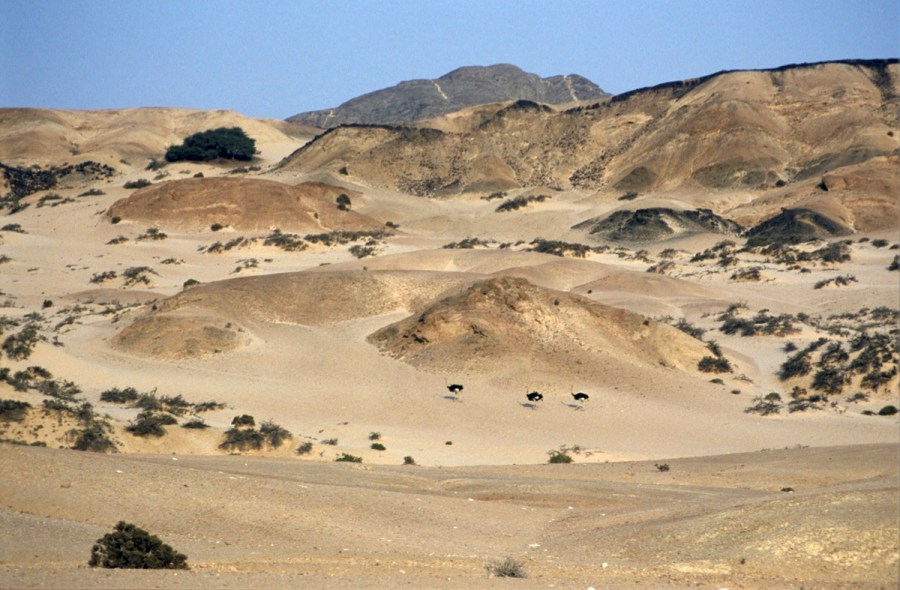 Certainly, local wildlife, including ostriches, are impacted negatively. Yes, yes, yes, all the experts agree that ostriches can survive without access to drinking water. But people with field experience know very well that ostriches do like a nice drink, and that good hydration can improve the health and reproductive capacity of these birds. And since they are “critically endangered” reproductive capacity is an important consideration.

Of course, ostriches are not the only birds in the Ferlo. There are various resident avians, and also a large number of migrating birds. The migrant birds must be suffering enormous fatality rates – nobody knows for certain. But just think: these birds leave Europe in October or November and fly to Africa for the northern winter. But to get to their wintering grounds, they need to cross the Mediterranean and then more than 1,000 miles of waterless Sahara. They’ve got to be very thirsty by the time they get to the Sahel, so those seasonal water ponds must have been welcomed. But now, those ponds are nearly all gone, and the migrants need to continue flying another hundred miles, or more, to find water. How many expire along the way is unknown.

As they say, this ain’t rocket science. The Senegalese, Israelis and Friends of Animals have agreed upon a way forward. A fence has been erected to protect 12,355 acres — a good start. It’s an exclosure fence to keep livestock out. Inside the fence, habitat rehabilitation is taking place. The first priority is to start digging out selected ponds. Remove the silt, spread it in a safe location, plant it with native grass seeds, and let Mother Nature tend the process. With these natural depressions excavated to their natural contours, the ponds should be able to hold more rainwater next year. Meanwhile, on the other side of the fence, the project is helping the Fulani villagers grow alternatives to animal protein. Israeli-pioneered dripper-irrigation is now being used in village gardens. And Senegalese rangers are teaching the villagers that it takes about 1,840 gallons of water to “grow” one pound of beef, but only about 43 gallons of water to grow one pound of eggplant. More veggies and less beef saves water, can help to reverse habitat destruction, and is healthier for everyone in the village.

Meanwhile, the Senegalese rangers are also assuring the future of the local wildlife. They’re devoted, competent and experienced. And they’re working with some iconic Sahelian species such as dama gazelles and scimitar-horned oryx antelopes.

Those oryxes are an important success story. They’re classified as “extinct in the wild” by IUCN.  Like the ostriches, they formerly inhabited northern Africa from the Atlantic to the Red Sea. But unlike the ostriches, they were shot out everywhere. Despite repeated surveys, no oryxes have been found anywhere in the Sahara or Sahel. Their only hope is reintroduction.

That brings us back to Project Avraham. It’s named for Avraham Yoffe, the first director of Israel’s Nature and Parks Authority. Back in the 1970s, Yoffe understood that many of Africa’s wildlife species were doomed to local extinctions. So he started nucleus populations of oryxes, ostriches, addax antelopes and others at Israel’s Hai-Bar Wildlife Reserve — a “hedge” against the extinctions that he saw coming. And those extinctions did come.

Then, in 1999, long after the oryxes had been exterminated in Senegal, Senegalese and Israeli rangers, and Friends of Animals, began discussing a cooperative project. A team of Senegalese rangers was invited to Israel where they were tutored at the Hai-Bar, and they learned the basic care, management and husbandry of the species. Once the Israelis were satisfied that the Senegalese had learned their lesson, a nucleus of eight oryxes was transported from Israel to Senegal.

Proof that the Senegalese had learned their lesson lies in the population numbers. There are now more than 550 oryxes in Senegal, and the number is growing. Most of these oryxes are in the Ferlo, their ancestral habitat.

Next will come the ostriches. Everything is all set up to do the project: newly built breeding sheds, an incubator, a little corner of the village garden set up for fresh greens to feed the ostrich chicks, periodic visits from the veterinarian, and a group of Senegalese rangers with training (at the Israeli Hai-Bar reserve, of course) in the care, management and husbandry of newly hatched ostrich chicks. All we need now is for air express parcel services to reopen their Tel Aviv – Dakar route after the Covid-19 shutdown, and for the Israeli ostriches to start laying eggs again (they’re seasonal breeders, laying eggs just once a year.

Considering the fragility of all species in this remarkable time, the opportunity to help conserve the largest bird on Earth is a unique one. We are faced with the diminishment of giants everywhere. From elephants, to whales, to whale sharks, to stave off extinctions worldwide is increasingly defining the human condition. The red-necked ostrich is one of hundreds of birds and thousands of other species facing disappearance. Its home is a very restricted one and it is flightless, but is should move those of us who can help its future, to act. It moved Job in the Bible to take notice and should move those of us who can, to support this remarkable but gentle giant. While it is a myth that ostriches bury their heads in the sand, it is our responsibility to summon a much further gaze towards the future of life than the one we have imposed upon the world in the last 50 years.

“There is no sound which issues from the throat of any creature to compare with that of the lion’s voice. It has been sometimes likened to the noise ostriches make, and this is true to some extent of the distant roar of the King of Beasts.”

-Sir Alfred Pease, “The Book of the Lion”