The 2020 election marked the first time in 20 years that Georgia sent a Democrat to the U.S. Senate, and the first time in 28 years that it swung for a Democrat in a presidential race. The results represent a signal victory for progressive organizers. While Georgia had been trending blue for years, it was a well-funded, coordinated effort to turn out Black voters that finally delivered the Peach State to Democrats, and with it, unified control of government.

Even in this election, however, Black turnout still lagged behind white turnout. While post-election news reports focused on the extensive work to mobilize Black voters, Democratic organizers didn’t close the turnout gap. They only narrowed it enough to eke out a win.

“One thing that is very consistent is that disparities in voter turnout by race and ethnicity are entrenched in our electoral system,” said Mindy Romero, director of the Center for Inclusive Democracy at the University of Southern California. “No matter what election you’re looking at, you’re always going to find a significant difference in turnout rates by race and ethnicity.”

The gap in turnout impacts who gets elected and how they govern. For the climate movement, low turnout among climate voters is a major barrier to achieving progress on climate change.

“The vast majority of Americans want to see action on climate,” said Brionté McCorkle, executive director of Georgia Conservation Voters. “Yet, we keep getting these people in office who just don’t make it a priority. That, to me, is a function of a broken democracy. We’ve got to make sure that democracy is functioning so that we get the real representation that we deserve.” 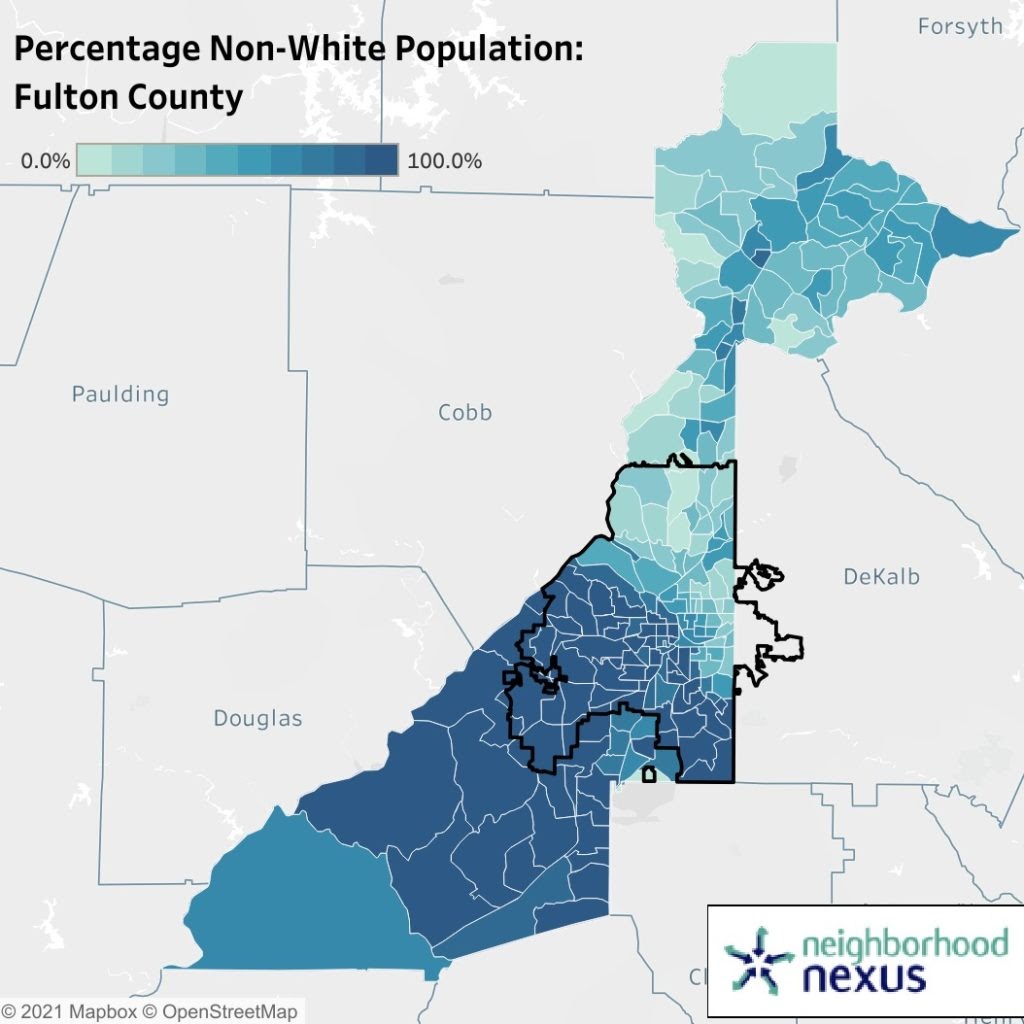 Fulton County, Georgia, which includes Atlanta, is highly segregated. The north side is mostly white, while the south side is predominantly Black. The data is broken down by census tract. CREDIT: Neighborhood Nexus 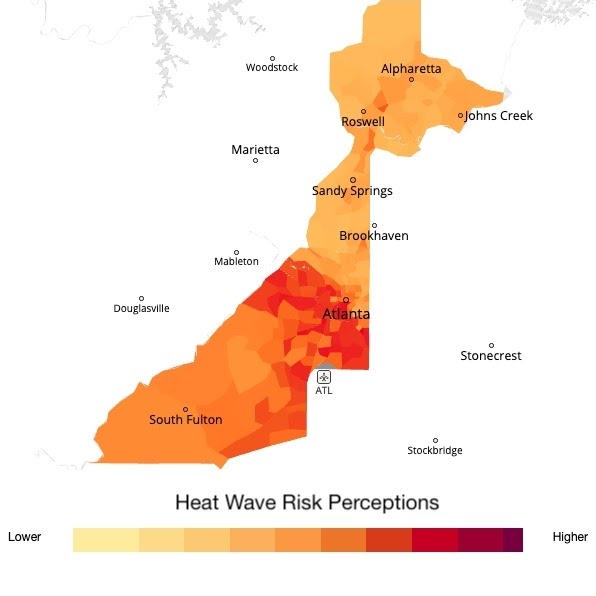 This map shows how different communities across Fulton County gauge the risk of extreme heat. Darker colors indicate that people believe heat poses a greater threat to themselves, their family and their community. The data is broken down by census tract. CREDIT: Yale Program on Climate Change Communication/Utah State University 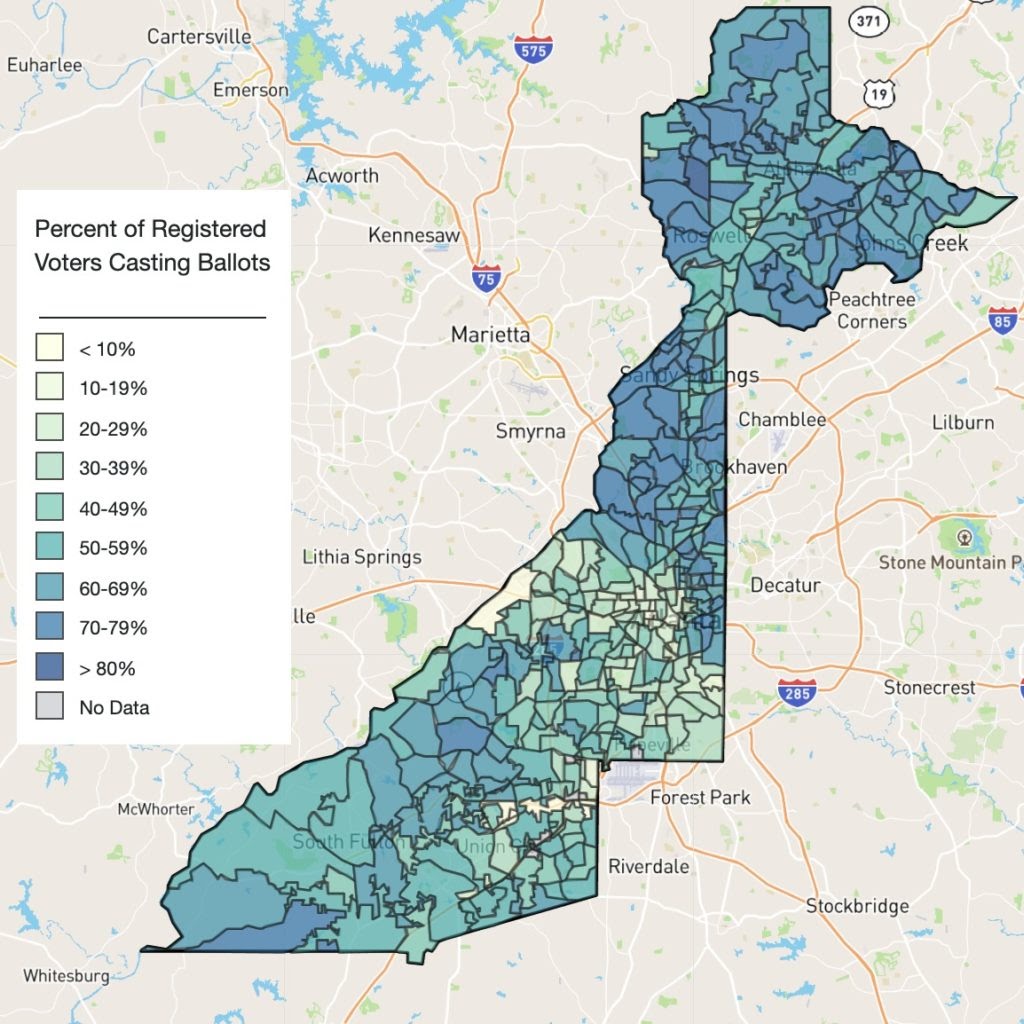 This map shows turnout for early voting for each precinct in Fulton County for the 2021 Georgia Senate runoff election. CREDIT: Center for Inclusive Democracy.

The turnout gap is a difficult problem with deep roots, Romero said. Americans typically learn how to vote from their parents. Because immigrants have no history of voting, they cannot teach their children how to vote. The same is true of many Black Americans, who weren’t guaranteed the right to vote until the Voting Rights Act was passed in 1965. Newly enfranchised Black Americans had no tradition of voting.

“You have to sort of figure it out, and part of figuring it out is going to vote with your parents,” McCorkle said. “What about communities of color? Their parents had a really tough time voting because of laws that prevented them from being able to vote.”

It can be difficult to navigate the often byzantine process of registering to vote, finding one’s polling place and making sense of the ballot. McCorkle said that climate groups need to join progressive groups in pushing to make it easier to vote.

Republican officials in Georgia have made it harder for Black people to vote by closing polling places in Black neighborhoods and repeatedly removing thousands of Black residents from the state’s voter rolls. Following Democrat’s recent victories, Republicans in the state legislature have sought to set new limits on mail-in voting.

“If there are things that are preventing people from being able to cast their vote, we as the environmental community need to be there standing alongside the voter rights advocacy groups, like Fair Fight,” she said. “If people of color, low-income folks are being prevented from voting, then we’re not getting true representation on the issue of the environment. We have to protect democracy.”

Protecting the right to vote, however, is only one factor in getting people of color to the polls. Lawmakers can make it easier to vote, Romero said, but this alone won’t close the turnout gap.

“In California, for instance, there’s been a lot of work in the last decade to increase voter registration and turnout. We’ve seen huge increases in voter registration. We’re at 88 percent for the state,” Romero said. “But the gap between whites and Latinos and Asian-Americans is about the same as it was four years ago, and as it was four years before. Turnout among everybody increased, but the difference in turnout stayed the same.”

People need to feel motivated to wake up early and stand in line, she said. That is a challenge when campaigns don’t regularly reach out to people of color or speak to the issues they care about. 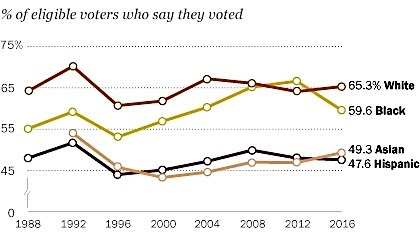 Black voter turnout has historically lagged behind white voter turnout. In 2008 and 2012, when Barack Obama was on the ballot, Black turnout matched or exceeded white turnout. Turnout is typically lowest among Asian and Hispanic voters. Credit: Pew Research

“Voters of color are much less likely to get any sort of kind of outreach from campaigns or candidates,” Romero said. “The case has to be made for why their vote counts in the system that has historically pushed them out, in a system that still is dominated by people who are not focused on their community, who are not representative of their community.”

People of color are more likely to turn out when they believe that the outcome of the election will have a tangible impact on their lives, and that their vote will make a difference in the outcome, she said. To that end, elections need to be competitive.

In Georgia, organizers were able to turn out Black voters because the races were tightly contested, and because election officials shared demographic data on voters, allowing organizers to target voters of color, said Bernard Fraga, a political scientist at Emory University and author of “The Turnout Gap.”

Organizers spent years undertaking a concerted and well-funded campaign to register and mobilize Black voters by focusing on issues that affected them. Their success should prove instructive for the climate movement, McCorkle said.

Even though people of color tend to worry more about climate change than white people, climate groups tend to be overwhelmingly white and middle-class. Their progress toward diversifying has been slow and stilted, and their work in reaching out to people of color has been scattered. Latinos, for instance, are less likely than white Americans to say they have been contacted by an environmental group.

“All of these organizations are hiring directors of diversity because they’re understanding that they have to change the way that they look at issues, talk about issues and operate internally so that they can be more inclusive of communities of color,” McCorkle said. “Only then will the solutions that we advocate for be completely and truly sustainable. You can’t make a victory without including the community that is most impacted.”

Jeremy Deaton writes for Nexus Media, a nonprofit climate change news service. You can follow him @deaton_jeremy. This story was made possible by a grant from the Open Society Foundation.