No-knock raids gained momentum with the development of Special Weapons and Tactics (SWAT) teams in the late 1960s, trained to act quickly and use overwhelming force to address especially dangerous situations. Police departments particularly in L.A. and other cities, sought similar military tactics and equipment in response to civil unrest. Meanwhile, the War on Drugs, revitalized under the Reagan administration, spurred a significant rise in SWAT raids, the use of paramilitary equipment, and the number of no-knock raids used in pursuit of illegal drugs.

Between the War on Drugs and the militarization of policing, no-knock warrants have become routine for police departments across the country. Although designed for the most egregious crimes, no-knock warrants are most commonly used in pursuit of narcotics, with 60 percent of SWAT raids in pursuit of drugs. In addition to the overwhelming force and paramilitary equipment, such as battering rams, flashbang grenades, and automatic weapons, no-knock raids are often conducted at night. Between 2010 and 2016, 94 civilians and 13 police officers were killed due to dynamic entries. An estimated 8 to 10 cases per year result in the death of an innocent civilian as a result of a no-knock warrant.

In March 2020, officers of the Louisville Metro Police Department (LMPD), executing a no-knock warrant in pursuit of drugs, fatally shot Breonna Taylor. No drugs were found in her apartment and the primary suspect was already in custody at the time of the search. With no onsite paramedics, Taylor was given no medical attention for 20 minutes. Taylor’s death sparked national demands for police reform. By June 2020, the Louisville Metro Council passed “Breonna’s Law,” banning no-knock warrants in the city. By February 2021, the state legislature passed Kentucky Senate Bill 4 (SB4), which restricts the time frame in which no-knock warrants can be executed and limits the circumstances allowing for an unannounced entry. Additionally, emergency medical technicians are required to be on-site when any no-knock warrant is executed.

To unpack public perceptions on no-knock warrants, we conducted an original web survey of 625 American citizens on June 24-26 via Qualtrics, using quota sampling.

Respondents were first asked to evaluate the statement, “I support no-knock warrants.”

Overall, a plurality of total respondents (43.2 percent) said they disagree with the statement. Although we see greater opposition among Democrat and Black respondents compared to Republican and white counterparts, we see a plurality in opposition across groups. Meanwhile, among most groups, those supportive and those indifferent were of equal size. Such indifference could be attributed respondents preferring more context before accepting or rejecting a common police tactic. 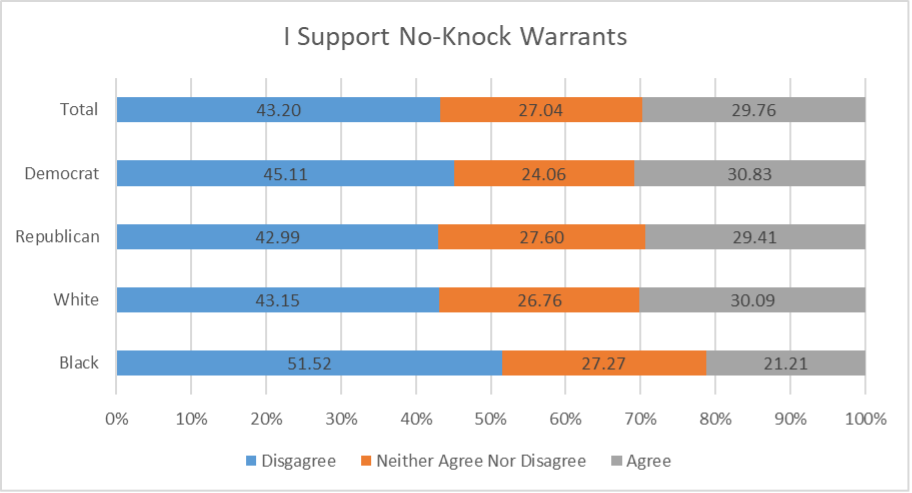 Next, respondents were randomly assigned one of six prompts to evaluate.

Version 6:  No-knock warrants are justifiable in cases like Breonna Taylor’s.

Overall, we find a tacit acknowledgement for when no-knock warrants may be appropriate in limited circumstances, but also that high-profile tragedies, like Breonna Taylor’s, decrease public support for police tactics. For example, Louisville Metro Council’s decision to ban no-knock warrants was unanimous after the tactic resulted in the death of a local civilian. The survey results have implications for future police reform. As tragedies due to no-knock warrants continue to occur, civilians fear the possibility of similar incidents in their own communities. 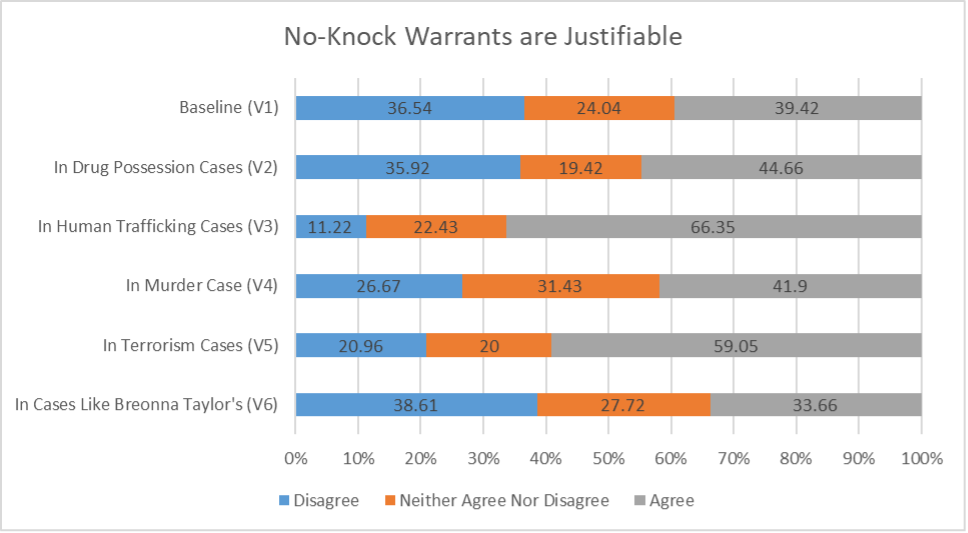 Since Taylor’s death, more than 84 proposals across 33 states have been introduced that would restrict or ban no-knock warrants. Kentucky’s SB4 is one such proposal. We provided respondents information about SB4, then asked, “Do you think this is an effective measure of reducing fatal encounters when police execute no-knock warrants?” We found 64.48 percent of total respondents answered “yes,” with similar rates among Democrats (64.66 percent) and Republicans (63.35 percent). Such broad bipartisan support suggests that similar reform to reduce fatal encounters with police is possible in other states.

Timothy S. Rich is an associate professor of political science at Western Kentucky University and director of the International Public Opinion Lab (IPOL). His research focuses on public opinion and electoral politics.

Funding for this survey was provided by the Mahurin Honors College at Western Kentucky University.