What if the US taxed fossil fuels and gave a check to every American? Turns out, most of the public is into that idea

In 1992 at the Rio de Janeiro United Nations Conference on Environment and Development (UNCED), the principle of common but differentiated responsibilities was codified into international environmental law. This principle holds that each country is responsible for taking actions to protect the environment, but those actions are differentiated based on its economic ability to contribute. Additionally, the countries with more developed economies (MDCs) tend to have more cumulative CO2 emissions because they have already developed their economies with fossil fuels. Globally, 1.5 trillion tons of greenhouse gasses have been emitted since 1751, and the U.S. is responsible for 400 billion tons of cumulative emissions.

Today, the United States produces the second most carbon dioxide emissions, behind China. According to the Environmental Protection Agency, the U.S. emitted 6.6 billion tons of carbon dioxide equivalents in 2019. The majority of greenhouse gas emissions come from two sectors: transportation (29 percent) and electricity (25 percent). With June’s record heat waves across the Pacific Northwest caused by climate change, it is clear the U.S. must start implementing solutions such as carbon pricing in order to reduce yearly emissions.

The Energy Innovation and Carbon Dividend Act of 2021 is a bill currently being considered by Congress. The legislation would add a fee on fossil fuels which will increase over time and reduce demand for fossil fuels. The revenue collected from the carbon fee is first used to pay for the administration of the program and the rest is distributed to every American equally as a check. Rather than collecting the fee to fund government programs/initiatives, the money is divided among Americans and a check is sent to them each month. Most Americans would receive more money than they spent on the increased costs of fossil fuels, especially low-income Americans.

Historically, there has been bipartisan support for a carbon fee and dividend program. The Climate Leadership Council makes the case for a conservative climate solution which is a carbon dividends plan. The Citizens’ Climate Lobby is a bipartisan nonprofit that has their own carbon dividends plan. In January 2019, H.R.763 was introduced by two Florida representatives Democrat Ted Deutch and Republican Francis Rooney; this legislation would add a fee on carbon emissions and create the Carbon Dividend Trust Fund. The bill was referred to many committees, but it was never voted on.

Both the bills from 2019 and from 2021 are extremely similar, and they define individuals eligible for the dividend as any citizen or lawful resident with a social security number or taxpayer identification number regardless of income. Despite the similarities, both bills seem to be on similar paths where the new bill will also die in committee. So we wanted to test if there would be more support for the bill if the revenue collected from a new fee on carbon were split among Americans and residents making less than $400,000 a year.

To test public opinion on who should be eligible recipients for the dividends, we conducted an online web survey administered by Qualtrics, recruiting 625 American respondents via quota sampling on June 22-24. After a series of demographic and attitudinal questions, respondents received the following prompt:

Congress is currently considering the Energy Innovation and Carbon Dividend Act, which would add a tax on fossil fuels in order to reduce emissions by 45 percent by 2030. The taxes collected would then be divided and every American will receive a check each month as a carbon cash payback.
Please ‘drag and drop’ to rank order your preferences on how to divide these payments, with your first preference at the top (1) to your least preferred at the bottom (5).

– Equally among all American citizens and residents regardless of income (1)

– Equally among American citizens and residents only making less than $400,000 a year (2)

– Equally among American citizens and residents making less than $400,000 a year with extra funding available to those who are experiencing the impacts of climate change or environmental injustice (those affected by forest fires, sea level rise, drought and aridity, living near landfills or in polluted areas, etc) (3)

The figure below breaks down first preferences overall and by partisan identification. As previous data shows, there is bipartisan support for the bill, but how to divide the revenue collected is less clear. Less than a tenth of respondents overall (9.44 percent) stated that they did not support the act, while the most popular option overall as well as among both Democrats and Republicans was Option 2, providing payments for those under $400,000 a year. However, this received a third or less of the first preference ranking in each group (Overall: 28.64 percent; Democrats: 29.7 percent; Republicans: 32.13 percent). Options 1 and 4 also each received between 21.43 percent and 27.07 percent of first preference rankings, with little limited variation by partisan identification. 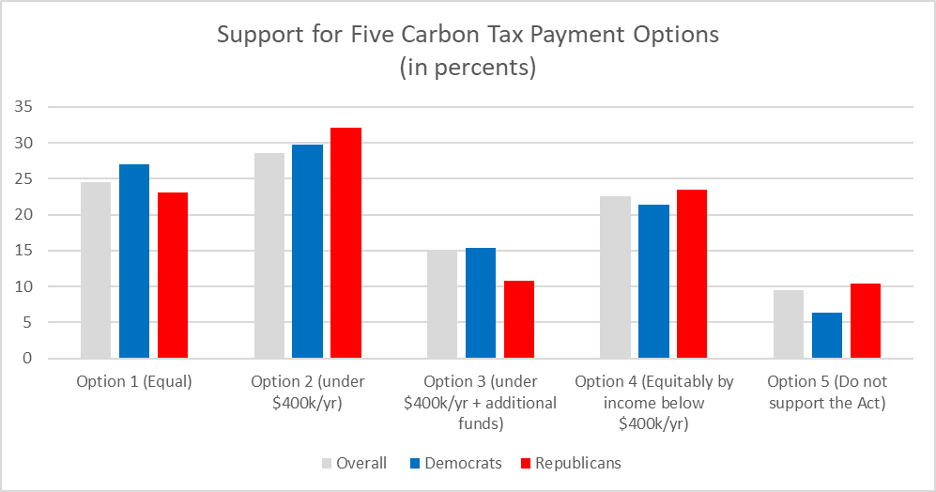 To identify whether there was a greater consensus beyond first preferences, we weighted the percentage of respondents per ranking, so that first preference rankings were weighted 5 points down to a point for fifth preference. Thus, higher point totals should indicate greater overall support of an option, within the rankings. We found little difference between any of the four options. Option 2 (under $400k/yr) had the most support both overall and when broken down by partisan identification. Option 3, which fared poorly in first preference ranking, actually comes in second in point totals, indicating that it was commonly chosen as a second or third choice. 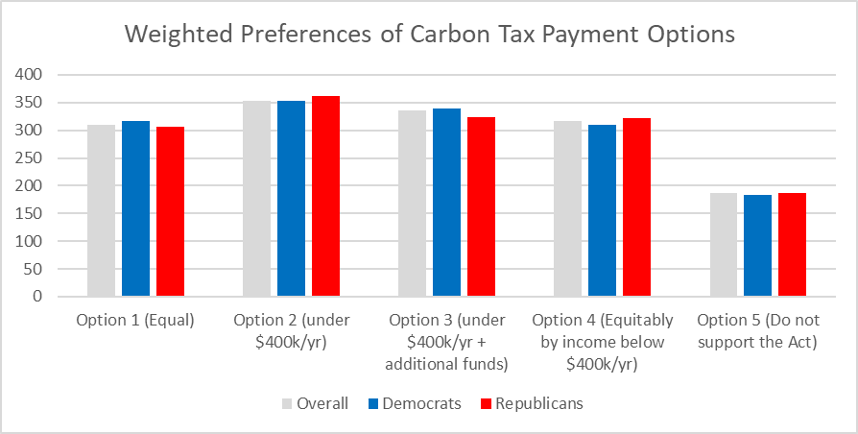 From this data, it is unclear which route policy makers should pursue, but it is clear there is support for a more equitable division of the fee so it supports middle- and lower- class Americans. Even with equal bipartisan support for options 2, 3, and 4, it will be difficult for Congress to agree on how to distribute the dividend. This could mean we will continue to see inaction from Congress on this bill despite its importance and general support. However, if the bill were changed as discussed above then popular support and recent events may make it a priority for Congress.

Kerby Gilstrap is an honors undergraduate at Western Kentucky University where she studies International Affairs, Arabic, and Sustainable Development.

Timothy S. Rich is an Associate Professor of Political Science at Western Kentucky University and Director of the International Public Opinion Lab (IPOL).

Funding for this survey was provided by the Mahurin Honors College at Western Kentucky University.