Portraits from the Capitol steps: January 6, 2021

When an insurrection invaded the Capitol on January 6, filmmaker Horacio Marquínez was there.

Horacio, born in Panama, came to the United States for graduate school 30 years ago to pursue a career as a filmmaker. Today he is a US citizen and accomplished cinematographer.

He and fellow filmmaker, Kirill Mylstev, who immigrated from Russia four years ago to work as editor and director,  were in the midst of filming their project, 2020 Americans, a documentary in the form of a road trip they took across the country last year to get to know people who lived across America during the pandemic.

I have known Horacio for 15 years, and I have long been in awe of the magic of his camera and the intimacy it can create, even momentarily, between photographer and subject.

Last week, with the January 6 anniversary approaching, I asked what he recalls, a year later. His answer was “the people and the contagion of their intense emotions all day”. In this lightly edited transcript below, he remembered that day with me, reflected on the people he met and looked forward into the new year.

How did you end up on the steps of the Capitol January 6?

It was part of a road trip my friend Kirill and I started across America to film a documentary. We felt that something important was happening in the United States and, as filmmakers, we couldn’t just sit still in our houses, knowing that we have cameras. We needed to be outside, among the people, to connect with people, photograph them, and to capture this moment for history.

We were in the middle of making the film and rumors were getting louder and louder that people were going to gather in the Capitol to protest the election on January 6. We wanted to be a part of it, to see it through our own lens, and to document the day.

What did you see, and maybe the better question for you – who did you see?

On the night of the fifth there was a gathering downtown in Washington, D.C. It was raining, it was wet and cold, and it was kind of a small crowd. It really looked like a street party and people were chanting without masks. In any election, in any part of the world, some people always feel the election was stolen. So it did not feel strange to me that people were chanting “stop the steal.”

More people started arriving the morning of January 6. It again felt like a big party. There were suddenly thousands of people around the Washington Monument, where there were two stages set up for political rallies. The majority of people I saw were white, but there was also a strong presence of people from various racial and cultural backgrounds. 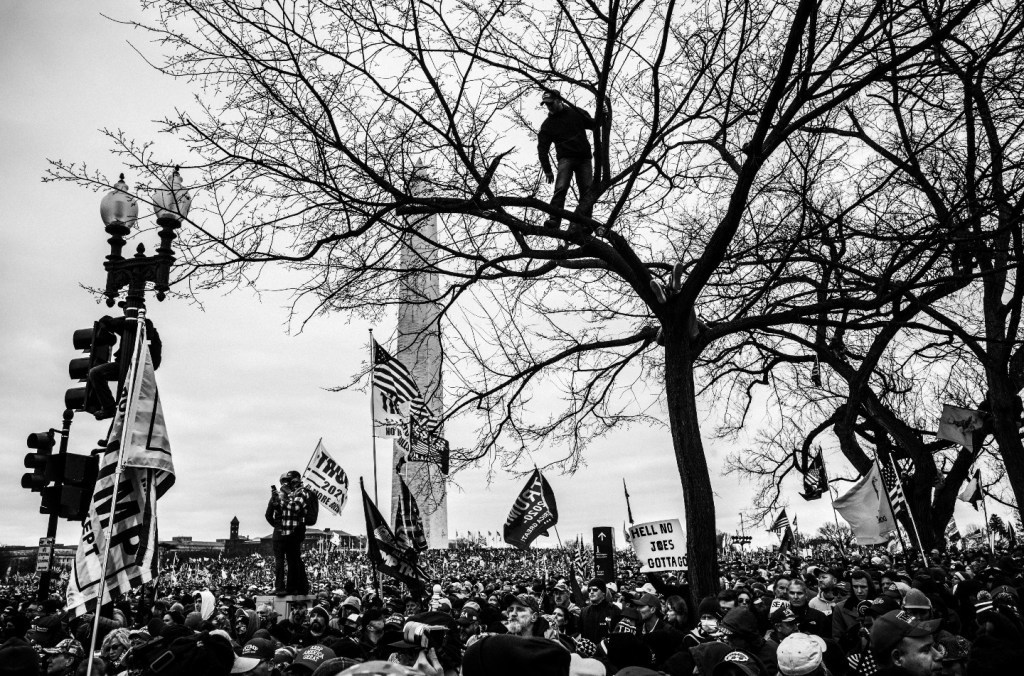 There were a lot of people surrounding the Monument and I began to watch how they were interacting. I saw when emotions and conversations started getting more heated in the afternoon, even among protesters themselves.

At some point in the afternoon, after the speeches, the crowd started walking towards the Capitol.

A lot of people were walking away, you know like when a big concert ends. I assumed that it was over. Yet I got the feeling to follow people who were walking towards the Capitol. The sirens I heard were a signal that something was happening.

As I approached the Capitol, again, we were surrounded by thousands of people. Quickly, chaos ensued. I remember hearing one person even say, “We’re not here for this.” But the energy was strong and moving forward. People were even praying.

Contrasting portraits surprised me: people in full Army gear, people dressed in American flags, and people praying sometimes just feet away from each other, as they were climbing the steps and walls of the Capitol. 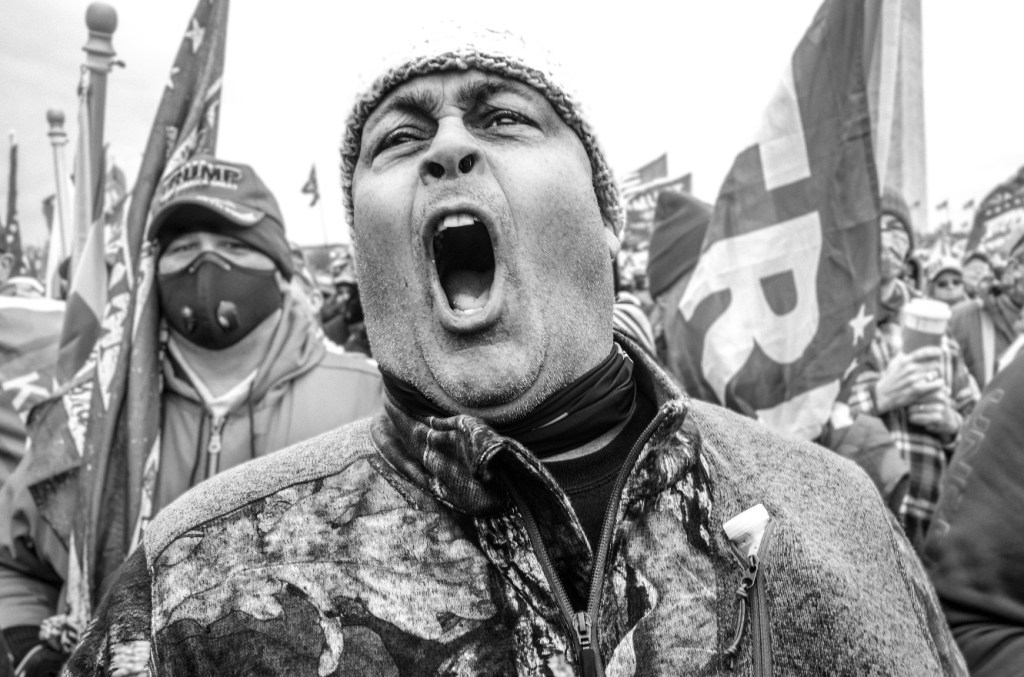 Which portraits stand out the most as a reminiscence of that day?

I found a man leaning against the Washington Monument. He turned around and looked at me, but his mind was somewhere else. There were tears coming out of his eyes. I felt for him.

I asked him what was happening, what he was feeling at that moment.

He said he was honestly feeling that he was losing his America (he was a war veteran) or the America that he believed belonged to him.

And the word he used was betrayed.

But what gave me chills was when he said he wished he had a gun right now so he could go and kill people, the people who stole the election from him and all of us.

That shocked me. What made it eerie is that he was not screaming or running into the crowd; he appeared calm. 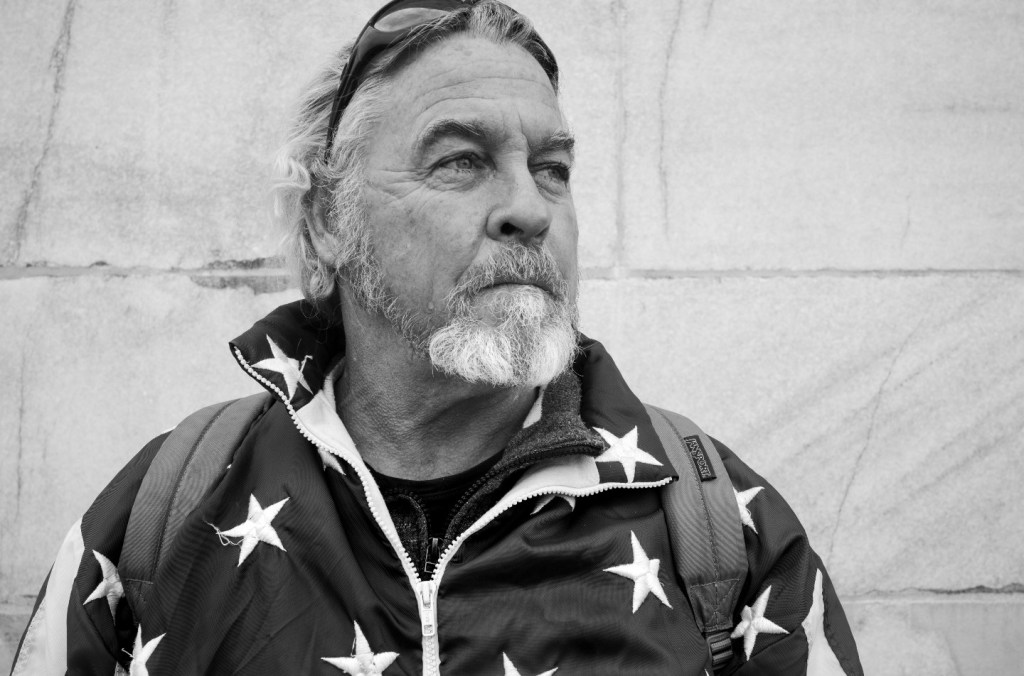 Then there was another shocking moment when I was on the steps of the Capitol and suddenly people moved to make an opening right in front of me to carry a guy down who was clearly distressed and gasping for air.

I immediately felt the need to keep an eye out for an escape route. Anything could happen in that moment. 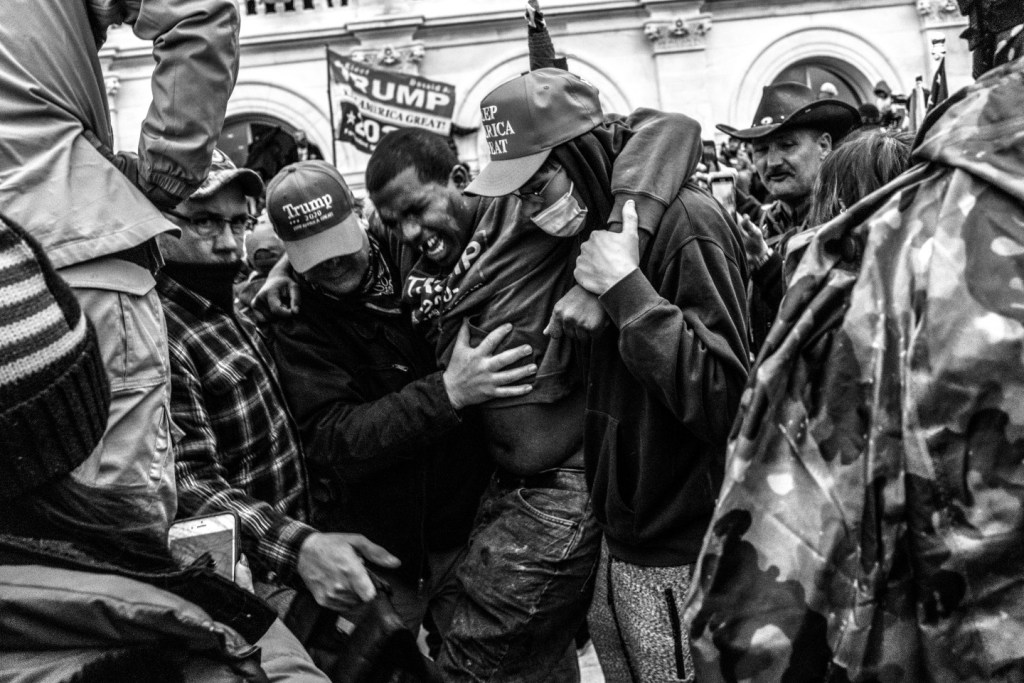 What other pictures stand out for you, a year later?

There are so many – but here are a few that have resonated with me.

A group of what I assume were Roman Catholics, carrying a figure of the Virgin Mary like it was a torch. It was a dialogue between religion and politics right in front of me.

There was a man at a distance who had climbed on a statue. He knew I was taking pictures of him. We started a dialogue, just with gestures. I was looking for a moment of connection. It was as if he knew exactly what I was looking for. 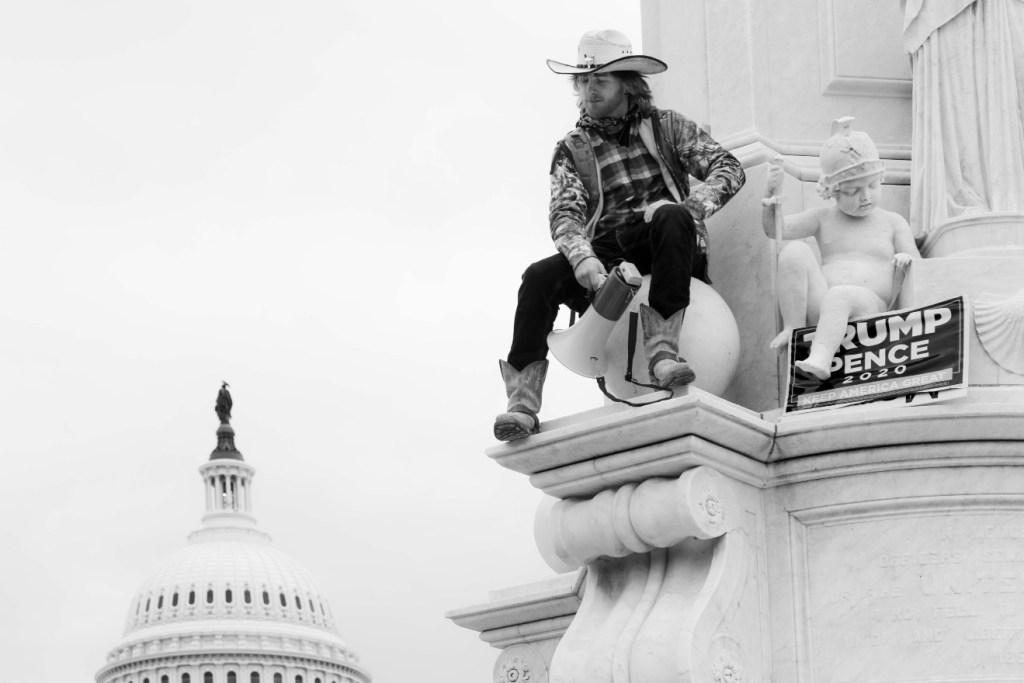 Then there was a blonde woman, an Asian couple, and a young man in a bullet proof vest, faces I remember, all who appeared distraught and in pain after experiencing tear gas on the steps of the Capitol.

This moment brought me back to my early 20’s in Panama during the invasion – the chaos, the tear gas, the possibility of complete destruction, I knew right there that I was participating in history and something that will be remembered for long time. I needed to continue photographing even with tears in my eyes and gasping for air. 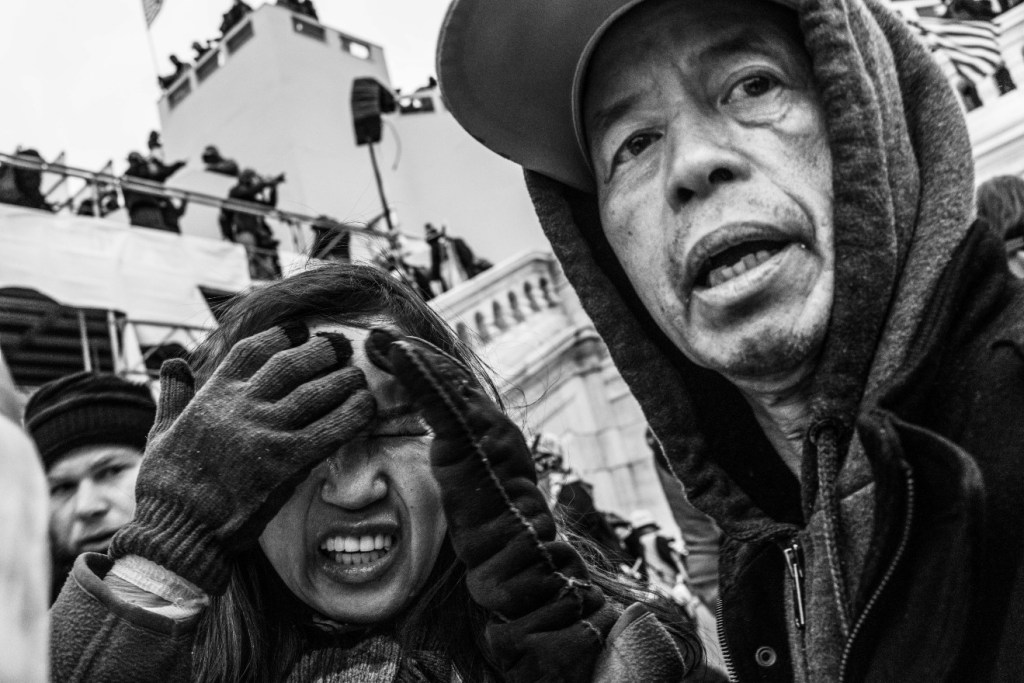 After your experience on January 6 and all these months connecting and filming across the country what are you taking forward into the new year ?

What I found on January 6 and on my eight month journey on the road with Kirill, listening to people in their towns, in their homes –  in the most challenging circumstances, even after grief and loss, even with the impact of COVID continuing, was that Americans are in essence optimistic and hopeful. I learned that the media tailors messages to one side or the other to keep people coming back. But if we stop and listen to one another – the individuals, not the masses – just listen and not argue, and if we get out of our bubbles and pay attention to other voices, we can learn about each other’s perspectives and motivations. It’s not about necessarily accepting or concurring with their views, but just listening to them so we might learn a thing or two.

What I learned during our trip is that America is constantly in the making and that America keeps revising itself. After many, many hours of interviews, after asking strangers on the streets about what they wanted in their lives the most, I learned to bite my tongue and listen. I learned so much about people in America.

Robin Stern, Ph.D. is the co-founder and associate director of the Yale Center for Emotional Intelligence, a psychoanalyst in private practice and the author of The Gaslight Effect.

Horacio Marquínez is a cinematographer, photographer, and director. He’s worked on over 30 feature films and documentaries. You can follow him on Instagram @hmarquinez and @2020Americans. www.horaciodp.com