Haunting photos of America’s conflict between industry and nature

Photographer Richard Sexton is drawn to environments that are not destined to last.

Many generations have lived off the natural environment of the lower Mississippi River, but heavy industry has concentrated in the area over the past century. Sexton’s latest photography book and exhibition in The Historic New Orleans Collection, “Enigmatic Stream: Industrial Landscapes of the Lower Mississippi River,” documents the heavy industry of the region beside what remains of its natural environment.

I asked Sexton about his experience photographing the industrial facilities along the river’s banks and what he learned from capturing 90 black-and-white images that juxtapose the manmade and the natural.

The Mississippi River has supported humans for centuries. What changed in the past century? 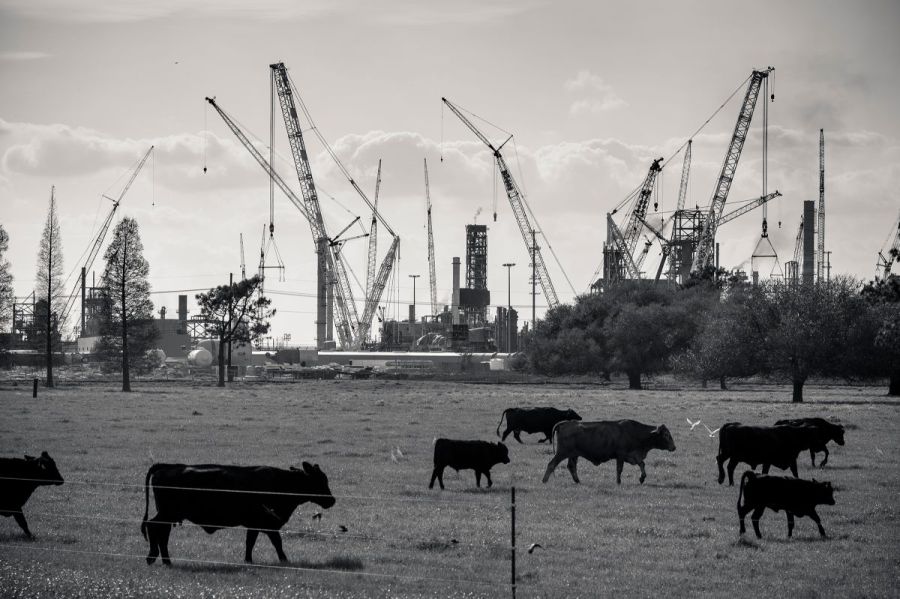 You say that “many of these sites resemble collaborations between Rube Goldberg and Dr. Frankenstein.” That’s a pretty wacky combination.

This analogy is intended to conjure improvised and haphazardly designed structures, which is how many of these plants look. Because heavy industry is driven strictly by function, a lot of machinery is allowed to show. None of its complexity is disguised or hidden. There is no aesthetic component to the design. Whatever it needs to look like to accomplish its function, that’s what you get.

Robert Pirsig in his iconic book “Zen and the Art of Motorcycle Maintenance” discussed two ways we relate to technology — surface appearance and underlying form. Of course, he used the motorcycle as an example of the two. Its surface appearance depicts a strong and agile form of personal mobility. It looks fast and adventurous. But, beneath that shell are many small, finicky parts that require persistent tinkering. The heavy industry of the river road is all underlying form with no shell. It’s naked machinery. 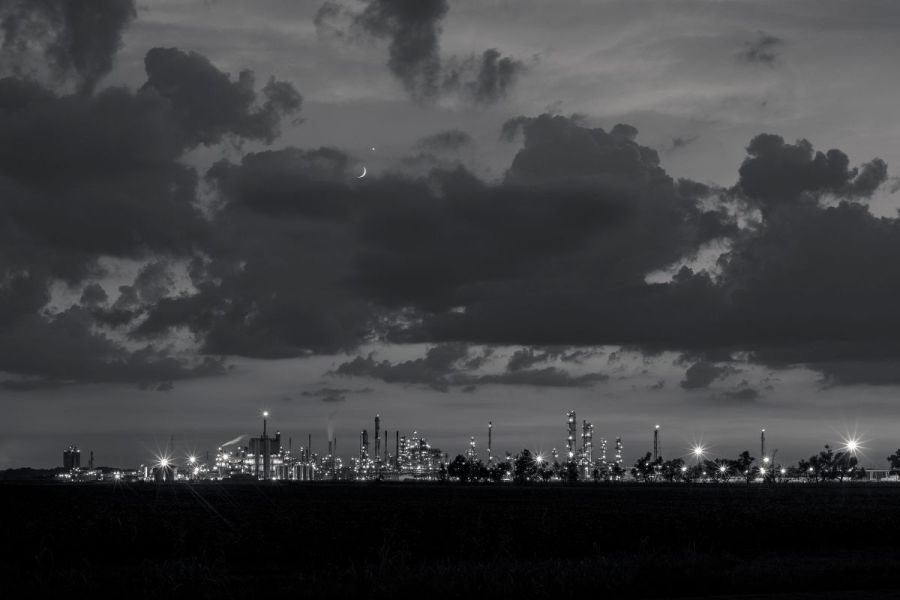 How did you think about this idea in relationship to your photography?

The naked machinery is more interesting visually because you can see it clearly in all its complexity. And it’s enigmatic, mysterious. To the layperson it can be difficult to understand the function of the machine in front of you. It has no surface appearance to suggest what it is or to disguise what it isn’t. 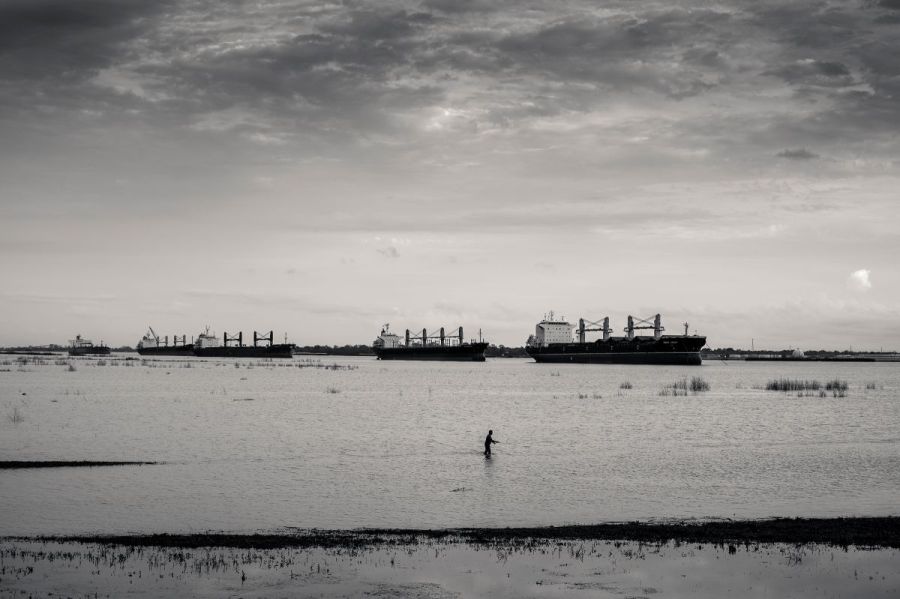 Did you talk to a lot of people along the river during your photographic odyssey?

I deliberately chose not to try to meet or interact on a personal or social level with any of the folks who live near or work in the industrial sites. I wanted to be on the outside looking in, which is the same perspective I maintained with the heavy industry.

The people in the photographs in “Enigmatic Stream” tend to be small within the frame and they seem to be casually getting on with their lives with little regard for the heavy industry around them. Everything looks normal and nonchalant except for the context.

Why did you decide to shoot all of the photographs in black and white?

How have people reacted to your images?

There’s the subject matter of the photographs, which has received a varied, or mixed, reaction. I want each viewer to form their own opinion of this subject. Our societal views toward heavy industry are in transition. The risk versus reward equation has suddenly changed because the risk has become so great that it’s now perceived as an existential threat.

What was your biggest surprise?

The major thing in the “surprise” category would be not so much a surprise, as a revelation. As I began to explore this subject in greater depth and as I thought about how the heavy industry of the lower river impacts our lives, I came to realize I don’t think we win the climate change battle. It’s not that we won’t do anything about it. It’s that we won’t be able to do enough, fast enough, to stop a train that left the station a long time ago. As a species, we are not destined to survive without tools and technology. We can no longer exist within the natural environment from which we evolved.

Bear in mind, I’m not a climate scientist, or a hydrologist, or a chemical or civil engineer. I’m speaking strictly as someone who has documented a very small piece of the planet, which has been radically altered by human presence. 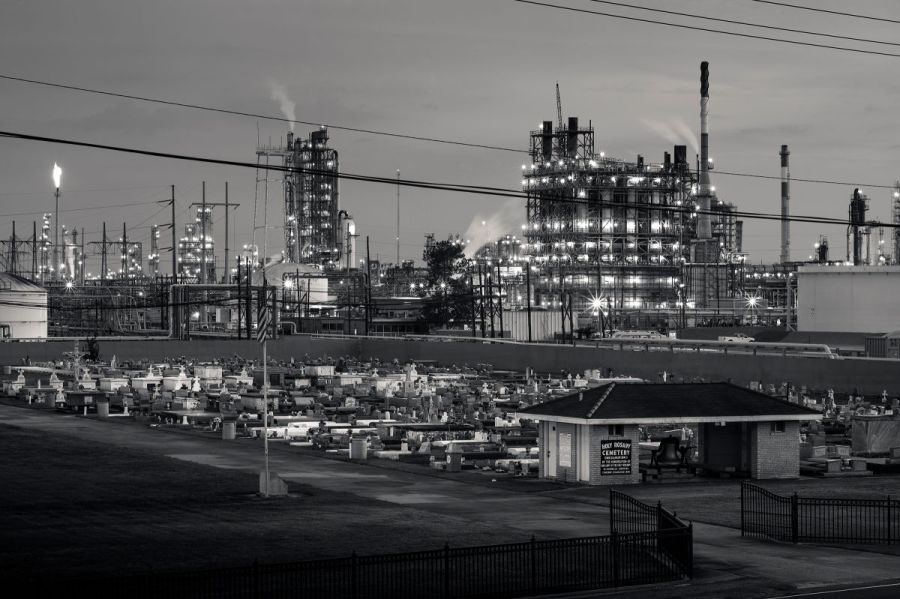 How did you feel shooting these photographs? What was your emotional response to this imagery?

My emotional response is, I believe, similar to the reaction of the vast majority of people who will see this exhibit or who will buy the book. They will feel conflicted.

There must have been some challenges on this trip.

The powers that be in the local communities don’t want photographs taken of the heavy industry there and this is particularly true of oil refineries and petrochemical plants. If they could prevent any photographs from being made, including ones of the public view of the facility, they would. Any time anyone shows up with a camera, it’s not a good thing. So, I was harassed by plant security in some instances, the sheriff’s department in others. I even got a call from the FBI. (Plant security had turned me in as a possible terrorist since I was photographing “vital infrastructure.”)

One of the great planning achievements of the 19th century was the separation of industrial from residential land use. And this is also the reason heavy industry is averse to photography. Your friendly neighborhood butcher doesn’t want you touring the slaughterhouse either. If we can only see the entire picture, we can make better decisions about the world we live in.

This interview has been edited for length and clarity.