The International Space Station (ISS) has suffered some damage after it was hit with a small piece of space junk, according to NASA and the Canadian Space Agency (CSA). 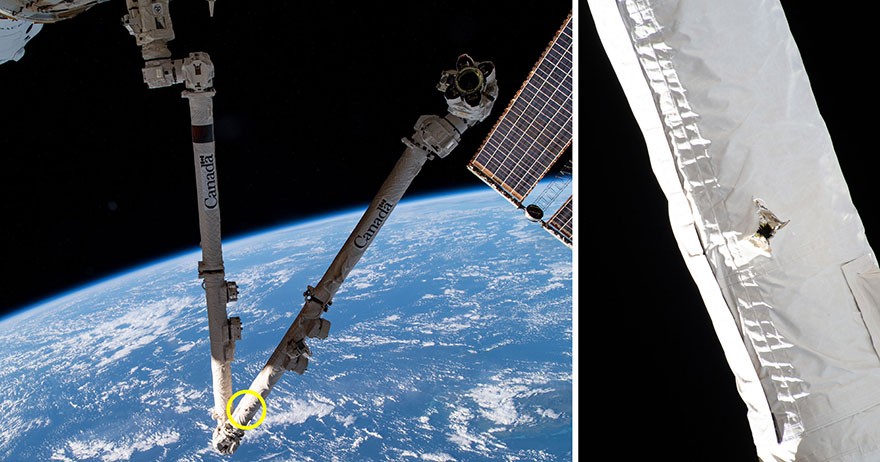 A small section of a 60-foot robotic arm attached to the outside of the ISS was punctured by space debris and left with a hole about 5 millimeters in diameter.

The damage was first noticed during a routine inspection on May 12.

“Experts from the Canadian Space Agency (CSA) and NASA worked together to take detailed images of the area and assess the impact, which occurred on one of Canadarm2’s boom segments,” CSA officials said in a recent blog post.

“Despite the impact, results of the ongoing analysis indicate that the arm’s performance remains unaffected. The damage is limited to a small section of the arm boom and thermal blanket,” CSA said.

“Canadarm2 is continuing to conduct its planned operations,” the agency said.

The incident shows the threat posed by debris in low-Earth orbit as the space around Earth becomes increasingly crowded with satellites, used rocket parts and other materials left behind by humans.

More than 27,000 pieces of space junk are tracked by the Department of Defense’s global Space Surveillance Network (SSN) sensors to avoid collisions, according to NASA.

NASA says there are approximately 23,000 pieces of debris larger than a softball that can orbit the Earth at speeds up to 17,500 miles per hour.

FOR ITS NEXT TRICK, NASA’S HELICOPTER FLEW SIDEWAYS ON MARS