A pilot project to install solar panel canopies over sections of an existing canal in California’s San Joaquin Valley is set to kick off in the fall, as researchers posit using canals for solar infrastructure can both save water and produce renewable energy. 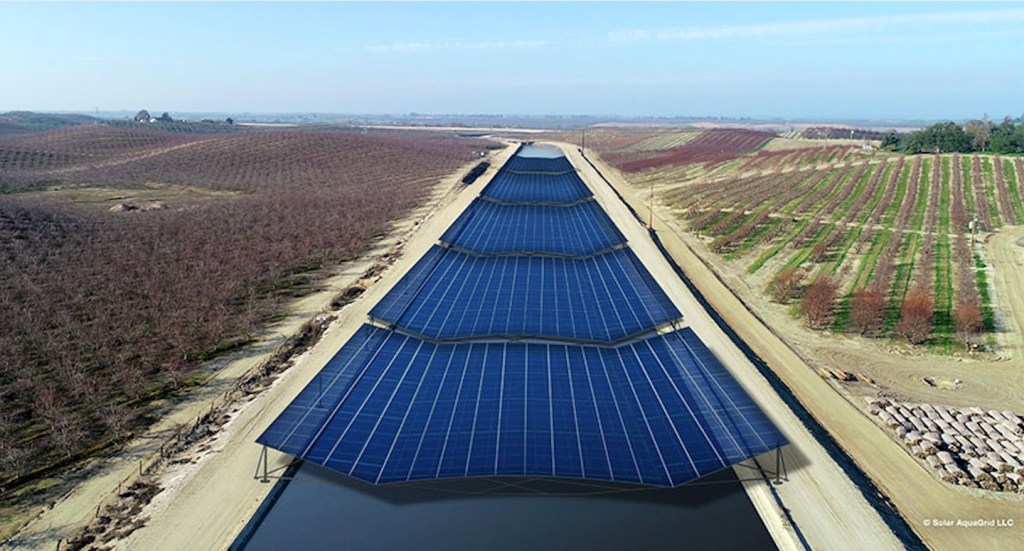 The Turlock Irrigation District (TID), a utility company in Turlock, Calif., is partnering with the state’s Department of Water Resources (DWR), Solar AquaGrid and The University of California, Merced on the project dubbed “Project Nexus.”

The project involves covering several open water canal segments in Stanislaus County with solar panels to test whether the concept could result in a reduction of water evaporation, improve water quality through reduced vegetative growth and generate renewable electricity in a state aiming to decarbonize by 2030.

The $20 million project is being funded by the state of California. Ground breaking is expected sometime in the fall and completion in 2024 at multiple locations.

TID’s board approved piloting the “first-in-the-nation” solar panel over canal development on Tuesday.

The project stemmed from a study published by the University of California, Merced and UC Santa Cruz which found covering 4,000 miles of the state’s water canals could cut water evaporation by as much as 82 percent and save about 63 billion gallons of water annually, about the same amount required to irrigate 50,000 acres of farmland.

Researchers also showed covering the canals with solar installations could generate about sixth of the state’s current installed energy capacity, about half the projected new capacity needed to meet California’s goal of cutting greenhouse gas emissions by 40 percent by 2030.

“Using water canals for solar infrastructure conserves water while producing renewable electricity and avoids converting large tracts of land to solar development,” Brandi McKuin, a researcher behind the study, said in a statement.

“The cooler microclimate next to the canal mitigates panel heating, which enhances PV efficiency, and shade from the panels mitigates aquatic weed growth which is a major maintenance issue,” McKuin said.

The concept, if successful and scaled up, could potentially help California reach its ambitious climate goals and provide water and energy solutions to a state that has long suffered from severe drought.

Researchers note, however, there are challenges, including the cost of solar infrastructure relative to energy output, the need to access canals for maintenance and overall and delivery of electricity to a useful load.