Best rainbows on Earth are in Hawaii, scientist says

Rainbows have great cultural significance in Hawaii, with many terms and phrases for different types of rainbows in the Hawaiian language. In a new paper published in the Bulletin of the American Meteorological Society, a scientist makes the case for why Hawaii has the best rainbows on Earth.

“In Hawaiian mythology the rainbow is a symbol of transformation and a pathway between dimensions, as it is in many cultures around the world, and those who can freely travel between the upper world and the lower reaches live like gods among humans, enjoying earthly prosperity and abundance,” writes paper author Steven Businger, who is a professor at the University of Hawai‘i Mānoa School of Ocean and Earth Science and Technology.

The Hawaiian words for rainbows describe different manifestations of rainbows that are possible. “There are words for Earth-clinging rainbows (uakoko), standing rainbow shafts (kāhili), barely visible rainbows (punakea), and moonbows (ānuenue kau pō), among others. In Hawaiian mythology the rainbow is a symbol of transformation and a pathway between Earth and Heaven, as it is in many cultures around the world,” says Businger in a press release.

The science behind rainbows is a little more complex than it may seem. For example, a rainbow’s reflection is not technically a true reflection. One insight, thanks to Decartes, is that each observer sees their own rainbow made up of light rays from a unique set of raindrops that happen to be located at the correct angle from the viewer’s head, writes Businger. So a reflection is light passing through different raindrops. 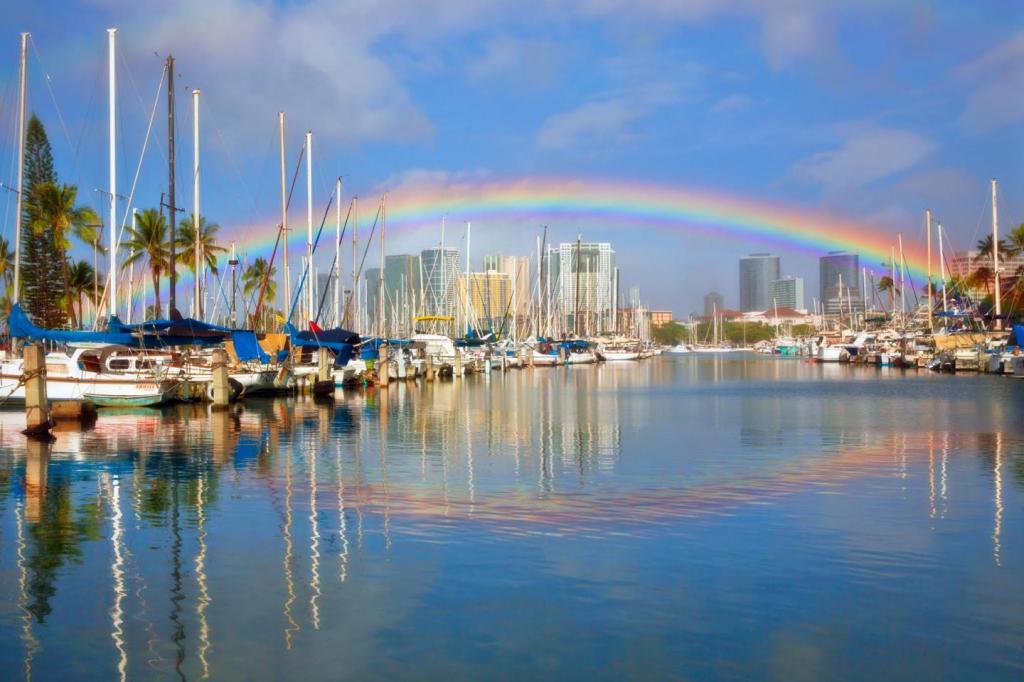 Rainbow over Honolulu Harbor with what appears to be its reflection. However, the reflected bow is not what it appears to be. Photo credit: Minghue Chen

Another phenomenon is supernumerary bows where faint color bows are visible within the primary bow or outside the secondary bow. These are the result of diffraction of sunlight. 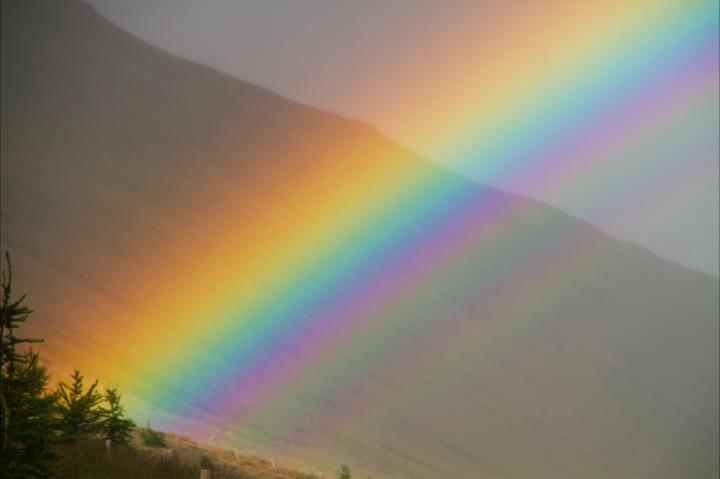 An example of supernumerary bows beneath the primary bow. Photo credit: Matt Champlin

Businger’s explanation for why Hawaii is the best for rainbows has to do with where it’s located and the trade winds it gets. The islands are also mountainous, which helps create the right weather. The islands get showers with clear skies in between, making it perfect for rainbow viewing.

“At night a warm sea surface heats the atmosphere from below, while radiation to space cools cloud tops, resulting in deeper rain showers in the morning that produce rainbows in time for breakfast,” says Businger in the press release.

Another factor is daytime heating that contributes to island level circulations of air. The air is also free from a lot of dust, pollen and pollution. This means there is less scattering of light because of particles in the air and the sunlight contains the full spectrum of light even at low angles, according to the paper.

So if you are interested in chasing rainbows, you can head to Hawaii and pay attention to the weather satellites. The sun’s angle is also important. Businger suggests an angle of no higher than 38 degrees above the horizon and not too close to the horizon. Other than that, Businger writes, “Great care must be taken while driving not to be too distracted by the sky.”

1 IN 4 AMERICANS REFUSE TO GET COVID-19 VACCINE: POLL