The global trade for shark meat is far greater compared to shark fins, and countries outside of Asia, including many EU member states, are key contributors, according to a new report released by WWF.

The study dispels a common myth that sharks are caught and traded mainly for their fins and only in Asia.

Spain is the world’s largest exporter of shark meat, Italy is the top importer and the EU accounts for over one-fifth of global trade in shark meat.

Although shark fins tend to attract greater public and media attention, their global trade in terms of both value and volume pales in comparison to shark and ray meat.

Shark meat can sell for as low as $0.1 per kg versus shark fins which could fetch more than $100 for a kg. Yet the report puts the total value of shark and ray meat trade at $2.6 billion compared to $1.5 billion for shark fins. 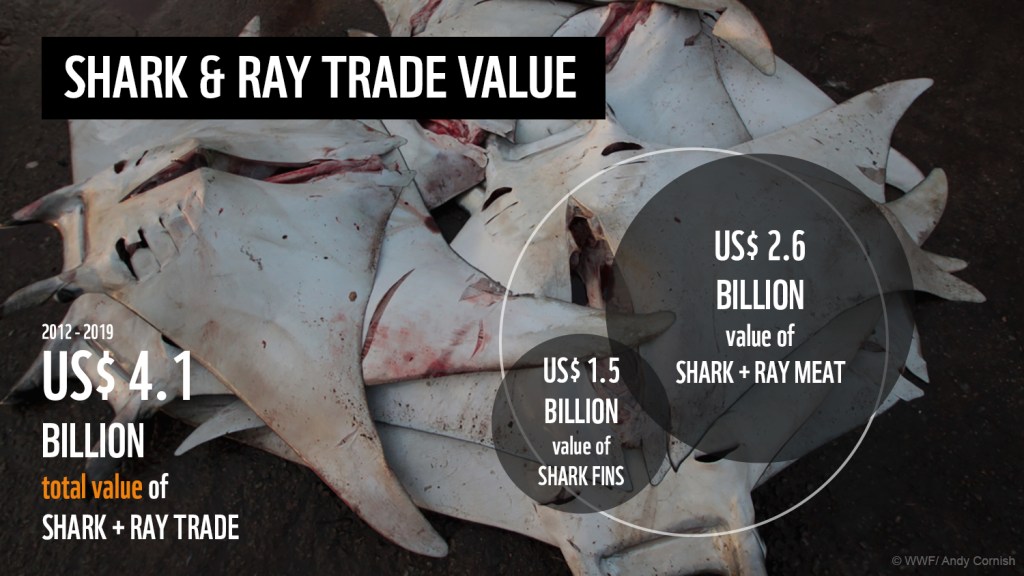 “Demand for shark fin is well-known as a driver for the overexploitation of sharks and rays, and fingers point at Asia, where shark fin soup consumption is highest,” says Andy Cornish, WWF’s lead for its global shark and ray conservation program. “This new report spotlights a far larger global trade in shark and ray meat that many are unaware of.”

“These results show that trade in shark meat can be a significant conservation concern, which means that focusing just on the trade in shark fins ignores a major part of the problem,” adds David Shiffman, a marine biologist studying sharks at Arizona State University.

Overfishing puts sharks and rays at risk of extinction

According to the latest assessment by the International Union for the Conservation of Nature (IUCN), 36 percent of all shark and ray species are threatened with extinction.

Overfishing, including both the targeted hunting and the incidental capture — or bycatch — of sharks and rays, is a key driver behind their rapidly depleting numbers.

Yet limited reporting on catch and landing numbers and opaque supply chains make it challenging to develop more sustainable fisheries and trade policies.

To address this data vacuum, WWF engaged a team of scientists to develop the first study of global shark and ray trade using graph theory, a mathematical tool for the analysis of networks and relationships.

Using data from the UN International Trade Statistics Database (UN COMTRADE), the researchers examined the volume and value of global trade for sharks and rays between 2012 and 2019, including the import and export relationships of over 250 traders.

The report provides a critical follow-up on figures released by the Food and Agriculture Organization (FAO) which looked at the global market for shark products between 2000 and 2011. 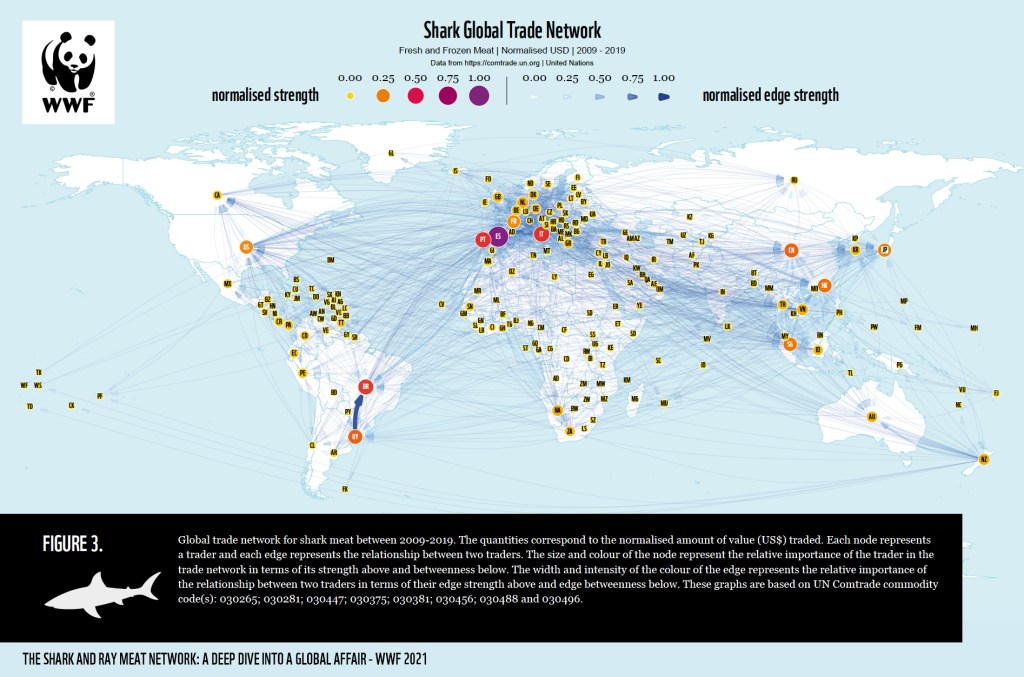 The report found that the role of China has declined, likely because of a high-profile campaign against shark finning, although the country is still the world’s sixth largest importer of shark meat in terms of volume, and among the top five exporters according to value.

Conversely, demand from Southeast and East Asia, including Singapore and Hong Kong, has increased. Singapore typically re-exports a significant part of its shark fin and meat imports, which explains why the city-state is listed as the world’s sixth biggest exporter of shark meat by value.

EU countries at the heart of global trade for shark meat 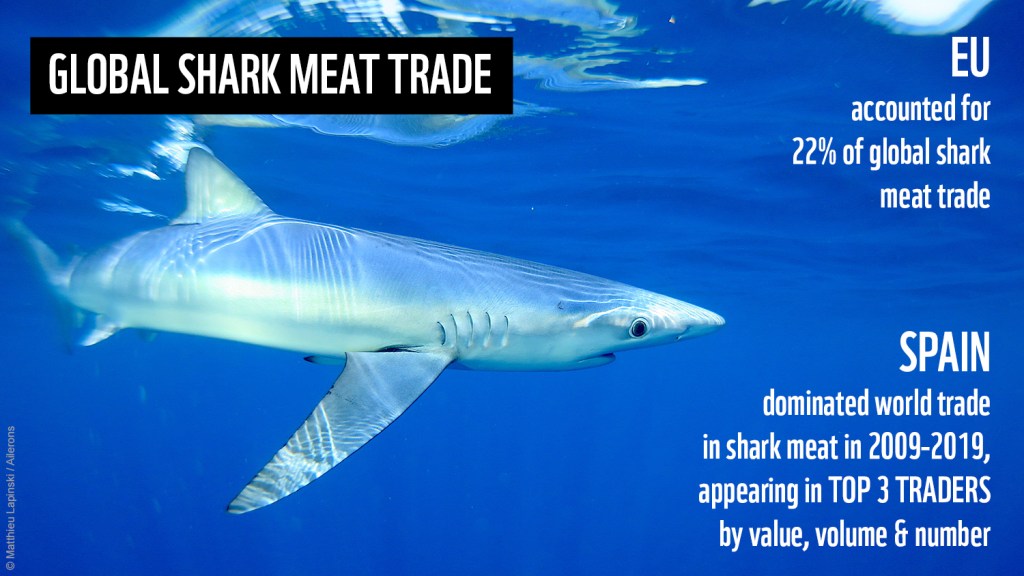 However, contrary to popular belief, the top three importers and exporters of shark meat in terms of both volume and value are located outside of Asia.

“Sharks and rays are migrating more when they are dead than alive, as their meat crosses over 200 borders, with some Mediterranean and European countries playing key roles as importers and exporters, as well as consumers,” says Simone Niedermueller of the WWF Mediterranean Marine Initiative and lead author of the report.

EU imports and exports account for 22 percent of global shark meat trade, and Spain is among the top three traders in terms of volume, value and number of trading partners.

“It’s common for public discourse on shark fisheries to focus disproportionately on the fisheries management or animal welfare practices of poor fishing nations, including subsistence fishers, on shark finning, and on demand from Asian markets for shark products,” says Catherine Macdonald, Lecturer in Marine Conservation Biology at the University of Miami.

“This research is important because it highlights the role of several high-income nations in shark exploitation, and reiterates that the biggest drivers of conservation issues are usually globalized supply chains and overconsumption in wealthy nations,” adds Hollie Booth, Sharks and Rays Advisor at the Wildlife Conservation Society (WCS) and researcher at the University of Oxford.

The vital role of ‘trade bridges’

Unlike traditional trade analysis, the use of graph theory has helped uncover the critical intermediary role of so-called ‘bridging traders’ who might not import or export a significant volume of shark or ray products but are key to ensuring their seamless flow in the global network. 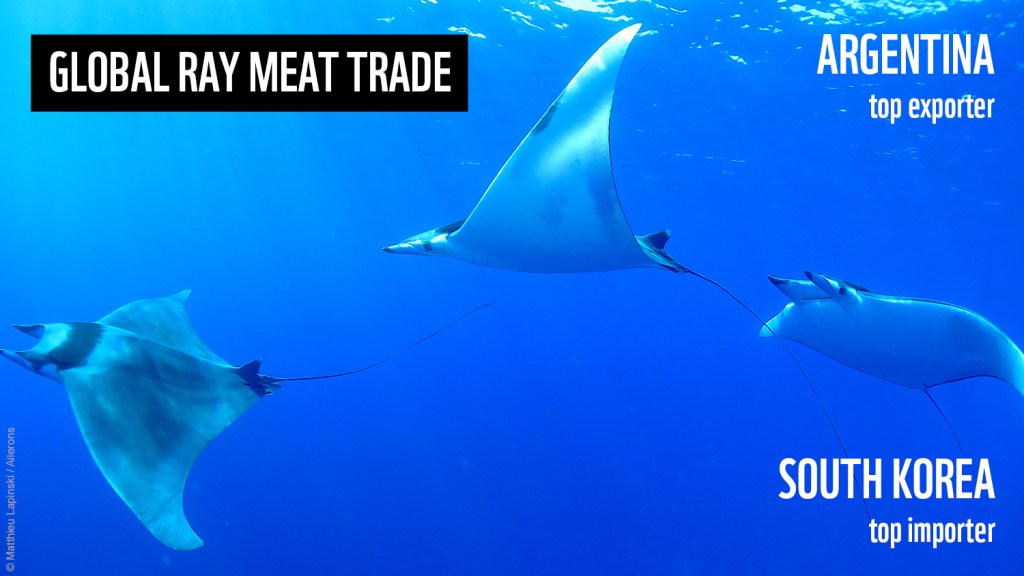 For example, although the high-volume movement of ray products involve traders outside of Europe, some of the most important “bridging partners” are located within the EU such as France, Spain and the Netherlands. 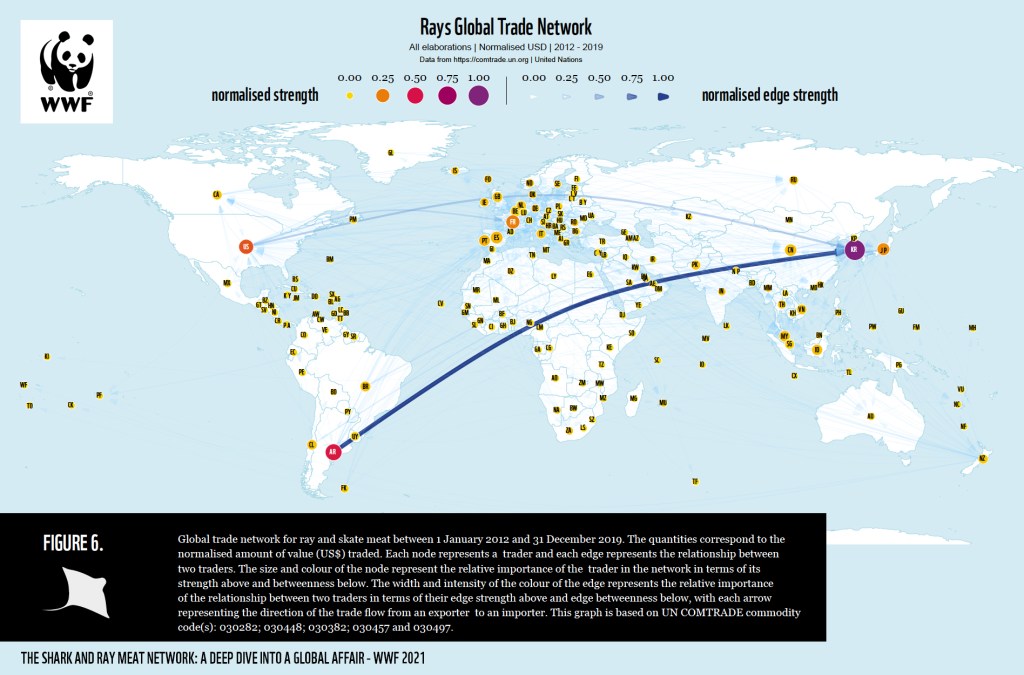 “While some countries are trading large volumes, others are important for the network and can be key as countries to focus controls and trade regulation on,” says Niedermueller. The report suggests that future regulatory measures should place an equal emphasis on top importers and exporters, as well as key “trading bridges.”

Mislabeling of shark and ray products

The research also touches on the misleading nature of product labels for shark and ray meat: Skate fillets are typically sold as “pollo de mar” (sea chicken) in Argentina, while South Africa labels shortfin mako shark meat as “skomoro” (ocean fillets). Shark meat is described as “saumonette” (little salmon) in France, as “palombo” in Italy and as “rock salmon” in the U.K.

Widespread seafood fraud, including the mislabeling of products or the laundering of illegally caught fish, are deceiving consumers into unintentionally eating species in danger of extinction.

Unless they depend on it for food security, the report recommends consumers to avoid buying shark or ray products that don’t come from traceable and sustainable sources. Few products currently on the market meet this criteria, especially as concerns over the trustworthiness of sustainable seafood certifications continue to grow.

It’s also important, however, to acknowledge and address the role shark meat plays in driving poverty alleviation and food security, especially in places where it’s the least expensive protein source due to the depletion of other overharvested fish stocks, adds Macdonald.

The need for species-level fisheries and trade data

Among its recommendations, the report highlights the need for more granular fisheries and trade data, including species-level reporting of both targeted catches and bycatch, species-level trade and tariff codes, and separate commodity codes for threatened species.

Such data should inform the creation of more sustainable fisheries policies, including measures such as catch limits, no-take zones or shark and ray sanctuaries. It should also be used to increase traceability and transparency in the wider seafood supply chain, and support efforts to combat illegal, unreported and unregulated (IUU) fishing.

Interestingly, the research reveals that secondary target catches of sharks and rays, which describe their deliberate capture along with primary target species like tuna, are mistakenly categorized as bycatch which tends to receive less policy attention.

Bycatch should be differentiated from primary and secondary target catches, and both the targeted and incidental capture of sharks and rays need to be mitigated to tackle overfishing.

While conditions differ from fishery to fishery, permanent or temporary bans on fishing in areas with significant shark and ray presence and the adaptation of destructive fishing gear are some of the measures that can help minimize bycatch, advises Niedermueller.