Hospitals around the world are quarantining their surgeons after travel to coronavirus affected regions or are telling their surgeons not to travel at all. Luckily, there’s a way for them to keep in touch with their own surgeon teams or to “scrub in” with other teams around the world who may need their expertise. It only took someone who came over from the film industry to make it easier.

Daniel Goldberg isn’t from a medical field. He worked in technology for the film industry for many years before he was commandeered by surgeons. Those surgeons wanted a secure solution for streaming live video to their own experts but also to use for training new surgeons. The film industry already had solutions for doing this, says Goldberg. And it was a software fix.

Telehealth video-conferencing options don’t have the quality of video that surgeons need to really see what’s happening. Surgeons already have high-resolution cameras at their disposal. They’ve been using robotics in the operation room since 1985, but the da Vinci robotic system launched in 1999 is what really propelled the field forward.

What surgeons were looking for when they went to Goldberg was a way to securely send large video files and livestream with high quality video. The video that was being recorded was being underused because they were saved to physical storage. Since surgeons don’t have a lot of time, the videos are often left uncatalogued and essentially lost to the world. “The video is this incredible asset,” says Goldberg. “It tells the story of the surgery… like you see a tool being used, you see the patient’s anatomy.”

The solution he came up with was epiqar, a web-based video-conferencing system that plugs into existing camera equipment in the operation room. Surgeons can log into the system from anywhere with a good internet connection, and all the video gets filed to a central cloud storage afterwards. No more DVDs or USB drives cluttering shelves or collecting dust.

Surgeons calling in can see the entire operation room, as well as the live video feed from the robotic arms that are being used in the surgery. They can see in clear 4K resolution what’s happening in the organs of the patient.

“The way the web works has finally evolved so we can do this,” Goldberg tells Changing America. The system is based on software that works with equipment that anyone can purchase for audio like Bluetooth speakers and headphones. Even if a surgeon is in the same hospital, it may be easier to use epiqar than to spend time scrubbing in and out of the operation room.

Although it was not necessarily designed for an emergency setting, epiqar has become an important part of the coronavirus response. Goldberg says that one of the surgeons based in Paris who uses epiqar was recently quarantined after a trip to Venice. The surgeon was able to be in the operation room with his team through epiqar and everything could go as planned while keeping to health precautions. 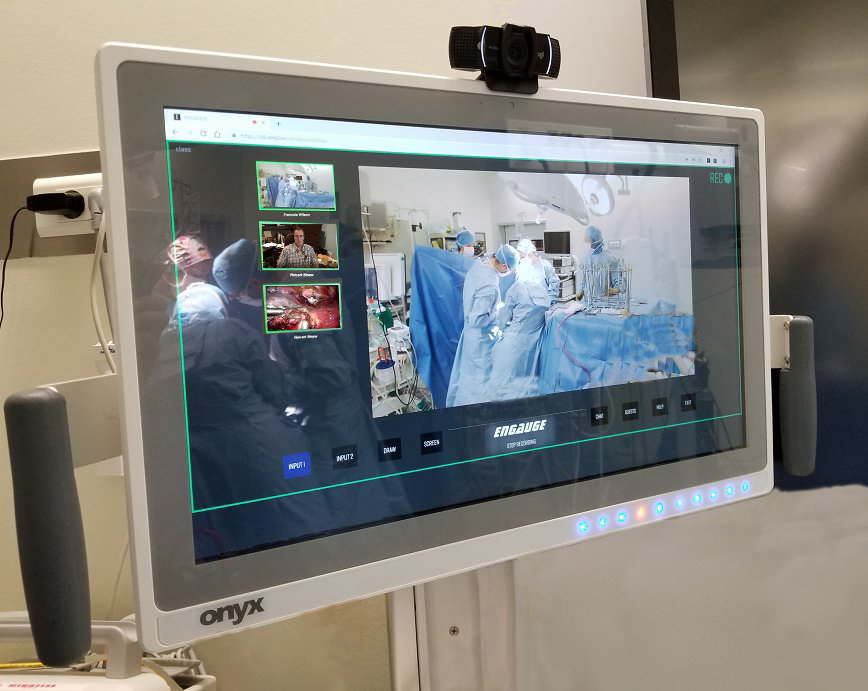 Recently, a hospital team in Nepal has requested epiqar for two of their operation rooms. “If people want to connect quickly, we don’t have to travel there to install it,” says Goldberg. Because it only requires a few simple pieces of equipment including a small waterproof speaker that can be disinfected and Bluetooth headphones to be used as a microphone, Goldberg can ship a small backpack that the team in Nepal can set up on their own. They could get online in a matter of minutes. And because epiqar is low-cost, meets all the most stringent requirements and is HIPAA compliant, any hospital can implement their system.

With hospitals in the U.S. preparing for coronavirus, it’s likely that surgeons may not be able to travel and some will need to be quarantined. Goldberg says, “I think we’re a perfect tool to bridge and connect in outside help, especially for those who are just exhausted and can use an angel over the shoulder or some extra insight while they’re working.”