The World Health Organization (WHO) recommends that screen time shouldn’t exceed 60 minutes per day for 3- to 4-year-old children, but there isn’t a lot of research out there that helps us understand what screens are really doing to young brains. A few recent studies provide a good place to start.

A study published in JAMA Pediatrics in November 2019 suggests that screen time could have broad impacts on brain development in children younger than 5. The study found an association between increased screen time and “lower microstructural integrity of brain white matter” that supports language and literacy skills.

The same group did a simultaneous study with the same group of children about the effects of reading on brain development and published the results in December 2019 in Acta Paediatrica. This second study focuses on how a nurturing home literacy environment (HLE) might affect brain development in young children ages 3 to 5 (before kindergarten). The researchers were specifically interested in how a good HLE might affect structure and connections in the brain’s white matter, the tissue made of nerve fibers that connect different parts of the brain.

Forty-seven children participated in the studies: 27 girls and 20 boys. For the screen time study, the researchers used a composite of 15 measures called ScreenQ that asks about access to screens, frequency of use, content viewed and coviewing. “There’s access to screens, which is where is the screen? Does it sit in the bedroom? Does the child have a device? Do they use it at meals?” says coauthor John Hutton of Cincinnati Children’s Hospital. Frequency is the number of minutes and content was split into TV shows and apps. “Then the last one is coviewing, which is if the child’s on a screen, are they watching with the parents, do the parents pick out what they’re watching?” says Hutton.

For the reading study, researchers asked how much the caregivers read to the children, the diversity of concepts and content, as well as quality or interaction during those sessions. The researchers tested the children’s cognitive abilities with four tests meant to assess their vocabulary, language processing and the Get Ready to Read! Test and The Reading House. Then they imaged the children’s brains using diffusion tensor magnetic resonance imaging (DTI), a type of magnetic resonance imaging (MRI) that is especially useful for looking at white matter. 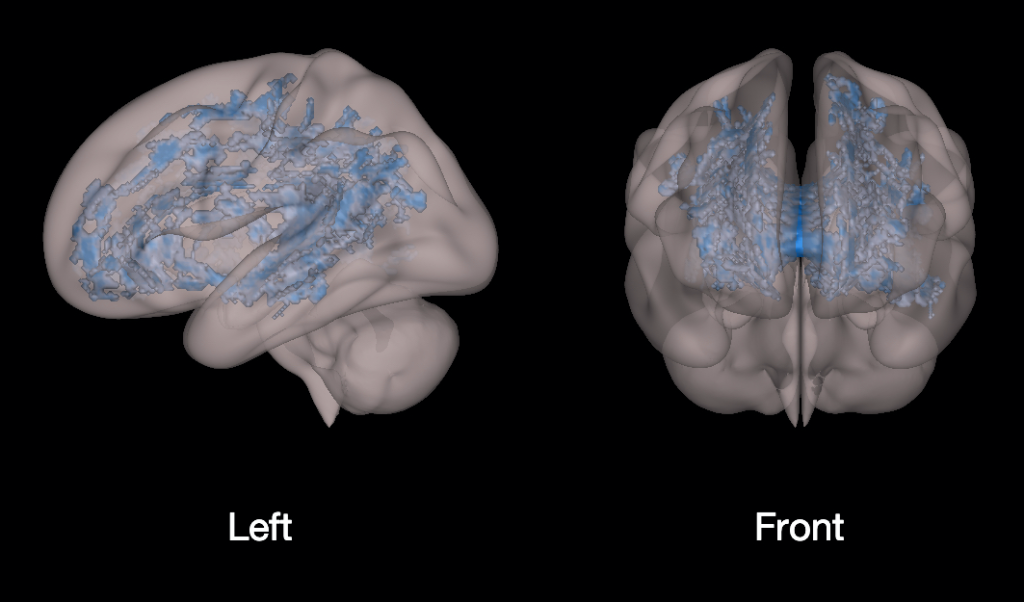 This next image from the reading study shows the organization of white matter in red from a child with a more stimulating HLE, also measuring the fractional anistropy. The white matter is more developed and organized, and less “leaky,” according to Hutton.

Intuitively, it would make sense that reading to a child often while they are young would help the child’s brain to develop the connections for language and language processing and that too much screen time could be affecting how brains are developing. This pair of studies are the first to show with imaging what the differences might be in brain development depending on exposure to reading and screen time. However, that doesn’t mean we can really say what the long-term implications are.

It’s especially complicated with screen time because it encompasses a large variety of experiences, and because screen time could be displacing many other types of behaviors and interactions that are not easy to capture in an experiment. “They’re probably displacing all kinds of experiences like playing with toys, and talking to grownups and going outside,” Hutton tells Changing America. And those types of changes and interactions add to the complexity.

The current recommendations from the WHO suggest no screen time for children under the age of 2. The WHO also recommends reading and storytelling with a caregiver during sedentary time. “I think the guidelines currently are reasonable,” says Hutton. “But they’re not really informed by mechanisms, what’s going on in the brain and what are we hardwired to really need in order for our brains to develop in the most healthy way.” There is an ongoing study of adolescent brains called the ABCD study, but it only focuses on children from about age 9 through early adulthood. What’s needed are longitudinal studies that can show the long-term changes in the brain from preschool age all the way through to adolescence, says Hutton.

Caregivers are invited to join the 21-day challenge through the Read Aloud 15 Minutes initiative!