The coronavirus pandemic has now affected people all over the world. Where did it come from, and why is it happening now? To get into these questions, I spoke to “Spillover” author David Quammen about his book and how it relates to the current COVID-19 pandemic.

Published in 2012, the book is about investigating the origins of infectious diseases that have spilled over from animals into humans, called zoonoses or zoonotic diseases. It reads like a collection of murder mysteries because it is just that, but with microbes as the murderers. Quammen meets the researchers and people who were involved with past outbreaks like Hendra virus in Australia and Lyme disease in the Northeastern U.S.

When he started reporting stories about zoonoses, Quammen says he viewed it as an ecology and evolutionary biology story. “Those are the dimensions that explain how these things begin, and why they begin and how we can prevent them,” says Quammen. Somebody’s got to go in caves in China or elsewhere, crawl around in there, catch some animals, take some blood and try to figure out who the reservoir host is.

In “Spillover,” we meet the people who lived through Hendra virus and Ebola virus outbreaks as Quammen meets them. It’s as human a story as this current COVID-19 pandemic is, but often looking back into history makes it less so. In Australia, Hendra virus originated in bats, and in 1994 crossed over into horses, killing the horses and a few people. Quammen walks the grounds where the horses and ranch owners walked. He speaks to the veterinary professionals who responded to the crisis.

Pathogens of infectious diseases don’t discriminate in these outbreaks. They don’t know if they are living in an animal or a human. Some of the microbes are bacteria or fungus, but many of them are viruses. From the book:

“Viruses face four basic challenges: how to get from one host to another, how to penetrate a cell within that host, how to commandeer the cell’s equipment and resources for producing multiple copies itself, and how to get back out – out of the cell, out of the host, on to the next.”

But don’t be lulled into thinking of viruses as agents of their own actions. One of the messages from the book is that we should not imagine that these viruses and other microbes have a deliberate strategy. “They don’t come after us. In one way or another, we go to them,” writes Quammen.

In this sense, the term zoonoses is misleading. It puts a lot of emphasis on the animal species that we get the pathogens from. But what’s at the heart of “Spillover” is that most spillover events are because humans have sought out animals as hunters and consumers of meat or humans have put animals in too close proximity to each other, giving way to disease-sharing opportunities.

Quammen puts it this way in a passage from the book:

In fact, there is no ‘natural world,’ it’s a bad and artificial phrase. There is only the world. Humankind is part of that world, as are the ebolaviruses, as are the influenza and the HIVs, as are Nipah and Hendra and SARS, as are chimpanzees and bats and palm civets and bar-headed geese, as is the next murderous virus — the one we haven’t yet detected.

Unfortunately, SARS-CoV-2, the virus that causes COVID-19, was not detected before the outbreak started, but it’s probably zoonotic. 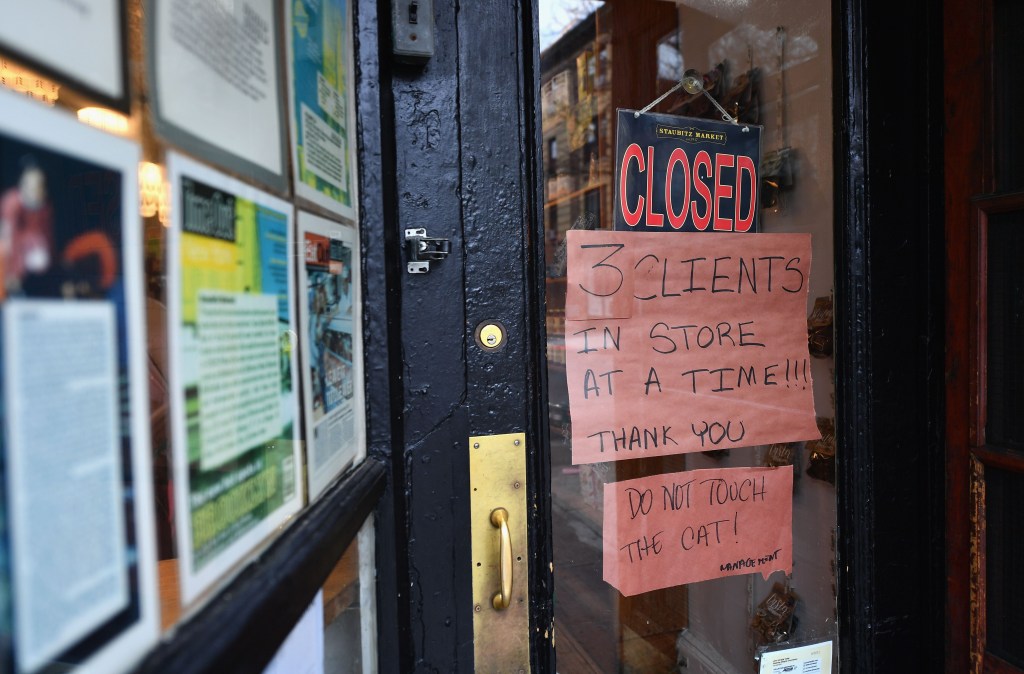 How do we know

It’s likely that SARS-CoV-2 came from animals. But that’s still something we assume and can’t know for sure until we’ve done all the necessary investigations. It’s named such because it causes similar disease in humans as severe acute respiratory syndrome (SARS). Granted, we have learned a lot since the SARS epidemic happened in 2003. At the time, experts didn’t know that SARS was caused by a virus until much later; with COVID-19, experts knew to look for a virus and found something similar to the first SARS coronavirus.

SARS was deadly, but luckily didn’t infect or kill that many people. There were 8,000 cases over the course of six months, and 774 people died from it. “If SARS had conformed to the perverse pattern of presymptomatic infectivity, its 2003 emergence wouldn’t be a case history in good luck and effective outbreak response,” Quammen wrote in his book. “It would be a much darker story.”

READ MORE OF OUR BREAKING NEWS ABOUT CORONAVIRUS

CAN LYSOL OR CLOROX KILL THE CORONAVIRUS?

IS CORONAVIRUS MORE FATAL TO MEN THAN WOMEN?

CAN YOU GET CORONAVIRUS TWICE?

WHY DOES IT TAKE SO LONG TO DEVELOP A CORONAVIRUS VACCINE?

We’re in the middle of that darker story with COVID-19, which is likely being spread in the community by asymptomatic people. In about five months since the first case, the coronavirus has infected nearly 210,000 people worldwide and killed more than 8,700 people.

Sometimes there is interest and effort, like with United States Agency for International Development’s (USAID) Emerging Pandemic Threats (EPT) program and in particular the PREDICT program which focused on funding research that would help understand the human-animal interface where disease can get transferred. During the first few years of PREDICT, I worked at a grantee organization, EcoHealth Alliance, which researches zoonoses and disease emergence. After that, I spent the better part of about five years working on a PhD on this very topic of trying to model the emergence of an infectious disease.

But prediction is hard. It requires a lot of data to do even somewhat well, and loads more data if you are aiming to provide useful knowledge. “Prediction, in general, so far as these diseases are concerned, is a tenuous proposition, more likely to yield false confidence than actionable intelligence,” writes Quammen. The real goal for many infectious disease researchers is to find out what pathogens are circulating in wild animal populations. Then we’d at least know the enemy. From “Spillover”:

When the next novel virus makes its way from a chimpanzee, a bat, a mouse, a duck, or a macaque into a human, and maybe from that human into another human, and thereupon begins causing a small cluster of lethal illnesses, they will see it — we hope they will, anyway — and raise the alarm.

Even with 10 years of data from wildlife like bats and birds, the PREDICT grantee organizations were not able to predict the specific virus that causes COVID-19. But what that research has shown is that there are plenty of viruses out there that we don’t know about, and many of them from the groups that have caused epidemics in the past like coronaviruses and Ebolaviruses.

SEE ALSO: When will the Wuhan coronavirus outbreak reach its peak?

Over the years, funding and political will has waned, for example USAID didn’t renew funding for EPT, and the White House’s disbanded the pandemic preparedness office.

It’s discouraging to watch this all happening, and Quammen is audibly frustrated at this point in our conversation. He tells me that he’s been asked many times, especially over social media, if he’d write an addition to “Spillover” to include COVID-19. His response to me: He’d only add three words, “I told you.”

Experts have been saying for many years that there could be a devastating new infectious disease (the Next Big One). But there still wasn’t enough knowledge and basic science to raise the alarm that this specific coronavirus was on its way. That’s not a blow to the researchers; it’s a sign that more people could be working in this field. In “Spillover,” epidemiologist Donald Burke at the University of Pittsburgh talks to Quammen:

The practical alternative to soothsaying, as Burke put it, is ‘improving the scientific basis to improve readiness.’ By ‘the scientific basis’ he meant the understanding of which virus groups to watch, the field capabilities to detect spillovers in remote places before they become regional outbreaks, the organizational capacities to control outbreaks before they become pandemics, plus the laboratory tools and skills to recognize known viruses speedily, to characterize new viruses almost as fast, and to create vaccines and therapies without much delay.

Experts didn’t predict COVID-19 specifically, but they predicted that something similar would come along eventually. “This thing is not a one-off case,” Quammen continues. “That’s not the end of this problem. This is part of a pattern. The pattern goes back a long time.”

As humans, we may not be able to break the pattern, but we can use our strengths to preempt it. Ecologist Greg Dwyer tells Quammen about gypsy moths and how their populations sometimes die off due to eating a fungus on the leaves they eat.

“There’s only so many ways gypsy moths can differ,” he said finally. “But the number of ways that humans can differ is really, really huge. And especially in their behavior. Right. Which gets back to your question, which is, How much does it matter that humans are smart? And so, I guess I’m actually going to say that it matters a whole lot. Now that I stop to think about it carefully. I think it will matter a great deal.”

Governments could support research not only when it’s an emergency, but also when it’s not an emergency. One thing we know about this outbreak so far is that it’s going to cause and it has already caused huge damage to economies around the world into global trade, Quammen tells Changing America. Whatever happens next in terms of stopping the spread is going to affect the level of fatalities. “But the real issue is what happens when COVID-19 goes away?” says Quammen.

Scientists and researchers have been saying that we need to be surveying the wildlife, we need to be putting money and resources into finding out what pathogens are out in wildlife and in domestic animals, says Quammen. “But they’re still like, how do we get people to listen?”

Maybe that’s the big question. We have enough knowledge to know that infectious diseases will keep jumping into humans because of the way we interact and live with domestic and wild animals. But what do we do with that knowledge?

For up-to-date information, check the websites of the Centers for Disease Control and Prevention and the World Health Organization.

THESE ARE THE 6 WAYS THE CORONAVIRUS PANDEMIC COULD END