A majority of voters said they support the idea of free state college and canceling student debt, according to a Hill-HarrisX poll released on Thursday.

The survey found that 58 percent of registered voters said they would support a proposal that would make public colleges, universities and trade schools tuition-free. The same group also said they would back a plan eliminating all existing student debt. 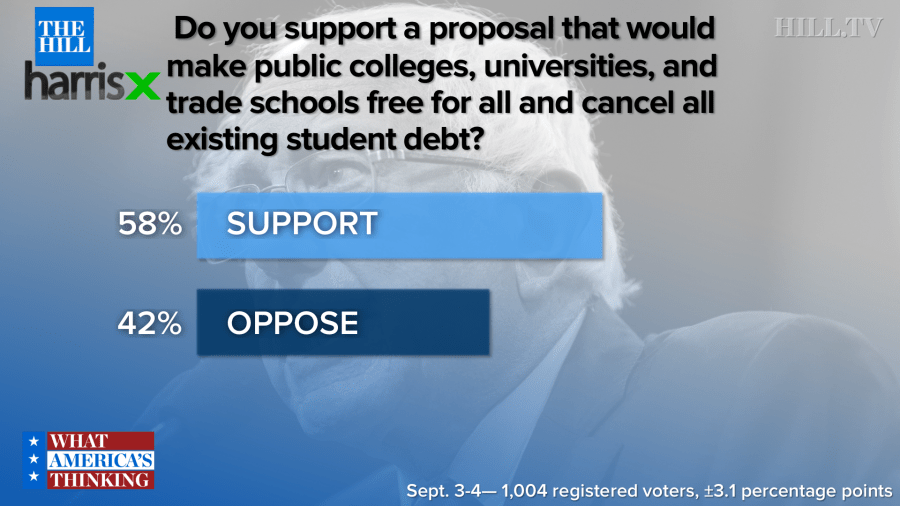 Forty-two percent of respondents said they would oppose such a proposal.

Democrats were more likely to support the idea of free state college and forgiving student debt.

Seventy-two percent of Democratic voters said they are in favor of making higher education tuition-free and eliminating student debt, compared to 40 percent of Republicans. Fifty-eight percent of independents, meanwhile, said the same.

When broken down by income, 67 percent of respondents who make less than $75,000 a year support such a proposal, compared to 51 percent who made $75,000 or more on an annual basis.

Sanders’s plan would also make two- and four-year public and tribal colleges and universities both tuition-free and debt-free.

Even though the college proposal boasts strong support among progressives, other Democrats have some reservations over concerns that Republicans could seize on the idea and use it against Democrats in the 2020 elections.

The Hill-HarrisX poll was conducted online among 1,004 registered voters between September 3 and September 4. The poll has a margin of error of plus or minus 3.1 percentage points.