The poll of likely Democratic and independent voters found that 31 percent support Biden for president, a 4-point increase from the last time the poll was conducted in late August. 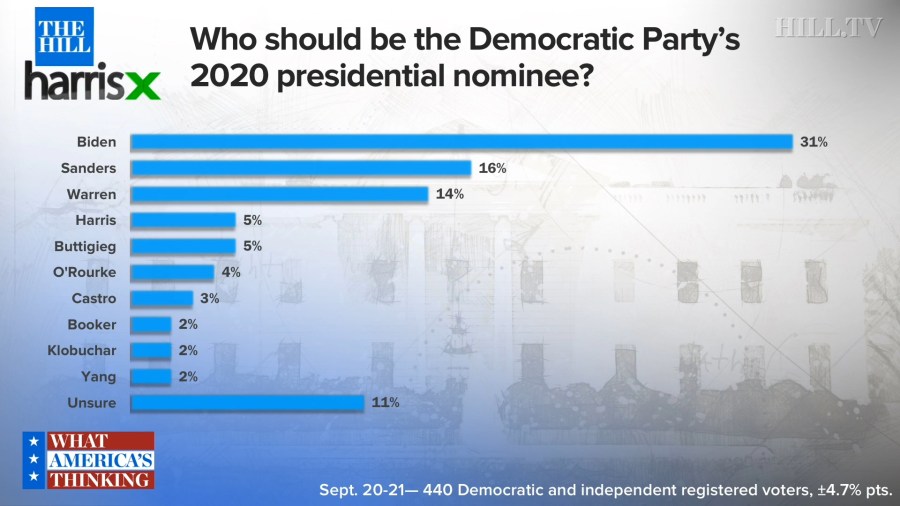 Sanders came in second with 16 percent, while Warren followed in third place with 14 percent.

Though still within the margin of error, this uptick in support for Biden is a positive for a campaign that is trying to hold off Warren.

Former entrepreneur Andrew Yang dropped back to 2 percent after previously climbing to 5 percent.

The only other candidates to poll at least 2 percent or higher were Sen. Cory Booker (D-N.J.), Amy Klobuchar (D-Minn.), and former Housing and Urban Development Secretary Julián Castro.

HarrisX researchers surveyed 440 Democratic and independent voters between Sept. 20 and Sept. 21. The margin of error for this poll is plus or minus 4.7 percentage points.

De Blasio, who first launched his bid in May, announced the news on MSNBC’s “Morning Joe,” and vowed to continue his work as mayor of New York City.

“It’s clearly not my time, so I’m going to end my presidential campaign, continue my work as mayor of New York City, and I’m going to keep speaking up for working people,” he said at the time.