Support for various forms of universal health care has declined since earlier this year, according to a Hill-HarrisX poll released on Tuesday.

The nationwide survey found that 62 percent of registered voters support some form of universal health care, a 9-point drop from a similar survey in February. 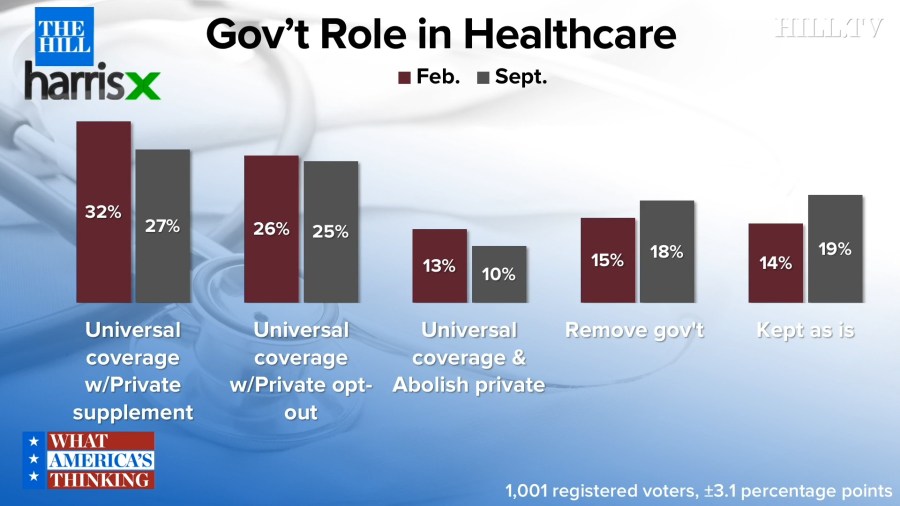 Another 10 percent supported a plan most closely aligned with Sen. Bernie Sanders’s (I-Vt.) “Medicare for All” proposal, which would provide universal coverage and effectively abolish private insurance.

Medicare for All has been co-sponsored by several of Sanders’s fellow Democratic presidential candidates.

Progressive rival Sen. Elizabeth Warren (D-Mass.) has thrown her support behind the proposal — which seeks to eliminate private insurance in favor of a single-payer, government-run plan — but has faced scrutiny over how’d she pay for it.

Former Vice President Joe Biden has made the financing issue central to his attacks on Medicare for All, saying that, unlike Warren, Sanders has at least acknowledged that middle-class taxes would have to go up.

That increase is seen as a positive for Biden, who has pledged to build on and expand the 2010 Affordable Care Act.

Sen. Kamala Harris (D-Calif.), who co-sponsored Medicare for All in 2017, said during a campaign fundraiser last month that she is not “comfortable” with Medicare for All.

Sanders later hit back, saying the U.S. needs a health care system that will “guarantee affordable health care for all, not just for those who can afford it.”

The Hill-HarrisX survey was conducted online among 1,001 registered voters from Sept. 20-21. It has a margin of error of plus or minus 3.1 percentage points.

14 hours ago
Rising
2 days ago