Support for universal basic income (UBI) is on the rise, according to a new Hill-HarrisX poll released on Wednesday.

The nationwide survey found that 49 percent of registered voters are in favor of a government-issued basic living stipend, which marks a 6-point spike compared to a similar survey in February. 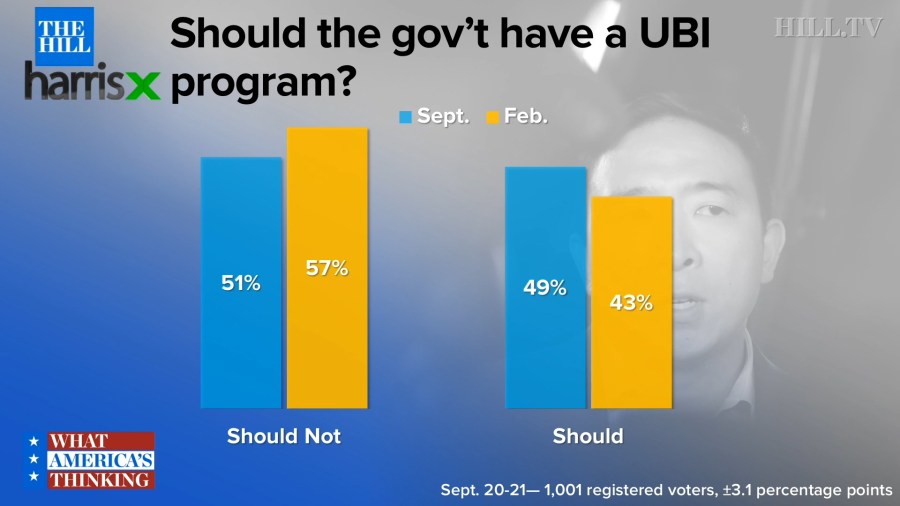 Those who oppose the plan dipped from 57 percent to 51 percent.

Support for UBI remains particularly popular among young people. Seventy-two percent of those between the ages of 18 to 34 favor the idea.

But the proposal still isn’t as highly favored among older generations of Americans — only 26 percent of those 65 and older back a UBI program.

Democrats’ support for UBI increased from 54 percent to 66 percent, as did support among independents which ticked up to 48 percent.

Thirty percent of Republican respondents, meanwhile, said they would support a UBI plan.

Democratic presidential candidate Andrew Yang has centered his outsider campaign on a version of universal basic income, which pledges to give every American adult $1,000 a month.

The entrepreneur has touted the plan as a way to tackle the rising threat of automation.

During his opening remarks at the third Democratic debate, Yang debuted a pilot program for his universal basic income plan, calling on Americans to enter a giveaway to become one of 10 families to receive $1,000 a month for a year.

Though Yang said that his campaign received more than 500,000 entries for the contest, the plan has generated some criticism from his fellow contenders, including top-tier candidate Sen. Bernie Sanders (I-Vt.).

Sanders told Hill.TV last month that while there is “no question” that automation will have a fundamental impact on Americans, he argued that “people want to work,” and to “be a productive member of society.”

Yang fired back saying the Vermont senator ignores several benefits of his UBI proposal, including its aim “to create hundreds of thousands of local jobs,” and “to recognize and reward the nurturing work being done in our homes and communities every day.”

The Hill-HarrisX survey was conducted online among 1,001 registered voters between Sept. 20-21 with a margin of error of plus or minus 3.1 percentage points.