Slightly more than half of voters say the House should cancel its current two-week recess and begin impeachment proceedings as soon as possible, according to a Hill-HarrisX poll released Monday.

The survey found that 54 percent of respondents said they would support lawmakers returning to Washington now to advance the impeachment inquiry, compared to 46 percent who disagreed. 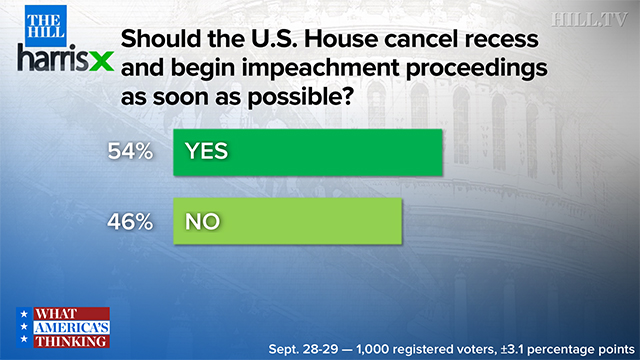 Support for canceling the break was strongest among Democratic voters, at 77 percent.

Among GOP respondents, 36 percent said the House should cancel its recess, with 45 percent of independent voters agreeing.

The margin of error for partisan voters was plus or minus 5.8 percentage points.

Several Democrats last week called on House leadership to cancel the recess and proceed with the impeachment inquiry.

Rep. Ro Khanna (D-Calif.) said in a video posted to social media that lawmakers need “to stay in Washington to work for the American people,” adding that “we need to do the work to hold this president accountable.”

However, House Majority Leader Steny Hoyer (D-Md.) has made it clear that there are no plans to cancel the recess, saying the break provides a chance for lawmakers to discuss the issue with their constituents.

“I do not expect to cancel the break,” Hoyer said on Wednesday. “This is a matter of grave importance, and the American people need to understand what is occurring.”

Lawmakers, meanwhile, are slated to return to Washington the week of Oct. 14.

The Hill-HarrisX survey was conducted among 1,000 registered voters from Sept. 28-29. The overall poll has a margin of error of 3.1 percentage points.