Poll: Majority of independent voters want GOP to retain control of Senate in 2020

A majority of independent voters prefer that Republicans retain control of the Senate in the 2020 elections, according to a new nationwide survey released on Tuesday.

The Hill-HarrisX poll showed that 54 of registered independent voters support Republicans keeping the Senate, compared to 46 who preferred that Democrats win back control of the upper chamber. 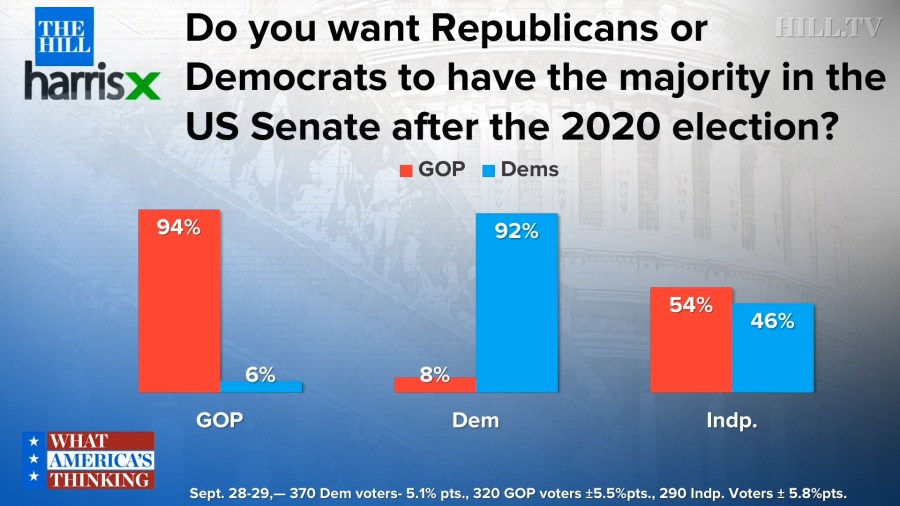 Ninety-two percent of Democratic voters, meanwhile, want their party to retake the Senate.

The margin of error for partisan voters was plus or minus 5.8 percentage points. There were 370 Democratic voters, 320 Republican voters and 290 independent voters.

The GOP currently holds a 53-47 majority in the Senate, which means Democrats need to win back just a few seats to flip the chamber.

A handful of Senate seats are already up for grabs in deep-red states like Georgia that experienced closer-than-expected races during the last election cycle.

A special election will be held in November 2020 to fill the remaining two years of Isakson’s term. This means Georgia voters will cast ballots for both of the state’s Senate seats in 2020, when Sen. David Perdue (R-Ga.) is also up for reelection.

Sarah Riggs Amico, a Democratic candidate for Georgia Senate, told Hill.TV last week that she is optimistic about her chances against Perdue, saying Democrats’ potential take back of the Senate could very well come from those two races in the state next year.

The Hill-HarrisX survey was conducted among 1,000 registered voters from Sept. 28-29. It has a margin of error of plus or minus 3.1 percentage points.