Former Vice President Joe Biden is the top pick among black voters, with a 24 point lead over his closest competitor in the 2020 Democratic primary field, according to a new poll.

A Hill-HarrisX survey found that 36 percent of registered black voters said they want Biden to be the party’s nominee, followed by Sen. Bernie Sanders (I-Vt.) with 12 percent support. 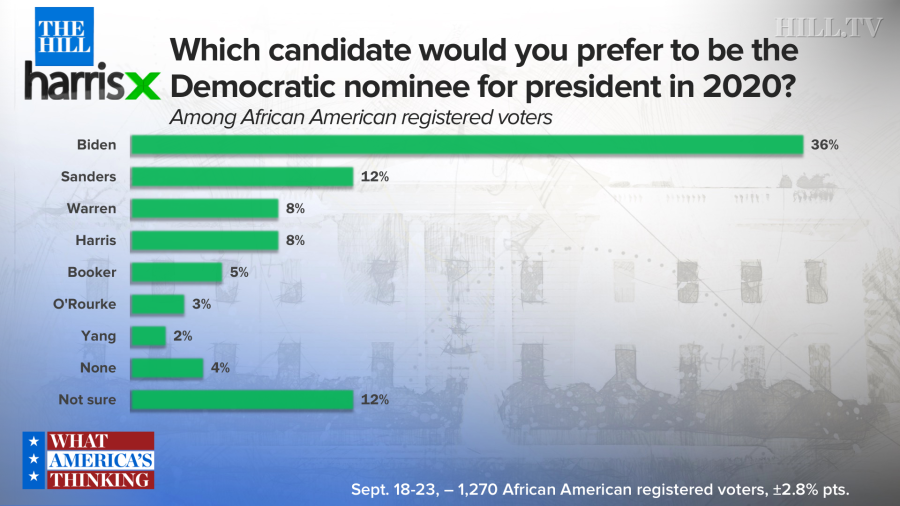 Sen. Cory Booker (D-N.J.) was next with 5 percent, followed by former Rep. Beto O’Rourke (D-Texas) at 3 percent and entrepreneur Andrew Yang came in at 2 percent.

Twelve percent of respondents said they weren’t sure, and 4 percent said none of the above.

The rest of the field, including candidates like South Bend, Ind., Mayor Pete Buttigieg, polled at 1 percent.

The survey comes as White House hopefuls vie for the support of black voters, a crucial voting bloc in the Democratic Party.

Though Warren didn’t receive double-digit support in the Hill-HarrisX poll, other surveys have shown the Massachusetts senator gaining ground after struggling with the key demographic over the summer.

According to a Quinnipiac poll released last week, Warren’s support among black voters climbed to 19 percent, a 9-point increase since August.

The Hill-HarrisX survey was conducted among 1,270 African American voters from Sept. 18-23. The margin of error is plus or minus 2.8 percentage points.

21 hours ago
Rising
4 days ago