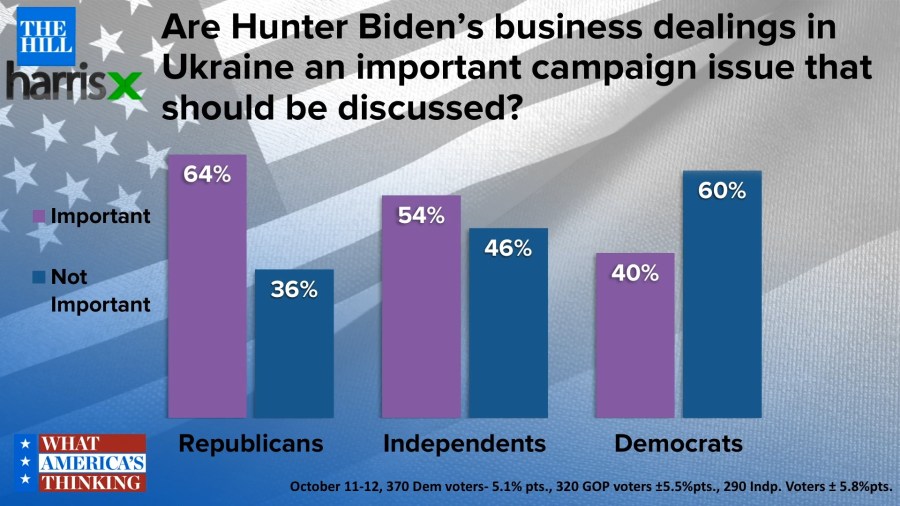 Respondents overall were almost evenly split on the issue.

In an interview with ABC News that aired Tuesday morning, Hunter Biden said he made a mistake by getting involved with foreign companies before considering the political implications. But he maintained that he did not engage in any wrongdoing.

“I gave a hook to some very unethical people to act in illegal ways to try to do some harm to my father,” he told the network. “That’s where I made the mistake.”

Hunter Biden also took aim at President Trump and his allies, who have seized on his business dealings to paint the Biden family as corrupt.

“What I regret is not taking into account that there would be a Rudy Giuliani and a president of the United States that would be listening to this ridiculous conspiracy idea,” he said.

The interview came just hours before the fourth Democratic debate in Ohio, where Joe Biden will take center stage.

“Mr. President, telling lies about Joe Biden won’t protect you from the truth,” Sen. Kamala Harris (D-Calif.) tweeted earlier this month. “Joe has more patriotism in his pinky finger than you’ll ever have.”

The Hill-HarrisX survey was conducted online among 1,001 registered voters. The margin of error for the full sampling is plus or minus 3.1 percentage points.