Poll: 14 percent of GOP voters say Trump should be impeached

Fourteen percent of Republican voters said in a recent Hill-HarrisX poll that President Trump should be impeached and removed from office.

The survey, released Monday, was conducted before acting White House chief of staff Mick Mulvaney said last week that aid for Ukraine was linked to Trump’s desire for the country to pursue a political probe related to the 2016 election.

Still, the 14 percent GOP support for impeachment marks a 2 percentage point increase from a Sept. 26-27 poll that was taken just days after Speaker Nancy Pelosi (D-Calif.) launched a formal impeachment inquiry into Trump over his dealings with Ukraine. 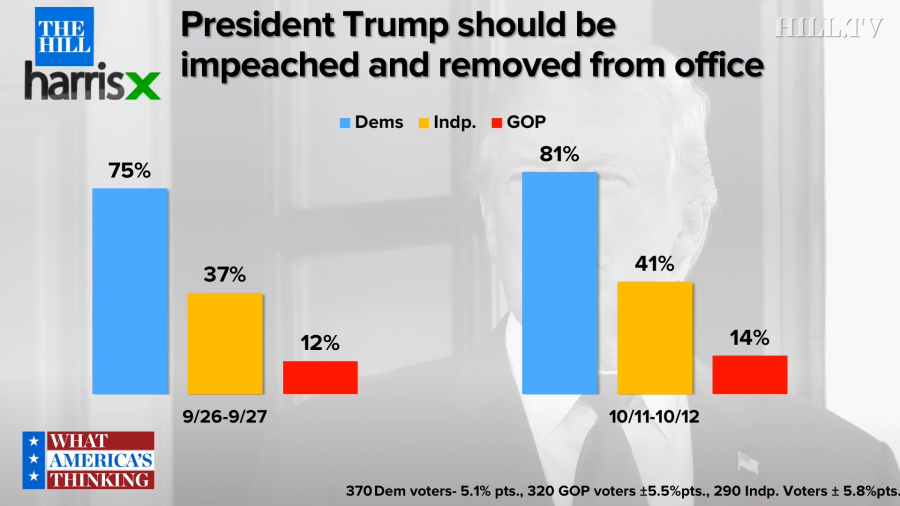 Overall, 47 percent of voters in the Oct. 11-12 survey support impeachment, a 4-point increase compared to the September poll.

Support for impeachment among Democratic voters also increased, to 81 percent from 75 percent in the previous survey. Meanwhile, the share of independent voters who favor impeachment rose 4 percentage points to 41 percent.

Mulvaney sparked a firestorm Thursday when he publicly undercut Trump’s repeated denials that there was any quid pro quo during his July 25 phone call with Ukrainian President Volodymyr Zelensky. Mulvaney later issued a statement walking back his remarks and accused the media of taking his remarks out of context.

He then went on to defend himself in an interview with “Fox News Sunday,” insisting that he never said the administration expected a quid pro quo.

“Can I see how people took that the wrong way? Absolutely,” Mulvaney told host Chris Wallace. “But I never said there was a quid pro quo because there isn’t.”

The controversy surrounding Mulvaney comes as Trump calls on fellow Republicans to stick together and fight against the Democratic-led impeachment inquiry.

“We have some that are great fighters, but they have to get tougher and fight because the Democrats are trying to hurt the Republican party for the election, which is coming up,” the president said Monday at a Cabinet meeting.

HarrisX researchers surveyed 1,001 registered voters. The margin of error for the full sampling is plus or minus 3.1 percentage points.

1 day ago
Rising
3 days ago