The Hill-HarrisX survey showed that 19 percent of Democrats and Democratic-leaning independents backed Warren, a 4-point increase from an Oct.6-7 poll conducted before last week’s Democratic debate in Ohio. 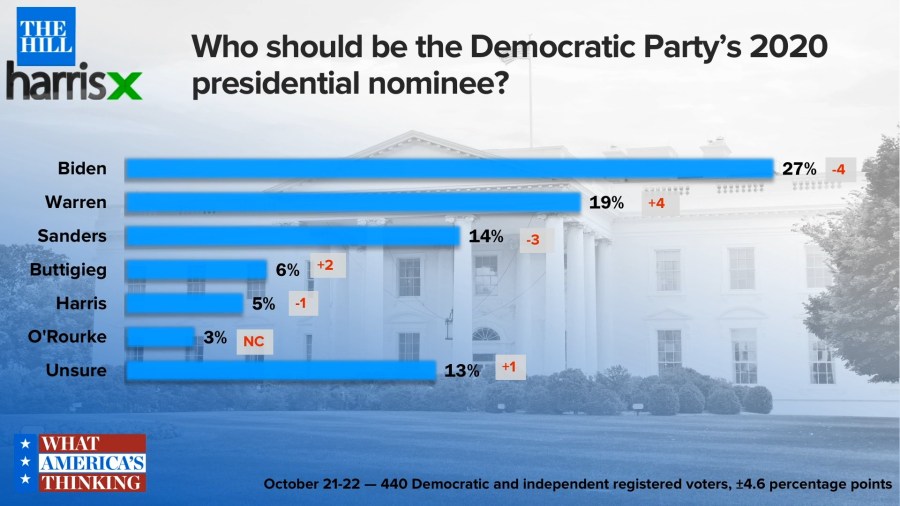 Sanders’ support, meanwhile, dipped from 17 percent to 14 percent among those polled.

Entrepreneur Andrew Yang drew 2 percent. The rest of the White House contenders running in the Democratic primary polled at 1 percent or less.

Thirteen percent said they were unsure.

The survey comes a week after 12 Democratic contenders took the debate stage for the fourth Democratic primary debate, where Warren leaned into her new front-runner status and fended off attacks from rivals.

Centrist candidates, including South Bend, Ind., Mayor Pete Buttigieg (D) and Sen. Amy Klobuchar (D-Minn.), accused the progressive heavyweight of not being transparent with voters about her plan’s cost, specifically over whether it would include tax hikes on the middle class.

Though Warren largely dodged questions about her plan’s cost during the debate, Warren said over the weekend that she would soon release a proposal detailing how she would pay for her main health care plan.

Medicare for All has emerged as a leading point of contention among White House hopefuls.

While the progressive wing of the party has doubled down on its support, more moderate candidates have increasingly gone on the attack.

The Hill-HarrisX poll surveyed 1,0001 registered voters between Oct. 21 and Oct. 22. The margin of error is plus or minus 3.1 percentage points.