Most Democrats say they would vote for a democratic socialist

Most Democrats would back a democratic socialist for public office, according to a Hill-HarrisX poll released on Wednesday.

The survey found that 75 percent of Democratic voters said they would support a candidate who embraced the label, while 26 percent of Republicans and 36 percent of independents said the same. 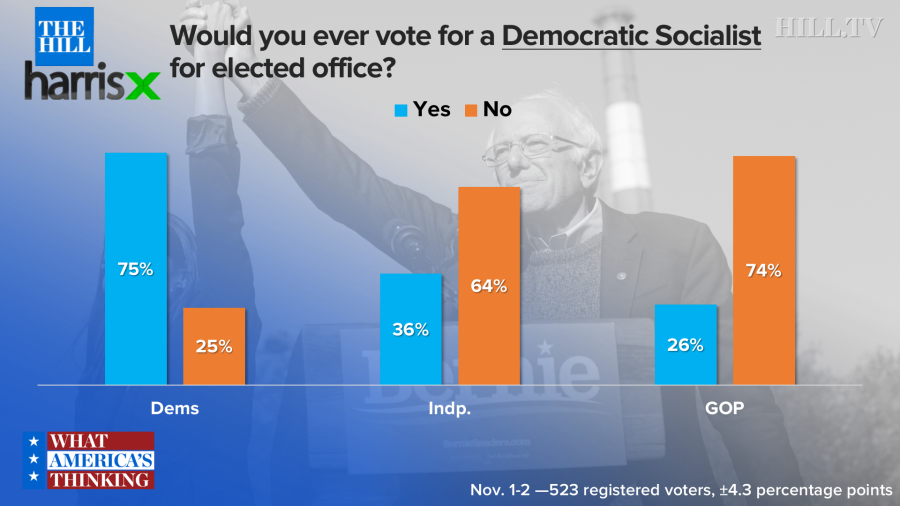 Younger voters were also more likely to throw their support behind a self-described democratic socialist.

However, voters were nearly evenly split on the term overall: 48 percent of those polled said they would support a democratic socialist, while 52 percent said they would not.

The survey comes as a number of progressive Democrats, including Alexandria Ocasio-Cortez (D-N.Y.), embrace the label.

Sen. Bernie Sanders (I-Vt.) has become one of the most prominent democratic socialists in the country as the only Democratic presidential candidate to self-identify as one in the 2020 race.

Over the summer, Sanders defended his core political philosophy following criticism from Republican and even some of his Democratic presidential opponents who have branded it as being too radical.

The Vermont senator cast his democratic socialist agenda as a continuation of former President Franklin Roosevelt’s New Deal that would expand economic rights and counter President Trump’s brand of nationalism.

The Hill-HarrisX survey was conducted online among 523 registered voters between Nov. 1 and Nov. 2. The margin of error for the full sampling is plus or minus 4.3 percentage points.