Support for former Vice President Joe Biden has hit record low of 26 percent, according to a new Hill-HarrisX poll released on Thursday. 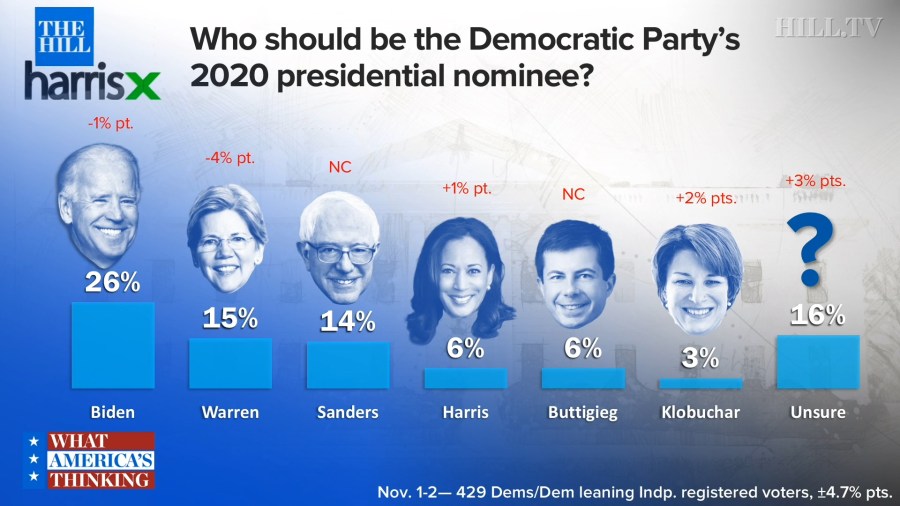 Warren slipped from 19 percent to 15 percent in the latest survey, but maintained her spot in second place, with Sanders trailing behind 14 percent.

Every other candidate in the 2020 race polled at 1 point or less.

Meanwhile, the number of voters who are unsure about which candidate should be the nominee increased slightly from 13 to 16 percent.

The survey comes as a number of 2020 Democratic contenders gear up for the presidential primary debate in Atlanta.

Rep. Tulsi Gabbard (D-Hawaii), who among the candidates polling at 1 percent in the latest Hill-HarrisX poll, became the latest candidate to qualify for the Nov. 20 debate.

Gabbard made the stage after receiving 3 percent support in a Quinnipiac University poll focused on Iowa that was released on Wednesday. She will join Biden, Warren, Sanders and Buttigieg. Businessman Tom Steyer and tech entrepreneur Andrew Yang are also poised to take the debate stage.

To qualify for the debate this month, candidates have to accrue support from at least 165,000 unique donors and resister at least 3 percent in four qualifying polls or 5 percent in two early state polls by Nov. 13.