Trump approval among women hits lowest point in more than a year: poll

President Trump’s approval rating with women has sunk to its lowest point in more than a year, according to a Hill-HarrisX poll released on Monday.

The new nationwide survey found that just 37 percent of women said they approve of the job Trump is doing as president, while 63 percent said they disapprove. 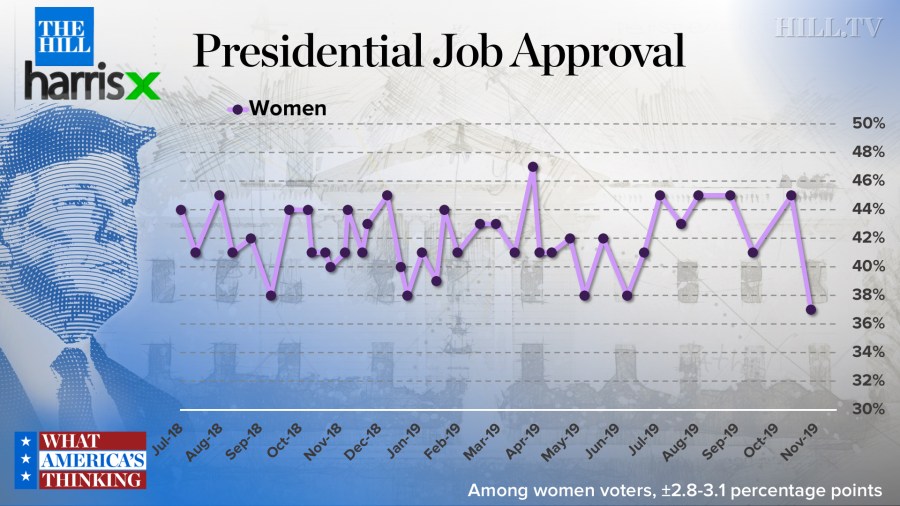 The new approval rating among female respondents is down from 44 percent in July of 2018.

Women, especially suburban women, are considered a crucial voting bloc ahead of the 2020 elections.

In August, Trump’s reelection campaign announced an initiative to help mobilize suburban women in key battleground states across the country.

“Women for Trump” aims to target female voters in suburban districts in at least 13 states, encouraging them to support Trump and other Republican candidates up for reelection.

Women played a key role in Democrats’ take-back of the House in the 2018 elections. CNN exit polls showed that women supported Democrats over Republicans by a 19-point margin.

The Hill-HarrisX survey was conducted online among 1,204 voters between Nov. 8 and Nov. 9. It has a margin of sampling error of plus or minus 2.8 percentage points.