43 percent of voters say government should be spending more on public programs: Poll

A plurality of voters believe that the U.S. government should be spending more on public benefits like food stamps and social security, according to a Hill-HarrisX poll released on Friday.

The nationwide survey showed 43 percent of Americans are in favor of increasing government spending on social programs, compared to 26 who say officials should be spending less.

Another 31 percent of those said that the current spending on public assistance was just “about right.”

The issue largely divided voters along party lines. A majority of Democrats — 60 percent — said the government should be investing more on these types of programs, compared to 27 percent of Republicans and 39 percent of independents. 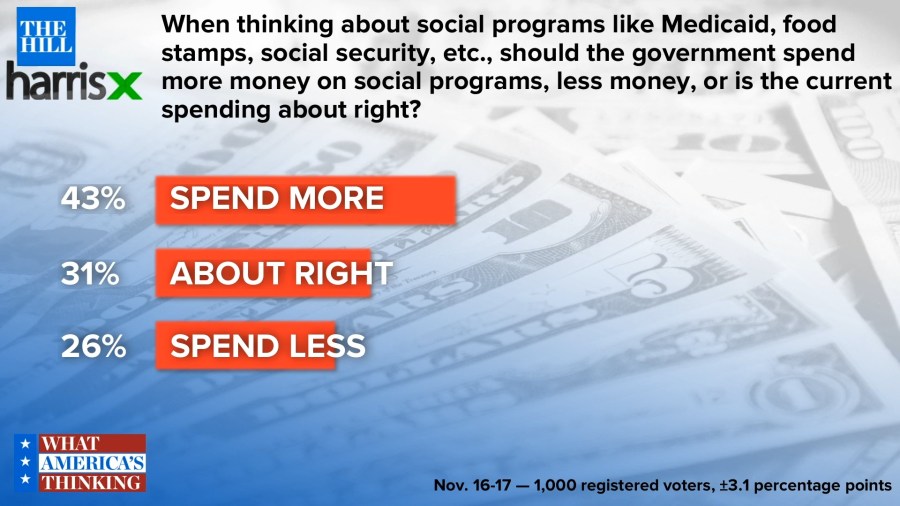 The Trump administration has used certain social programs as a way to crack down on the nation’s immigration system and limit legal immigration.

In August, the Trump administration changed the definition of the nation’s long-standing “public charge” rule by linking one’s immigration legal status to their use of certain public programs.

Under the new definition, any immigrant who receives at least one designated public benefit— including Medicaid, food stamps, welfare or public housing vouchers — for more than 12 months within any three-year period will be considered a “public charge.” This change effectively makes it easier for immigration officials to deny visas or green card status to immigrants.

The public charge rule was subsequently subject to nearly a dozen lawsuits in federal courts across the country and enforcement is currently on hold.

Critics of the move say the policy unfairly targets low-income communities and people of color, preventing many from accessing the food or care they need.

The administration has stood by the rule, characterizing it as a way to promote sufficiency and independence among immigrants.

Researchers surveyed 1,000 registered voters voters from Nov. 17–20. The results have a margin of error of 3.1 percentage points.